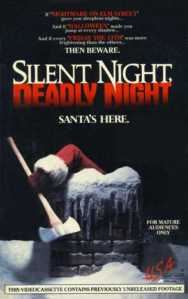 I enjoy a good B-movie, especially one built around a specific holiday (of course the only one I can think of right now is Mother’s Day but I know there are others out there).  Tonight’s Christmas film is the B-movie, cult classic, Silent Night Deadly Night.  This movie is extremely hard to find, there’s no US DVDs available and the way I watched it was in several parts on YouTube but boy is it worth it!  The movie is laughably ridiculous, filled with gratuitous female nudity, and a very mixed message on sex and religion.

When little Billy Chapman (played as an adult by Robert Brian Wilson) sees his parents viciously murdered by a man dressed as Santa Claus, he comes to haunt the holiday and the man in red.  Growing up in an orphanage under the strict eye of Mother Superior (Lilyan Chauvin) doesn’t do much to help his psyche.  When he comes of age and gets a job at a toy store things seem to be looking up, until one Christmas Eve when he’s tasked to dress up as Santa for all the little kids, triggering his tortured past and compelling him to kill those who are “naughty.”

Your enjoyment of this movie is directly related to whether you enjoy cheap horror with little plot and enough cheese to fill a cracker platter.  The opening sets the tone as little Billy (played with extra cuteness by Jonathan Best) and his family go to visit his grandfather in a mental institution.  Grandpa is generally catatonic but as soon as the parents leave, leaving little Billy with a mentally unstable old man, Grandpa tells him “the real story” of Santa, the man who severely punishes those who are naughty.  As Grandpa cackles “If you see Santa, you better run” Billy appropriately enough mentally craps his pants and becomes terrified of the man in red.  As if the poor kids day couldn’t get any worse he gets to witness his father getting shot and his mother being assaulted and killed.  Obviously he grows up a  bit disturbed.

When we move forward in time, to Billy as an 8-year-old with a sweet mullet, grows up under the strict eye of nuns.  The Mother Superior frowns on all types of sin, mostly the carnal kind, and punishes Billy constantly.  I mean this kid goes through the ringer and when sweet Sister Margaret (Gilmer McCormick) says Billy’s tormented by his parents death, everyone says it’s ludicrous that Billy would be traumatized, he probably doesn’t even remember it!  I know kids aren’t very bright at a young age but I sure as hell know a five-year-old kid would probably remember watching his mother be thrown to the ground and having her throat slit!  It’s this type of logic you have to laugh at in order to enjoy this movie.  It’s this segment of the movie that also details that “punishment is good,” confusing Billy even further that punishment is not only associated with Santa, but God as well.

So I won’t spoil the rest of the movie but suffice it to say Billy snaps and kills a lot of people.  The movie is only an hour and twenty minutes so the killing comes fast, furious, and creatively.  If you’re a fan of the remake to My Bloody Valentine, you’ll love this.  The love of boobs in this movie is displayed in every scene as literally every woman (I take that back, the nuns don’t get naked) dies sans top.  Scream queen star Linnea Quigley, famously opens the door without a shirt and in Daisy Dukes, while a blizzard swirls around her, to get a cat!  Yep every person under the age of 35 is a horny person ready to get their comeuppance.

That’s where the questions over plot happen.  We’re led to believe that Billy is punishing the “naughty” (just the use of the word is sexual in this film) which is mainly anyone who has sex and is mean to him, yet he punishes people for doing absolutely nothing!  Poor Pamela (Toni Nero), the girl Billy loves is set to be raped by a co-worker who Billy kills, I get that.  But when Pamela freaks out (as is to be expected considering said coworker has just been strung up like a deer right next to her) and hits Billy, he kills her!  She almost gets raped and she’s not only killed, but killed with her breasts out.   I think someone has some Madonna/whore issues to work out.  One of the cops tasked with taking Billy down also dies…for just doing his job!  If you’re going to give a character a mission in these types of movies, have them to stick to it or risk alienating the audience for thinking he’s a dick.

This is a great movie to watch with your friends and do a little Mystery Science Theater 3000 with.  Throughout the whole movie I was cracking jokes (which is never fun to do alone) and making observations.  I know there’s several sequels which I honestly have no interest in because I’m sure they take themselves way too seriously.  What’s funny is that this movie was demonized when it came out in 1984, the same week as Nightmare on Elm Street, and another film with similar tones called Christmas Evil was ignored.  I don’t understand the problem with making Santa an axe murderer, I mean the original Tales from the Crypt film had Santa kill in “And All Through the House” and that came out in 1972.  Silent Night, Deadly Night isn’t a classic by any means, but it’s consistently enjoyable, and laughably campy.  Watch (or at least YouTube) the scene of Jonathan Best gasping when he sees his mother “acting naughty,” it’s hysterical!