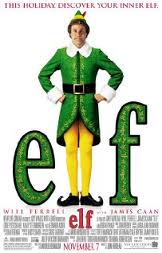 As we get set to conclude my first 25 Days of Christmas series, I just want to wish everyone a Merry Christmas/Hanukkah/Kwanzaa!  We have one more film to discuss on Christmas Day but I wanted to get that out-of-the-way!  After this we’ll get right back into finishing the last 11 My Month with Marilyn movies and then it’s up to you to tell me what you want me to discuss next.  But I’m getting ahead of myself.  Let’s discuss the best Christmas to come out in the last ten years, Jon Faverau’s Elf!

Buddy (Will Ferrell) is a human raised by elves in the North Pole.  He’s always felt different and when it’s revealed he’s human he goes off in search of his father Walter Hobbs (James Caan) who’s a book publisher living in New York City.  The problem is that Buddy doesn’t know how to act in the human world and constantly aggravates Walter.  In spite of all that Buddy falls for the beautiful Jovie (Zooey Deschanel) and ends up saving Christmas.

I mentioned the other day with A Charlie Brown Christmas the angle of trying to find the true meaning of Christmas.  While Elf continues in that vein it also rehashes the story element of being an outsider and saving Christmas as a means of discovering one’s identity.  Before director Jon Faverau was making movies like Iron Man, he made kids films.  I love his underrated adaptation of Zathura, and I adore Elf!  Buddy is the most loveable, vulnerable character in the world and his lines are side-splitting.  From his introduction of “Buddy the elf, what’s your favorite color” to insulting author Miles Finch (Peter Dinklage) by calling him an elf, you’re never against his character.  He’s the guy everyone knows who really LOVES Christmas…only it’s literal in this sense due to his upbringing.  The world of the elves is also detailed and sweet.  Bob Newheart plays Papa Elf, Buddy’s adoptive father, while Ed Asner (who I always see now as Carl Fredrickson from UP) is Santa Claus.  You can tell Faverau has a love of Rankin-Bass in how he has Buddy interact with CGI puppet-characters reminiscent of the Rankin-Bass films, “see you Mr. Narwhal.”

The story has heart and charm and just goes down like a warm cup of hot chocolate.  The plot is contrived and formulaic sure, and Deschanel is sweet but she’s not very memorable in this movie (aside from her singing voice) but it’s the best Christmas movie out there.  I dare you to find someone who can’t quote this movie incessantly (“you smell like beef and cheese, you don’t smell like Santa”).  So after the presents are open make sure to watch Elf, I’d be surprised if you haven’t already.

We conclude with today’s entry, coming later, on the animated version of Dr. Seuss’ How the Grinch Stole Christmas, so make sure to take a moment to look at that.  From me to you, I wish everyone a Merry Christmas and thanks for following!