The amazing Monty, writer over at All Good Things is sending all bloggers on a vacation…a cinematic one that is.  Throughout the summer (or more specifically May 28th-September 3rd) I’ll be going on vacation with the aid of my DVD player.  Let’s get on our hovercraft and make the first stop at the theme park of Delos….we couldn’t afford Disneyland.  Yes, it’s Westworld!  I’ve heard of this sci-fi take on Disneyland but hadn’t actually experienced it until today and boy did I have fun (sadly I wasn’t allowed to bring Yul Brynner‘s robot head as a souvenir).  So sit back, and get ready to go to the old West courtesy of Westworld!

In an unspecified future a theme park called Delos allows visitors to experience three worlds: Roman World, Medieval World, and West World.  In these resorts robots acting the parts of the area are present and the visitors are able to have sex, rule, and even kill at their discretion with no harm to anyone else.  The robots though are starting to malfunction and when a robotic Gunslinger (Yul Brynner) in Westworld starts to hunt down two guests (Richard Benjamin and James Brolin), the vacation abruptly ends.

The movie itself expertly sets up the world you’re about to enter with an advertisement talking about how great Delos is, “Delos is the vacation of the future, today. At Delos, you get your choice of the vacation you want.”  The movie is a thinly veiled satire against Disneyland, in fact writer and director Michael Crichton (yes the author of Jurassic Park) was inspired to write the movie after riding Pirates of the Caribbean!  Glad to know there are others who fear those Audio-Animatronic’s getting up and wreaking havoc one day!   The film has Crichton’s fingerprints all over it.  In fact the infamous line in Jurassic Park “if the Pirates of the Caribbean breaks down, the pirates don’t eat the tourists.”  That might be happening in this case haha.

The film’s script, again written by Crichton, blends the everyday discussions of two modern men with the Old West and the technical jargon the scientists.  There’s a lengthy scene where the scientists are discussing the malfunctioning of the robots that’s pure Crichton if you’ve read his books.  It’s complex, confusing, and filled with terms that make no sense.  In essence, it’s a scene meant to show off how smart and the scientists (and the author is).  It makes little difference to the average viewer, and the guests at the resort, but underneath that dialogue is the basic idea “The robots are gonna rise up and kill people!”

I did enjoy how the film presents both sides of the Westworld experience.  Not only do you get the story of Peter (Richard Benjamin) and John (James Brolin) but you also get to see the world behind the facade.  There’s a beautiful shot of the repair center where all the robots are taken in.  It’s white, clean, a la a spaceship, and allows the audience to see “the man behind the curtain.”  That’s something that I love about Disneyland, that behind the rides is a complex world maintaining the illusion.  When the resort guests are asleep there’s a scene of large trucks coming in and rounding up the “dead” robots and taking them back for maintenance.  It’s not too far removed from the trucks and other machinery that lumbers through the streets of Disneyland to clean up.  It’s a moment of anachronism that works in blending the modern and the past in one moment.

The whole concept of Delos is akin to Hostel in today’s day (albeit smarter and less gory), in that the whole appeal is allowing adults to indulge in their fantasies without fear of repercussion.  In fact one of the men interviewed in the intro says proudly he killed six people but “they aren’t real people.”  Throughout the film not only are the guests able to kill but they’re able to bed whoever they want, see throughout the movie as the (predominantly male) cast have sex with prostitutes and serving wenches.  No one stops to appreciate the level of detail in the environment they’re in or do the things people generally do on vacation…relax!  In watching the first few minutes of the movie I found myself asking why there were no children present considering this is a theme park.  Nope, it’s hedonism in Delos so be sure to prepare to a party the likes of which you’ve never seen and for only $1,000 a day (wonder what that would be in today’s dollars?).

I have to wonder if this film is an attack on Vietnam considering the Paris Peace Accords had been signed a few months before the film’s release.  The controversial Straw Dogs, a film also steeped in Vietnam discussion, had come out two years before.  There’s something to said about placing Westworld in this vein.  The film follows men, the only women being sex objects, and focuses on two men indulging their inner savagery (and considering they go to the Old West, their masculinity is tested) and being repelled by an adversary smarter and more complex than them.  Those behind the scenes, controlling the puppets, lose control rather quickly and for all their technological prowess are unable to resume control.  I’m sure someone has gone in-depth into this but it’s worth thinking about.

In setting up the world you start to lose sight of the plot, which I think is the film’s big flaw.  I was so consumed in wanting to visit Delos and exploring the world behind the scenes that I didn’t really care for Peter and John’s story.  They’re fairly stereotypical characters with Peter as the shy guy using Delos to find himself and John being the cocky ladies man.  Again, I have to wonder if there are connections to Vietnam in their characters.  The film becomes a Western with the introduction of the Gunslinger, played with steely fear by Yul Brynner.  You also get the occasional trip to Medieval World where the plot involves a guest turned king and his attempts to seduce a young woman.  It’s a pretty sexist storyline but hey it goes with the territory I guess.

I also was left with some questions that aren’t answered.  Like why do the robots in Medieval World NOT have British accents?  Delos prides itself on authenticity and yet no one in this take on medieval Britain sounds like they’re from there?  No, the people all sound the same like they’re from California!  With that, there’s mention of the fact that no one knows who is a resort guest and who is a robot (aside from their hands).  In that case, when Peter and John start a brawl and start shooting people, what’s to prevent them from shooting and killing a guest?  They don’t know unless they look at everyone’s hands.  That was the plot point that really irritated me. 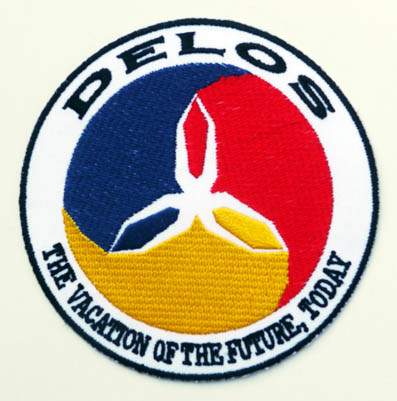 So be sure to book your vacation to Delos and just sit back and believe that “nothing can go wrong” (yeah right!).  Westworld is a fun movie.  It’s not as smart as I’d have liked but the concept of a theme park gone rogue is a fun one, the movie is a tight 90 minutes, and the story is incredibly engaging.  I’d definitely book my vacation to Medieval World (barring that whole crazy robot problem is still going on)!  I’ll be back with my vacation reports as the Cinematic World Tour Blogathon continues!