Seems that the film reviews have taken a backseat over the weekend (my last film review was Friday’s rather scathing look at Beach Blanket Bingo) but it’s always nice to take a break.  I return with a film far better than BBB, it’s the 1957 movie The Three Faces of Eve.  You might remember this taking a slot in my TCM Top Twelve in May that I mentioned had a similar title to All About Eve which confused me.  Well having seen this there’s no more confusion.  I enjoyed The Three Faces of Eve a great deal, especially Joanne Woodward‘s Academy Award-winning performance.  I do find a bit too much fairy dust sprinkled on the ending but don’t want to jump ahead!

Eve White (Joanne Woodward) is a meek housewife suffering from blackouts and memory lapses.  When her husband sends her to psychiatrist Dr. Curtis Luther (Lee J. Cobb) he discovers Eve suffers from Multiple Personality Disorder.  Under moments of stress Eve White becomes Eve Black, a rebellious unmarried version of herself.  With Eve’s husband threatening to leave her, she and the doctor must figure out the reason for her multiple personality.

I’ve always been fascinated by tales of multiple personality, mainly because there’s still a lot of back and forth on whether it even exists.  I know the go-to movie is generally the Sally Field 1970s film Sybil but The Three Faces of Eve doesn’t try to exploit or make light of the personalities.  With more recent looks at MPD (like Showtime’s United States of Tara) the emphasis is on the funny side of the personalities like the young rebellious one or the prim and boring one.  While Three Faces of Eve has those, they aren’t meant to be humorous but to us them as off-shoots of Eve’s own personality.  Eve Black may be rebellious and highly sexual but she also tells Eve White the harsh truths she doesn’t want to face, like the fact she’s in an unhappy marriage and she should take her child and leave.

The most intriguing element of the personalities here is what they represent about 1950s housewives.  Keep in mind this movie came out six years before Betty Friedan‘s breakthrough novel The Feminine Mystique which broke down the walls on the lives of 1950s housewives, lives lived “in quiet desperation.”  Here you see that in the various personas Eve takes on.  Eve White is the pure (white imagery obviously), mousy, meek, and above all dutiful wife to Ralph (David Wayne).  When Ralph finds a bed full of dresses Eve Black has bought, Eve White believes they’re presents from her husband that she would have returned because they cost too much.  She’s afraid of her husband and does everything he tells her, including going to a doctor to remove these harmful (and non-conforming) personalities.

Eve Black is the easy-going, fun, sexually promiscuous girl not constrained by marriage or children.  In her view Eve White is the married with children one, not her.  The black imagery implies more manipulative means and a dark side.  She’s not bound by convention and that makes her dangerous.  She places herself in harmful situations with men that would take advantage of her and by her revealing wardrobe, she’s a woman no man respects.  When Even Black transforms to Eve White, the latter immediately starts to cover herself.  When Ralph decides to let Eve Black stay (and the implication is because there’s more sex going on) and discovers she’s wild and wanton, he slaps her.  She’s not his wife technically and a woman who lacks respect from men.  Yet underneath all the debauchery Eve Black is the smarter of the dual Eve’s.  She knows more about Eve White than Eve White does.  Eve Black knows there’s no love in this marriage and that Eve White doesn’t love her husband, she does “because she thinks she ought to.”  The dual personas shown her show the mental strain and collapse of having to divide oneself to please family and friends.  There’s been a lot written about the various roles of a 1950s housewife: a nurturer for children, a sex kitten for the husband, and the perfect woman for friends all of which weighs down on Even causing her personalities to literally divide and become separate entities.  And yet the introduction by Alastair Cook seems to contradict all that by describing Eve as a monster.  Equating her as possessing “one personality more than Dr. Jekyll.”

Not only do we see Eve suppressing herself but there’s also a bit of suppression in the character of Ralph, Eve’s husband.  In the beginning of the film you don’t know whether to sympathize or hate Ralph.  I mean he’s a jerk to be sure, but you have to see what he’s going through.  A wife with a different personality, never knowing when the other will come out (and the other ends up trying to harm their child).  As the film progresses he does become a character that is unsympathetic, deciding to abandon his family and taking up with Eve Black (which is disturbing on so many levels because where is Eve White in all this…trapped or buried in the mind?).  When Ralph gets mad and slaps Eve Black, it’s obvious it’s been brewing for a while.  He’s been suppressing his violent side which is finally unleashed due to Eve Black’s wild side.  They’re two powder kegs coming together.

The acting here is unparalleled especially by Joanne Woodward.  Woodward wasn’t the first choice.  Originally Judy Garland was meant to be in the role but her real-life issues with alcohol were making her unreliable (although I can only imagine what a Three Faces of Eve film starring Garland would look like).  Woodward though is astounding.  This is the first film of her’s I’ve seen and the various transformations she puts herself through in this are great.  She has to play quiet, brash, and proper in the same person!  Once Eve Black starts tricking people into thinking she’s Eve White there’s an added element of layering as she has to be another personality imitating another personality within a personality!  Wow, it’s Inception literally!  She definitely deserved the Oscar for this performance and it shows in the work!

Honestly the only problem I have with this film regards the ending!  The third personality is obviously the “right” one down to the bland name of Jane!  In stark contrast to the other two personalities is that where Eve Black/White transform through appearance (Eve Black taking clothes off and vice versa), with Jane the transformation is in language.  When Jane comes out she speaks eloquently and with no Southern twang like the other two have!  It’s obvious this is what we want the final outcome to be and the end does wrap things up nicely in a bow with the source of the personality divisions being discovered and the other Eves being cast out.  Jane goes off with her daughter and marries a nice man and things are apparently fine.  Mental illness eradicated in 105 minutes!  It’s a bit too clean and polished for my tastes, especially considering the real woman this movie is based on said the film was very different from her experience. 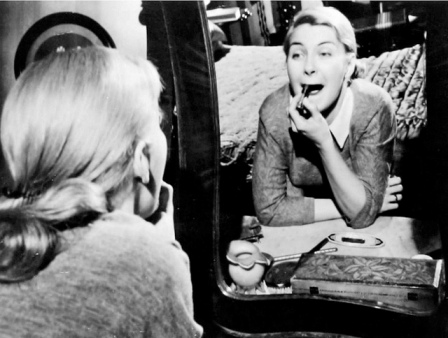 Regardless of the ending, what precedes that is well-done.  Joanne Woodward makes you believe every personality she has, especially the crass Eve Black (who steals the show).  Lee J. Cobb is also great as the psychiatrist trying to put her back together.  All in all, a fine look at the 1950s housewife by way of multiple personas!