I’m late, I’m late, for the final poll update!  Like the rhyme scheme I got going?  I think as we get into the final weeks of polling I’m going to be letting loose as things come to an end.  With that being said I’m trying to figure out how the final polls will go once all the finalists are decided.  I’m debating whether to have one week’s poll being the winners from 1930-1960 and the second week being 1970-2010 or integrating four different decades between two polls (poll one including 30s, 50s, 70s, 90s and poll two being 40s, 60s, 80s, 2010s).  Let me know which one you like best in the comments.  Click after the jump to see where the final numbers stand right now!  The winner of the 80s will be declared this Sunday!

As it went with Paul Newman last week, it’s going to take a lot of manpower to kick Harrison Ford off his perch.  The actor is still in the lead with 11 votes, up 3 from Tuesday (pretty good boost) that’s still 52% of the current vote with quite the disparity between first and second.  I don’t want to declare Ford a winner hook, line, and sinker but it’ll take some rigging of the numbers if anyone else is going to win.

We do have a new leader for second place in that we have a tie!  Michael Douglas is still a contender for silver with 3 votes (there’s still quite a distance between second and first) 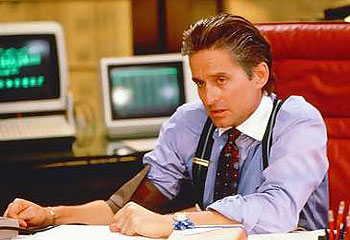 but he’s also going to have to duke it out with John Cusack (happy birthday by the way) who moved up one point from two votes to three.

as Michael J. Fox has not only gained a vote, he’s gained two to tie him with Mr. Tom Cruise!  Yay, I would have felt really bad if Fox ended with nothing.  He doesn’t look like he’ll be winning but tying with Tom Cruise is an accomplishment!

The winner will be declared Sunday!  Still plenty of time to vote!