Oh is there a lot going on in the TCM world this month.  If you don’t know (and if you don’t you’re not a TCM fan), August is the month of Summer Under the Stars: 31 Days and 31 stars.  Where each day has a slew of films devoted to a particular person.  With that I’ve bent the rules a bit for this edition of The TCM Top Twelve.  You’ll still see twelve movie recommendations but I’ll be including six stars who I’ll be attempting to devote my entire day too (it helps me too from having twelve movies devoted to one star).  Let’s see what’s going in August!

I’ve seen the remake of this film but never the original.  The quirky story of a family of twelve has to be funnier in the 1950s and in a day devoted to Myrna Loy, it was hard for me to narrow my choices down to just one.  Considering that Loy excelled at playing a wife and mother, à la Mr. Blandings Builds His Dream House, I’m sure I’ll find this tale heartwarming, not to mention I constantly get this confused with Yours, Mine, and Ours.  Cheaper by the Dozen airs during a day devoted to Myrna Loy (see below) on August 2nd at 9:45pm. Ms. Myrna Loy is a Journeys in Classic Film inaugural Hall of Fame inductee so it only makes sense that I’ll be sitting down on August 2nd to watch as many of her movies as I can.  The ones I’ll be rewatching include: Libeled Lady, Wife vs. Secretary, The Bachelor and the Bobby-Soxer (my FAVORITE with Cary Grant), Mr. Blandings Builds His Dream House, and The Thin Man.

Here’s another Hall of Fame inductee, in fact Ms. Marilyn holds the highest number of movies by any actor on the Hall of Fame I’ve seen.  After you’re done watching all her movies on August 4th (the 50th anniversary of her death) be sure to come back and read all my reviews in the My Month with Marilyn collection.  I’ll be rewatching The Prince and the Showgirl, Gentlemen Prefer Blondes, The Seven Year Itch, Some Like It Hot and There’s No Business Like Show Business.

Now, Voyager is one of those films I always get told to watch.  In some circles I’m deemed “not a true classic film fan” for not seeing this.  I will be checking it out purely to indulge my increasing admiration for Bette Davis who is a few films away from entering my Hall of Fame.  The plot according to TCM discusses a spinster being transformed by psychiatry and the love of a married man and you know I’m all about lurid plotlines.  Considering how well-respected this film is I don’t necessarily think it’ll be lurid but I’m all for a love story that might not have a happy ending.  Now, Voyager airs during a day devoted to Claude Rains on August 5th, at 1:45pm.

There’s something about the plot of Down to Earth that makes me want to see it.  You know I have a thing for campy plots!  The plot to Down to Earth tells of a goddess of dance (I’m assuming Rita Hayworth) coming down to Earth.  Do I detect snippets of my favorite 80s movie Xanadu in here?  I’ve only see one Hayworth  film so far, The Lady From Shanghai which is also on during Rita Hayworth day, but I’m interested in seeing her comedic timing and musical qualities.  Even if the plot is ridiculous I’ll probably enjoy the dancing.  Down to Earth plays during a day devoted to Rita Hayworth, August 8th at 7pm. 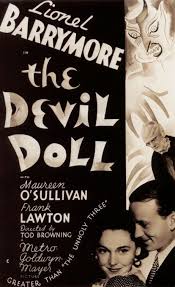 I always try to find one crazy horror type movie to add to my Top Twelve and this month we get The Devil Doll.  First off, any movie about crazy dolls gets a pass from me because dolls are creepy to begin with.  Second of all, The Devil Doll is directed by Tod Browning, a master of horror in my opinion who crafted the amazing Freaks and Dracula.  The plot involves shrinking people down to doll size which is laughably crazy but I’m sure Browning pulls it off.  You can catch The Devil Doll on August 10th, in a day looking at the films of Lionel Barrymore, at 4:15am.

Despite playing during Lionel Barrymore day I’m going to watch Mata Hari for Greta Garbo.  I have a few Garbo films set aside so I haven’t been able to judge her talent, but I’ve been interested in seeing this film ever since a clip was used in Harriet the Spy (yes it’s there!).  The story of Mata Hari is fascinating and while this is a Hollywood depiction so I’m sure liberties will be taken, Garbo will excel.  Mata Hari airs right after The Devil Doll, at 5:45am.

A Star is Born is the quintessential Hollywood story; thus I must see it.  I’ve seen the 70s version with Barbra Streisand and hated it so I’m hoping Judy Garland can convey me to love it.  I’ve never seen Garland post-Wizard of Oz but I’ve heard this is the film to watch.  Not to mention seeing James Mason in Lolita, I’m interested in seeing him play something other than a skeeze.  A Star is Born airs during James Mason day August 11th, at 7:45am.

Primrose Path enters this list courtesy of Monty over at All Good Things who reviewed it and recommended it over at his website.  I’m growing to love Ginger Rogers and this film sees her as one in a long line of prostitutes trying to get out of the game.  I don’t know what it says about me that I love classic films that deal with prostitution, probably because they only allude to it, but I’m interested in seeing more of Rogers’ dramatic work.  Ginger Rogers gets two places on this list as you’ll see next, but Primrose Path airs August 12th, at 11:30am.

Much like Myrna Loy I singled out a movie and gave Ginger her own day on this list.  There were far too many Rogers films I wanted to see and really August 12th gives audiences a bit of everything from Rogers including her dramatic work, her comedies, and her dance films.  In terms of what I’ll be watching I’m hoping to etch out time for Kitty Foyle, Shall We Dance, Swing Time and 42nd Street and I hope to rewatch Stage Door.  August 12th stay at home!

I’m taking a gamble with Tea and Sympathy considering it’s directed by Vincente Minnelli who I have a spotty relationship with, some of his movies get me and others I despise.  Tea and Sympathy is mentioned in my review of The Celluloid Closet for its early depictions of homosexuality, something I find (alongside prostitution) interesting in how it’s depicted in films.  It also has a storied Broadway history which should open it up to fine acting.  I’ve only seen one Deborah Kerr film, The Innocents, which I’m sure is a far cry from this.  This airs August 13th at 7pm during a day devoted to Kerr herself. James Cagney isn’t one of the Summer Stars I’m highlight but he does have the distinction of being the subject of the TCM Top Twelve monthly documentary.  James Cagney: Top of the World is a 1992 documentary hosted by Michael J. Fox discussing Cagney’s life.  I know Cagney for his gangster roles and know nothing about his personal life so while this doc is dated it should still provide me with a lot of knowledge about the star himself.  James Cagney: Top of the World airs during James Cagney day on August 14th at 4pm. 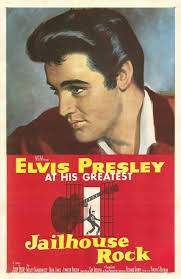 Elvis Presley.  Great singer, so-so actor.  At least that’s what I’ve gathered having only seen Viva Las Vegas, which does air during this day looking at Presley’s films.  I’m not sure exactly why I’m interested in seeing another Presley film, probably to see if he can give me a film I love and who doesn’t love singing “Jailhouse Rock?”  If anything the movie will be a campy delight of 1950s juvenile delinquency with a boppy soundtrack.  Jailhouse Rock airs August 16th at 6:45pm.

I HAD to tape this, not just for Katherine Hepburn, another Hall of Fame inductee, but in the interest of history.  If you read my review of Elizabeth awhile back you’ll know I love the Tudors but they don’t seem to be portrayed well in film.  Mary, Queen of Scots, is probably the worst of the bunch in terms of her depiction and the synopsis for this film made my head spin: “Biography of the flighty Scottish queen who was brought down by love.”  No she wasn’t!  I’ll be sitting during this nitpicking and looking at the gross historical inaccuracies while praising Hepburn I’m sure.  Mary of Scotland airs August 17th at 6:45am. If there’s a Katherine Hepburn day I’ll be there.  Katherine is slowly becoming one of my top favorite actresses and an inaugural Hall of Fame inductee.  Her day on TCM, August 17th, shows off her work as a serious actress, a comedienne, her films with Spencer Tracy and Cary Grant.  New films I hope to see include Woman of the Year, Pat and Mike, and Morning Glory.  Rewatches include Adam’s Rib, Guess Who’s Coming to Dinner, Little Women, and Bringing Up Baby.

Yes Jack Lemmon is the only male I picked out as a Summer Star but that’s a worthy distinction for an amazing actor.  Lemmon is one of an amazing group of actors who could play comedy and drama in equal measure and that’s show during his day on August 22nd.  The Apartment and Days of Wine and Roses are rewatches.  I’d love to see The Fortune Cookie and The Great Race as first-time views.

Another Rita Hayworth film but this time it’s on during a day looking at the  films of Gene Kelly.  I’ve seen about two minutes of Cover Girl but unfortunately it had problems on Netflix and I couldn’t finish it.  The plot follows a model gaining fame and leaving her boyfriend behind who I’m assuming is Kelly.  There’s nothing wrong with Kelly and Hayworth dancing with a Hollywood story.  Cover Girl airs August 23rd (right before Singin’ in the Rain which I recommend) at 5pm.

I haven’t seen many of Dunne’s films but I’m interested in seeing a lot more which is why I added her day, August 24th, to my final list of Summer Stars.  The two rewatches I’m hoping to catch are My Favorite Wife (which I recently reviewed) and The Awful Truth.  I’m also hoping to see Life With Father for the first time.

The Razor’s Edge was a last minute edition but I’ve heard nothing but amazing things about this.  Not to mention it has the lovely Gene Tierney who I’m hoping to see some more films from.  The Razor’s Edge airs during a day marking Tyrone Power’s body of work on August 25th, at 5pm.