A surprising fact: The 1978 movie with the same name isn’t a remake of this 1943 film!  In fact, aside from both dealing with death and the afterlife, there’s nothing similar in plot or story between the two.  The 1978 film Heaven Can Wait is actually a remake of the 1941 film Here Comes Mr. Jordan.  So I’m kind of confused, as I was when I taped this film, as to why the 78 film borrowed this title?  I don’t have the answer but the 1943 version of Heaven Can Wait is an adorable film.  Director Ernst Lubitsch and screenwriter Samsom Raphaelson craft a film that doesn’t go where you expect.  For all the talk in the beginning of how bad our protagonist is, he never quite lives up to that badness.  Certainly not enough to go to Hell.  Let’s look at the beautiful world of the living that proves heaven can wait!

Playboy Henry Van Cleve (Don Ameche) has recently died and recounts the story of his life to the master of Hell, His Excellency (Laird Cregar) in order to prove he belongs “down below.”  Told in flashback we see Henry go through life drinking, lying, and pulling one over on his family time and again.  Things change when he meets the beautiful Martha (Gene Tierney) who forces him to change his life.  With each birthday that passes Henry continues to make mistakes but tries his hardest to keep Martha’s love.

There’s a lightness and whimsy about death that’s created within the film’s opening moments.  We meet Henry Van Cleve as he’s entering Hell, a place that looks majestic and akin to a nice office.  He’s meeting the Devil, here known as His Excellency and he’s not petrified unless you factor in the weird, and oddly lascivious looks Laird Cregar gives the characters in his few scenes (it doesn’t help that Cregar has a ton of makeup on).  In many ways His Excellency is a diplomatic man who knows Henry doesn’t truly belong in Hell but will indulge him in his tale anyway.  If anything Lubitsch and Raphaelson create an afterlife that’s non-denominational and pleasant, even if you’re going to Hell.  There’s even an air of indifference to Henry’s death itself as he exuberantly tells His Excellency that he’s there because he at “everything the doctor forbade” and he only knew he was dead once he heard people say nice things about him setting up the life of Van Cleve himself.

From there we flash back in time to the birth of Henry Van Cleve (and since the film is based on a play called “Birthdays” events take place around Henry’s birthdays) and to the “first woman I ever fooled” aka his mother.  The family dynamic is established hilariously from the go with Henry’s mother, grandmother, and father letting him get away with murder.  The only one able to see Henry for who he is, is his grandfather Hugo (Charles Coburn).  Coburn is one reason to watch this film because every line, every single line, is funny as hell.  As Hugo becomes further irritated at Henry’s antics, the funnier his lines become.  One theme of the entire family is how polite they all try to be, whether they’re insulting you or not and Grandpa is the one character content to knock everyone off their holier than thou perch.  When he sees the uptight cousin Albert (Allyn Joslyn) Grandpa insults him to hilarious effect, “Albert, I’m struggling successfully against the gout, I’m waging a terrific battle with my liver, and I’m holding my own against asthma, but I doubt if I have strength enough to survive your jokes. You’re a successful lawyer. Let it go at that. I love you, Albert.”  The “I love you” is what’s funny as if it’s meant to make all his preceding statements and the insult forgivable!

Henry’s parents are funny in terms of how they indulge Henry and have zero ability to discipline him.  Henry’s father puffs himself up telling his wife Henry asked for$100 but he only gave him $50…”and not right away.”  When Henry does do something right and tells hi mother about a girl he met, his mother immediately believes he’s done something horrible because of all his past misdeeds.  Henry’s past life of insolence ends up salting many of his relationships as those he loves (Hugo, Martha) end up knowing all his tricks which only furthers the pain when he tries to pull one over on them.

The introduction of Ms. Gene Tierney sets everything in motion and can I say GENE TIERNEY IS STUNNING!  I remember her being gorgeous in Laura, but she is breathtaking!  It also helps that she gets the ability to flex her comedic timing with this film and while her lines aren’t side-splitters it’s her ability to work with the script’s comedy of manners that works to her advantage.  A particular scene has her detailing to Henry why she’s marrying Albert, as a way of getting out of Kansas.  The way she moves back and forth saying she loves Kansas but doesn’t want to live there and how she fears she’ll die an old maid….in Kansas is hilarious.  Watch the scene below and tell me this beauty didn’t have comedic chops!

Her and Ameche have lovely chemistry which they’d have to considering we see their relationship over several decades.  There’s a flashback of when Henry tries to fool Martha by posing as a bookshop employee that while not introduced well (it took me a few minutes to figure out why Martha didn’t recognize Henry all of a sudden) shows the chemistry they have.  Martha’s life could have surrounded around an arranged marriage, as Hugo so eloquently rhymes at one point that she was “bound for Arthur’s table.”  At one point Arthur tries to get Martha back by telling her of the boring, unromantic life they could live and Martha doesn’t want that.  She’d be better off an old maid…IN KANSAS!

Eventually the two are wed and have a son that is a mini-Henry in many ways (the child actors are brilliant in this film which is a feat in my book).  Henry’s lying takes on a new tone, that of trying to please his family which doesn’t always succeed.  Case in point when he tells his son Jack of his obedient upbringing to which Jack slyly replies “then Grandfather must be a terrible liar.”  The family scenes take on a bittersweet poignancy as Hugo continues to take a prominent role on the sidelines.  When Martha gets fed up with Henry’s infidelities she leaves him.  Hugo takes this harshly and tells Henry “We lost Martha” (italics are mine).  Hugo openly admits that the life Henry leads is the one Hugo dreams of.  The old man finds a second chance at life in being a part of Henry’s family and yet Henry continues to screw it up.  Considering the numerous unhappy marriages the film presents, Henry and Martha need to stay together in order to prove that love exists on this Earth. 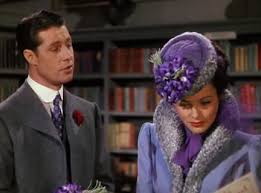 Cut to Martha’s parents the Strabel’s (played by Marjorie Maine and Eugene Pallette) who are arguing over who gets to read the comics.  It’s a hilarious sequence if only because Mr. Strable says this happens every Sunday.  We see a marriage that’s lasted far too long and if this were any other time they’d most likely be divorced, and yet they thrive on pushing each other’s buttons leaving their poor butler Jasper stuck in the middle.  We knew before that, according to Martha, they can’t agree on anything but this proves it as they only let Henry in the house because they want to bicker with each other.  Henry, in certain regards, is like the Strabel’s, especially when he tries to tell Martha he’s sorry…but he really didn’t do anything!  The fact that Martha takes him back is all on Ameche’s acting because he makes Henry so likeable even when he’s pulling pranks and being a cad.  I can’t really say “cad” because we never truly see him do anything heinous and for the most part his antics, especially towards the last half of the film, are in the best interest of his family at least according to him.

Aside from his immediate family Henry starts to lose his touch with age.  He can’t predict who his son dates, Martha doesn’t fall for his game and the showgirl Peggy Nash (Helene Reynolds) isn’t fooled for a second when he shows up in order to get her to break it off with his son.  Martha knowing about Peggy well before Henry did shows that he’s slipping faster than he expected and it also shows that one can’t control everything in their lives nor should they.  Henry ties so hard to prevent Jack from marrying a showgirl…and Jack still does!  Will they be happy?  We don’t know but it’s obvious that fate can’t be controlled by Henry Van Cleve.

Heaven Can Wait is a darling film with a happy ending.  The jumps in time are a little abrupt but the aging makeup really showcases the passage of time and does it better than the editing (making me wonder why we screw up making actors look older today).  This was Lubitsch’s only completed Technicolor film and it looks beautiful today on television.  Go see Heaven Can Wait (and I do recommend the completely different 1978 film of the same name).  Ameche and Tierney are perfect and the script is funny as Hell…literally!