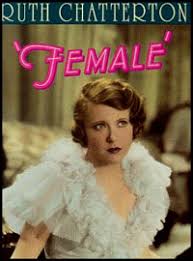 I’m reviewing all five films (and one documentary) in the Forbidden Hollywood volume two box set, below are my previous reviews:

Review of The Divorcee

Review of A Free Soul

Female is a frustrating film because it features a premise that can only end one of two ways: either cop-out and conform or die.  Literally, I thought our heroine would end up dead before she became a domesticated lady.  I mentioned in my review of A Free Soul that I wouldn’t see a film worse in this collection but I’d have to tie that film with Female.  The story is frustrating, never able to be truly racy and therefore settles for a twist that feels shallow and the acting is passable from all involved.

Alison Drake (Ruth Chatterton) is the CEO of a prominent automobile factory.  She’s tough-as-nails with a “love ’em or leave ’em” attitude she uses to seduce numerous men and break their hearts.  The problem is Alison is trying to entice an independent design engineer named Jim Thorne (George Brent) to join her company.  As her seductions fall flat Alison starts to discover she might have true feelings for Jim.

I should be happy considering this film takes a premise that’s usually seen in romantic comedies today with a male in the lead role.  How many times have you seen the guy in a rom-com fighting to get the girl whose immune to his charms?  I can rattle off several titles within the last five years so I will give Female that one pat on the back.  Like many pre-Code films our main heroine is given motivation for her actions.  She’s not just a bitch but openly feels that she should be able to treat men they way they treat women, and by that I mean seduce them and not call (I know not every man is like this but you get my point).  We saw similar sentiments expressed in The Divorcee so you should be well aware of how this film is going to end.  Trust me, she won’t be saying that come conclusion time.

I’ve never seen Ruth Chatterton in a film before and she is pretty with a cool and refined edge but that’s all she seems to have.  She’s a mish-mash of Myrna Loy and Bette Davis without the memorability.  I’d have an easier time seeing Barbara Stanwyck in this role where her speeches would have grit to them.  I don’t mean to say that Chatterton isn’t a good actress, just not particularly memorable.  The script does give her some solid speeches, as is generally the case in the opening of these films, as she berates the men who flatter her.  She’s extremely confident already so why does she need a man to tell her what she already knows?  You tell ’em sister!

With all this female empowerment of course we have to present the challenges to show she’s just a mushy woman inside.  For starters all the men Alison seduces become completely emasculated after being with her.  They bring her flowers and all expect a relationship.  I could understand maybe one man being confused by her intentions but all of them?  It appears to be common knowledge in this office what Alison’s game is so how do these men not know?  And for that matter, they’re all-powerful businessmen in their own right so one-night stands are entirely foreign to them?  Thus we meet Jim Thorne, the one man who refuses to sleep with Alison (how chivalrous!).  This indifference to her makes Alison want him more and decide she’ll do whatever she has to in order to woo him.

This brings us to George Brent who you might remember seeing in my review of Dark Victory (he also appeared in Jezebel, again with Bette Davis).  Much like Chatterton he’s good but not memorable.  I certainly wouldn’t risk my company’s future for him and that’s what the film fails to do, make him a man women would forsake life and limb for.  The only reason Alison wants him is because he refuses her making her motives shallow and akin to a petulant child wanting a toy!  To add insult to injury Alison’s man-servant Pettigrew (Ferdinand Gottschalk) tells her in order to win Jim she needs to be more feminine, hence the title.  According to Pettigrew, Thorne wants “someone who’ll look up to him.”  Yes ladies, just look up in adoration to man and he’s yours!  The sad thing is Alison completely goes with this logic.

At one point Alison says she doesn’t love Jim because she’s afraid of “spoiling things.”  It becomes obvious that the script is trying to say that Alison loves Jim, she doesn’t want to marry him which is an admirable and frank sentiment for the time.  Alison is a powerful woman, it’s not wrong that she wouldn’t want to spoil love with money and an empire and how does Jim counter this?  By saying that “women are born for” marriage and children!  Yes ladies, this man can be yours if you give up your career.  Here’s a female, telling him exactly how she feels and he counters with “tough it’s your job as a woman.”  The film isn’t shy about stating this.

The climax has Alison leaving an important meeting to have an emotional outburst (because we ladies can’t control our emotions during business hours).  She proclaims that women aren’t able to run companies and shouldn’t let it interfere with life and love.  A woman who for the first 40 minutes is a strong, level-headed woman, immediately turns into a simpering, crying girl saying work is hard when a man’s around.  And Pettigrew agrees (thanks dude, totally don’t think your name is cool anymore).  The ending has Alison and Jim living happily ever after.  Alison gives Jim the company (the right thing…sarcasm intended) and declaring she wants to have nine children.

It should be apparent how I feel about this movie but the biggest question mark is that this film never seems truly “forbidden.”  I mean Alison does enjoy one-night stands but the dialogue and setups aren’t nearly as frank as in A Free Soul or The Divorcee.  And the entire second and third half of the movie is Alison trying to woo George by being a lady which isn’t scandalous at all.  Night Nurse continues to be my favorite of the series.  On top of that the movie is boring.  It’s only 60 minutes with little momentum outside a standard romance film.  There’s no true excitement because your painfully aware that Alison and Jim will end up together.  The last film in the series is Three on a Match which will be reviewed Thursday as part of TCM’s Summer Under the Stars tribute to Warren William!