I’ve been planning on renaming my Hall of Fame for a while.  It’s not that it doesn’t accurately describe what I’m trying to do, but I wanted to personalize it to this site.  Therefore, starting this month every new entry into my Hall of Fame will now be winning a Veronica.  Ms. Lake continues to be the poster woman of all new things here so it would only make sense to enter into my Hall of Fame is to gain Veronica’s approval.  A few things: Yes, I realize Veronica herself isn’t in the Hall of Fame yet but  she will be!  And two, I don’t care if there’s supposed to be an apostrophe in that title, it’s staying (no offense but being bogged down in English papers at the moment really makes me hate punctuation).  So who will be entering the Veronica Hall of Fame this month?  Well it seems our 31 Days of Halloween put two men into the arena! 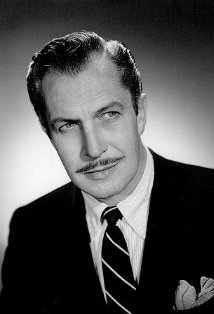 It always saddens me when I discover an actor whose work I’ve loved, and yet I haven’t put them in my Hall of Fame.  Vincent Price is one actor whose films I’ve seen since childhood and he always surprises me.  I actually have a few additional Price films I hope to review in the future.  Price gets a Veronica for his work in Edward Scissorhands, The Great Mouse Detective, The Masque of the Red Death, House on Haunted Hill, House of Wax, and Laura.  Masque of the Red Death and House on Haunted Hill have been reviewed on the site.

Karloff is another horror legend who enters into the Veronicas.  I find something haunting about Karloff and in watching two of his performances during Halloween, he creates entirely separate identities for every role; right down to mannerisms and vocal inflections.  Karloff has six films allowing him to nab a Veronica (five of which I love): How the Grinch Stole Christmas (I’ve made exceptions for television show or movies that have had significant impact on me or have entered into popular culture), Bride of Frankenstein, Frankenstein, The Black Cat, Black Sabbath, and The Mummy.  The Grinch, Bride of Frankenstein, The Black Cat, Black Sabbath and The Mummy have reviews here.

Congrats lads!  I’ve also gone back and updated links and review numbers for any actor/actress already in the Hall of Fame.  If you have an actor or actress you think of worthy of winning a Veronica comment here or in the Veronicas section.