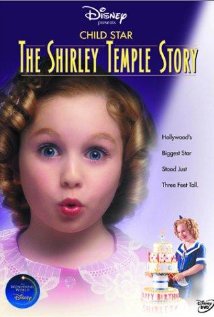 Remember when The Wonderful World of Disney aired on television?  Remember when they used to create original movies?  It was a brief, shining moment in my television viewing history, but I remember it well.  I remember watching Child Star: The Shirley Temple Story when it first aired, and being dazzled by the story of one of the most enduring child icons in the world.  I figured rewatching it now (perspective changes from the age of 13 to 24) I’d discover flaws with the plot and the acting that would make it unwatchable.  I could have been watching it through the same rose-colored glasses of my 13-year-old self, but I think The Shirley Temple Story has to be the best movie I’ve watched since I started doing Biopic Theater.  The girl playing Shirley leaves a bit to be desired, but this movie actually has good directing, and an even better screenplay, that makes it fun and informative (this is also one of the more authentic biopics).

The story of Shirley Temple (Ashley Rose Orr) is told from her time as a tiny dancer to the rise to fame at Fox Studios.  As her stardom blossoms she doesn’t lose sight of those who love her, including her mother and father (Connie Britton, Colin Friels).

I actually think Child Star is the best example of how a biopic for the small screen can be done well from pacing to the subject matter focused on.  If you’re looking for a lurid story you won’t find it here.  Temple’s life was incredibly wholesome, and aided by Disney who put out this movie you have the master’s of family entertainment coming together.  The movie is short on drama, but long on heart and family.  The script was based on Shirley Temple Black‘s autobiography Child Star, and critics have been quick to say that in order to please Black, Disney followed her version of events.  I’ve read Child Star, and the movie does hit the greatest hits of the book including the opening having Shirley’s father George getting his tonsils removed to ensure a girl being born (that’s as risqué as this movie gets, and it’s a weird way to open the movie).  The movie does have that Wonderful World of Disney sheen to it with an extended ending focused on family and believing, but it comes int the final ten minutes.

What also works in the film’s favor was Temple’s brief time as a star.  I always mention how these movies fail to give a broad overview of someone’s life in 90-120 minutes because it’s impossible to boil down 50 years of life to 120 minutes.  Sure, Temple did fantastic things after her heyday as a child star, but this film has a narrow strip of time it wants to show.  Temple’s heyday lasted from the time she was 5-12 (Fox changed her birth certificate to start her career at 4), so the movie does hit all the big films within 90 minutes although I did feel the absence of A Little Princess was wrong as it led into her bombing in The Blue Bird.  A large portion of the film has the studio heads discussing Temple’s fame, and how the public will tire of her as she ages so from the opening the audience is aware this fame will end quickly.  I did question how Temple’s family ended up broke.  I’m not quite sure how that happened according to Temple’s autobiography, but the film has Gertrude and George sitting down to finalize Shirley’s exit from Fox and discovering the trust set up for her is lower than expected.  The next scene has George telling Gertrude they’ll have to buckle down, but I never understood why?  We never see the Temple’s spending extravagantly  so how did that happen?  When the film jumps three years to Shirley as a teenager the family seems to be doing well for themselves, but never explains how.  The film focuses so much on the fame that the family drama is left by the wayside until the end leaving the audience to wonder what exactly Temple’s parents have been doing all this time other than “believing in” Shirley.

The acting and the movie recreations are great.  The movie gives a detailed look at the filming of several of Temple’s films, and in many instances recreating scenes like the Bojangles step dance from The Little Colonel.  If you’re a consummate film fan you’ll know the actors and directors Temple worked with from first or last name alone.  Because so many of the actors/directors are deceased there weren’t silly things like changing names in this film.  The movie does show Temple irritating Lionel Barrymore during filming of The Little Colonel, and her filming her first scenes in Little Miss Marker.  It’s a nitpick, but I wished they had included Temple hearing about the death of Dorothy Dell (Dell was in Little Miss Marker) as it did affect Temple during her next film.  I guess since Dell isn’t a household name it was negligible to the script.  The film does include a subplot about Temple’s love for Amelia Earhart, even meeting her in one scene.  It’s an inspiring moment, but watching Temple cry over hearing the shocking news of Earhart’s disappearance felt like an unnecessary dramatic moment, and felt canned.

The actors picked are the best for their roles, and work well within a television format. Before she was on Nashville and Friday Night Lights, Connie Britton played Shirley Temple’s mother here.  She’s great as the kind, compassionate Gertrude Temple who wants the best for her daughter and refuses to let the studio heads control her “like a chip in a poker match.”  Gertrude Temple wasn’t the typical stage mother according to Shirley, and Britton’s warmth helps in the role.  Hinton Battle is stunning as Bill “Bojangles”  Robinson.  Bojangles and Temple’s relationship is fleshed out some in this film, but Battle is a fantastic dancer and the use of full-body shots lets you see he’s doing all his own dancing.

The weak link ends up being Rose Orr as Temple herself.  The young actress isn’t terrible, again this movie is the best I’ve seen, she’s simply way too old for the part.  Rose Orr was twelve when she made this, so when Fox signs her up at the age of five you have a really hard time believing this girl is five, let alone the fake age of four!  Temple’s cherubic nature was due to her young age, here it just seems like the young actress is heavy (no offense). The only direction seemingly given to the actress to convey Temple’s personality is the vocal patterns Temple uses, but here it sounds as if Rose Orr is simply congested, and once Temple does match the same age as the actress playing her it’s hard to understand why she’s still talking in that baby voice.  Is it because the filmmakers didn’t think the audience would believe it was the same character if her voice changed?  Rose Orr can sing and dance which helps in a lot of the tap dancing sequences, although she does have a tendency to add modern runs to the songs when she’s singing.

No matter what, Child Star: The Shirley Temple Story is the champion of made-for-TV biopics at this point.  The film is historically accurate for the most part (it does assert the erroneous rumor about a Clark Gable/Jean Harlow trade for Temple to do The Wizard of Oz), and the acting from everyone is solid.  The short run time helps in preventing filler and the plot from stagnating.  I recommend watching it.