I’m currently enmeshed in the world of F. Scott Fitzgerald, and am reading Tender is the Night in anticipation (my teacher’s, not mine) of writing a paper.  So when it was announced that the newest wave of 20th Century Fox‘s manufactured-on-demand (MOD) DVDs would include this 1962 adaptation, I had to watch it for comparison’s sake.  As a movie, it’s talky, stilted, and marred by some bad casting; then again, it has an excellent performance from Jennifer Jones that makes much of the bad flake away.

Nicole and Dick Diver (Jones, Jason Robards) are a wealthy couple living it up in Italy.  When the nubile Rosemary Hoyt (Jill St. John) arrives, she threatens the tenuous stability of the Diver household when she sets her sights on Dick. 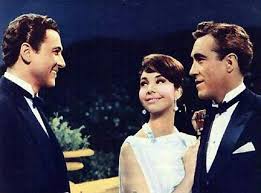 The book itself is a lengthy tome told from both Rosemary’s point of view, and a third person narrator detailing the origins of the romance between Nicole and Dick.  Due to the constraints of the medium, the subjective viewpoints have to be eliminated, and by default remove all the ambiguity and idealization inherent in the text.  Rosemary idealizes the relationship between her and Dick, and thus believes that his relationship with Nicole is flawed.  It’s after the novel shifts to explore the relationship between the Divers that the picture is complete.  This ideal quality ties into Rosemary’s innocence – she being just eighteen in the novel – and inexperience with relationships.  The stark presentation we’re given in the movie lays everything on the table, and all the characters are presented as fairly ugly.  Character complexity, such as the relationship between Rosemary and Nicole, showing how they’re two halves of the same coin, are removed as well as entire plotlines for the side characters like Abe North (Tom Ewell) and Tommy Barban (Cesare Danova).  At over two and a half hours, it’s difficult to watch as it is, but when you see how much was excised you start to wonder why the script didn’t focus on the more interesting characters.

It’s not that the characters here aren’t interesting, just soapy and melodramatic.  This is F. Scott Fitzgerald at his most stylized; I say that now, but The Great Gatsby comes out this summer, so I reserve the right to change my mind.  The movie aims to tell the audience, instead of showing things.  There’s a belief that the audience is so stupid that they have to be told “French Riviera – in the 20s” via title card.  The first half maintains its heading, and is rather determined due to the strong performances that buoy the trite melodrama.  Jennifer Jones was 43 playing a character that, in the book, is 24!  She looks absolutely stunning, and actually is prettier than the 24-year-old Jill St. John.  I found it hard to believe St. John was 21 in this when Jones looks no older than 30.  The character of Rosemary does a disservice to St. John.  The book gave Rosemary a plot wherein she found herself yearning for a fatherly protector, and here she’s simply a woman (not at all a girl) who wants to steal another woman’s husband; she’s not sympathetic in the slightest.  One scene that shows up in both formats is how Hollywoodized this is. Rosemary wants Dick to seduce her, and tells him it has “nothing to do with Nicole.”  In the book, this sounds like the declaration of a little girl who wants a cookie and believes no one will care.  With the Rosemary here she’s a cold femme fatale who doesn’t care who she steps on to get what she wants.  The character in the novel truly relies on her mother as her conscious, guardian, and messiah.  Here, St. John talks coy, with a “gee whiz” attitude about not knowing anyone other than her mother, but it’s not believable.  The screenwriter came to that realization as well because he drops the baby routine for Rosemary in the second hour.  Her character eventually disappears with zero send-off and it feels like a missed opportunity to make a strong connection between Rosemary and Nicole, and emphasizing Dick’s downfall as being in him, not the women he’s in love with.

Jones is given far more to do.  Jones had real-life trouble with mental illness, so playing the tormented, abused Nicole Diver must have dredged up painful memories.  Her character runs through the litany of anxieties, and she shifts from manic, to paranoid, to resigned in a manner of seconds, yet it never feels rushed; simply her thought processes coming through.  When Dick tells her she’s paranoid, she tiredly acquiesces  calling him “Dr. Diver” as if he’s told her this several times.  She stands in a corner and simply waits to be sent to her room.  I’m actually hoping to write my paper on the infantilization of women in the book by the men who “love” them, and this comes through greatly in Jones’ performance.  Nicole is a character constantly seeking approval, and is so afraid of losing control and letting insanity consume her.  I would go so far as to consider this an Academy Award worthy performance for detailing mental illness without going into stereotypical rages or other high-falutin’ marks of insanity Hollywood trots out to win awards.  Jones plays it with a quiet anxiety, a fear that everyone is looking at her that’s untrue.  And of course, the costumes are luminescent on her!

This is a character drama, and so astounding performances such as Jones’ elevate the material and keep the story engaging.  Tom Ewell also puts in a darkly tragic performance as Abe North.  Unfortunately, his subplot is entirely removed from the story leaving him to be the bumbling drunk who’s exasperated by tourists, and is dying to impress by creating a piano composition to wow everyone.  His character simply throws drinking glasses and gets in fights.  Similar to St. John, this performance doesn’t help him at all.  Ewell’s face is seeking approval just as much as Nicole, and yet the script has no idea what to do with him.  I also found Joan Fontaine to be delightful in the hammy role of Baby Warren, Nicole’s sister.  The movie makes no bones about Nicole’s father being a child molester (in the book it was heavily implied), and the shock and disbelief on Fontaine’s face is indicative of her feelings towards her sister.  When she propositions Dick, and wants him to marry Nicole, it’s not necessarily for love but for control and appearances sake.

The first hour is about establishing the Diver’s world, so the transition firmly into exploring Dick Diver, alone, is abrupt and makes the second half boring as all get-out.  The transition in the book didn’t focus solely on Diver, but exploring his relationships with the two women who have been there from the beginning.  Here, Dick’s deterioration causes him to act like the Incredible Hulk and simply attack everyone he meets.  He is so freaking aggressive I wouldn’t have been surprised to see him walk down the street and start gut-punching people.  His outbursts are so hilariously off-kilter I’m shocked he didn’t lash out as his children for simply saying “Hello.”  It’s that unpredictable.  In one moment he’s attacking a patient’s family member for disagreeing with his analysis, and in the next he’s throwing a drink in Rosemary’s face because she believe’s he’ll have an affair with her; in the book he does!  At the end he’s so flippant, which I figured was meant to be resignation but didn’t feel so, that his divorce doesn’t register.  He feels inconvenienced as opposed to broken.  Unfortunately, this is a dual problem of the script and actor Jason Robards.  Robards is sorely miscast as the vivacious Dick Diver.  Robards is a poor man’s Humphrey Bogart in looks and performance (probably what enticed Lauren Bacall), and that’s not how Diver is supposed to be.  The real-life couple the Divers were based on were said to embody the “shine of life,” and while I believe that of Jennifer Jones, Robards is far too dour.  His bedside manner when he’s in the doctoral setting feels uncomfortable for him, let alone the patients.

The DVD from Fox’s Cinema Archives lacks bonus material, since this is processed on-demand, so the movie is what should entice you. For fans of F. Scott Fitzgerald’s work, you’ll find little of the original source material.  The film removes the context of the character motivations, and the plot plods for far too long.  If you’re interested in seeing the movie, do so for the performances of the exemplary Jennifer Jones, Tom Ewell and Joan Fontaine!  A sumptuous film, but one that feels cold to the touch.  By the way, I appreciate Fox for putting out amazing copies of rare DVDs, just saying overall!

Tender is the Night