Los Angeles is commonly identified through several key locations: the Hollywood Sign, the Hollywood Bowl, etc.  But one principal location that is both a representation of, and a forgotten symbol of, Hollywood is the infamous Chateau Marmont Hotel.  Authors Raymond Sarlot and Fred E. Basten seek to uncover the mysteries and explore the origins of the infamous hotel, but much like the famous people who have stayed there, a lot remains on the surface.  At times deeply incisive, the book can be a taste boring with its focus on middling stars, or witty anecdotes about staff.  I’m not quite sure what I expected with the book, overall, but it felt that grittier information was remained hidden outside of the completed work.

Having never been to the Marmont in my life, I’ve only been privy to salacious gossip about the decadent goings-on within via gossip sites.  Life at the Marmont explores the foundations of the hotel, from its origins in the 1920s all the way to somewhat present day (the book is a re-release from the 1980s).  The book spends a fair amount of time discussing the early decorating attempts and the desire to create a small hotel out of open land.  From there, Life at the Marmont enacts a basic trajectory of the hotel’s establishment up until the 1940s.  After that, we get intermittent returns to the history and how L.A. society shaped the hotel, such as the riots and unrest from the 1960s-1970s culminating with hippies breaking into the hotel to steal food.  Unfortunately, the history seems secondary to anecdotal information about the various stars that stayed there.  I wanted more of a guide to the hotel, thoughts on the foundations, and more of what it felt was too boring.  I felt information could be found in proper travel guides as opposed to here, and felt an opportunity was wasted in not detailing some of the stories of haunted rooms.

At a brisk 368 pages, Sarlot and Basten spend a large amount of time detailing the people of the Marmont, both staff and celebrities.  You get stories involving big stars like Jean Harlow, who celebrated her honeymoon there, to smaller stars like Hermione Baddeley.  Your interest in these sections will depend on your interest in the stars, themselves.  As the decades roll on you get appearances from larger stars like Dustin Hoffman, Robert De Niro, and Lindsay Lohan.  Nothing is too racy though, and there are a few moments where the authors intentionally hold back a name, but it’s not overt with the intent of you being able to identify who it is.

With all the love for the celebrities, the actual hotel seems to get lost in the story.  We only hear of the hotel through the celebs who stayed there.  Yes, there are sections devoted to the employees, like the garage boys, the switchboard girls, and others, and we do chart their trajectory and why they ended up leaving; but they, too, are wrapped up around the celebrities and how they were treated. I can read the stories about the stars anywhere, I never felt like I was getting an insider’s peek at the hotel.  When the story focused on the changes within Los Angeles, and how that affected things – like a giant showgirl billboard blocking the view – it was a perfect combination of Los Angeles history affecting a Los Angeles landmark, and I wish I had been able to read more. 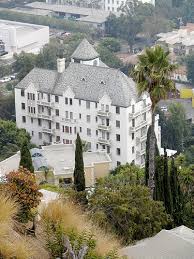 Overall, Life at the Marmont presents that, but never IN the Marmont.  The stories about the celebrities are meant to be the draw, but there’s still an aura of mystery and privacy around the hotel that prevents this from being a true tell-all (the section on John Belushi‘s death feels heavily sanitized).  It’s a quick read that should whet people’s appetites and inspire others to visit the Marmont in the future.  Life at the Marmont is available for pre-order, and will be on shelves April 30th.

Life at the Marmont: The Inside Story of Hollywood’s Legendary Hotel of the Stars–Chateau Marmont

2 thoughts on “Life at the Marmont: The Inside Story of Hollywood’s Legendary Hotel of the Stars” Leave a comment ›

Ticklish Business Life at the Marmont: The Inside Story of Hollywood’s Legendary Hotel of the Stars