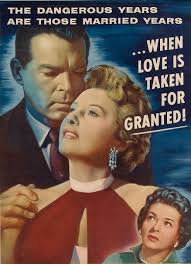 Sirkian melodrama is painted in shades of gray, which is necessary for stories that have conflicting viewpoints and/or enough complexity.  There’s Always Tomorrow should be an incisive revelation of infidelity and deterioration within the nuclear family – a popular trope of Sirk’s.  Granted the performances from the duo of Stanwyck and MacMurray are cogent, and they exhibit a potent chemistry as they have in past works, but in the interest of creating character multiplicity everyone falls into flat two-dimensions.

Toy manufacturer Clifford Groves (MacMurray) is a guest in his own house; his wife, Marion (Joan Bennett), doesn’t have time for him, and his kids only talk to him for money.  When Clifford’s old friend Norma (Stanwyck) arrives, Clifford is placed between being happy with Norma or staying with his family.

The scenario Sirk works with in There’s Always Tomorrow operates within the soap operatic family melodrama, while exploring the role of masculinity within the 1950s nuclear family.  Commonly analyzed from a female’s perspective the 1950s showed “quiet lives of desperation.”  I can’t immediately recall a serious inquiry into masculinity during this time period.  Sirk’s script doesn’t do much outside of showing that for all their bread-winning, men are relegated to being the bank.  Clifford comes home and his children are jerks and his wife isn’t able to spend any time alone with him because of the children.  However, instead of taking a harsh look at the various dynamics within the family: Marion’s mollycoddling, the fact that the children are spoiled brats – the movie simply says “Don’t have children if you want to keep your marriage hot.”

You can tell Sirk wants to be taken seriously as his usual gimmicks are in short supply here.  He isn’t able to blind the audience with the gaudy Technicolor he’s known for, so the message and performances have to be taken at face value.  The script is imperfect, but the effort in which he wants to flesh out the family dynamics are admirable.  The adults all have outside reasons for acting they way they do; Marion isn’t villainous, she’s doing what women have been taught to do during this period which is raise children.  It’s a moment where Sirk says a lot with a little.  Women have been told to maintain house and home, husband and children, yet they’re never taught how to balance the two.  Clifford may be the main character who you sympathize with, but you come to understand that Marion doesn’t know any other way to act.  Unfortunately, the movie keeps her in the dark about all the machinations going on between Clifford, Norma, and the kids, but if this was a darker film I could easily envision Marion turning a blind eye to Clifford’s infidelity.  Since this is Clifford’s story, Marion does come off a bit dense.  When Clifford pours his heart out to his wife, hoping to spark something to fix their marriage, Marion is unable (or uninterested) to truly understand Clifford’s problem (another issue of masculinity: pouring out your feelings and being rebuffed); she says she understands, but blows him off and never does anything.  The script believes it’s smart in exploring what makes a marriage tick, but events are one-sided.

An interesting element of There’s Always Tomorrow is for those who have been in similar situations; whether as a child of divorce by infidelity, or a partner.  The script wants to place the audience in a situation where they have to sympathize with those who would be in the wrong: Norma and Clifford.  I didn’t want to like either, because I’ve watched my parents go through a similar situation – although one not nearly as innocent as this film – and while the issues didn’t match up completely, I was forced to re-evaluate.  The problem is you have to to root for Clifford and Norma because Clifford’s family is horrific.  The children, played by Judy Nugent and William Reynolds are despicable busybodies who believe they’re helping but forward the plot by making things worse.  It’s their miscommunication that results in finding out that Norma and Clifford are together.  A confusing aside: Despite being Clifford’s story, we never get his thoughts on what his relationship with Norma actually is going to be.  They get together, but we never hear from him whether he intends to cheat or not; it is for this reason that the kids are left to stumble on the relationship and propel what amounts to a rumor!  Neither child is a good actor, so when they “confront” Norma – a woman they’ve assumed is a homewrecker – what should be a heart-to-heart ends up being a series of yells and the young girl scream-crying “Don’t take my Daddy away!”  The problem is we never really believe whether the children appreciate their dad because they miss the money or him.

Actually, that’s the lingering issue with There’s Always Tomorrow: Does Clifford return to his home because he loves them, or because Norma leaves him?  It’s a fundamental question that’s either too big for the script to handle, or the script doesn’t want to touch it.  We’re meant to follow Clifford starting with his supposed fairy-tale life (“Once upon a time in sunny California…”) and from there we’re meant to see events through Clifford’s eyes.  When Norma first arrives, the rain stops and Clifford’s repressed sexual vigor returns.  You can’t beat a MacMurray/Stanwyck pairing.  Having done several movies prior to this, they have an easygoing chemistry; Norma is wistful when she recounts their days and when they’re alone you believe “Tonight…for a little while…time stood still.”  Really, if Sirk wanted to hit the audience, he should have stuck to showing these two question their affair.  Norma is not a homewrecker, no matter what Stanwyck’s persona is, which just makes you hate the kids more when they maliciously attack her.  She’s a woman who is well aware of how her relationship with Clifford would look to dumb kids and thus negates all the innuendo by asking Clifford to bring his wife (which he refuses to do).  They, and the audience, understand they should be together, but Norma realizes that’ll never work out.  I just wish events weren’t dampened by the presence of the kids, leaving the audience to question whether Norma took action and left of her own accord (as an adult) or if she was run out of town by meddling kids.

There’s Always Tomorrow is a decent Douglas Sirk film, but it’s potential is misused; by moving away from the couple and into the reasons why Clifford would decide to stray (i.e. children who are meddling and a wife who fails to understand) the script doesn’t give the serious situation the due it needs.  The performances by Stanwyck and MacMurray make it worth a watch.