Another month of excellent TCM programming as we hit summer’s halfway point.  While there’s no TCM Trio this month, I do have a special documentary choice as well as adding in some pertain information you might want to schedule into your day.  Let’s look at what films you should be getting lost with this month!

All times listed are Pacific, and the schedule can change at the discretion of TCM.

I had no idea that a movie had been made about the Bronte sisters – my favorite authors – so I have to kick-start the month with Devotion.  The sisters, and their brother (played by star of the month, Paul Henreid) struggle to achieve their dreams while finding love, so I’m sure this will become a weepy melodrama.  The cast itself looks fantastic including Ida Lupino and Olivia De Havilland.  This might lack authenticity, but any chance to watch a filmed interpretation of the Bronte sisters lives is worth a look.  Devotion airs July 2nd at 7pm.

I’m not a Glenn Ford fan; I confuse him with Joseph Cotten.  However, The Courtship of Eddie’s Father sounds like an adorable film about a matchmaking son hoping to secure his father a wife.  I know it became a television show in the late 1960s, and it does star Shirley Jones, adding to the cute factor.  The premise sounds fun, and after watching TCM’s offerings on Father’s Day I’m interested in watching some more fatherly films.  The Courtship of Eddie’s Father airs July 3rd at 1:15am.  (Remember, TCM doesn’t roll over to a new day till 6am the next day, so technically this is 1:15am on July 4th.)

I haven’t been as consistent in checking out TCM’s slate of late-night horror films, but I always enjoy finding one to add here.  I went back and forth on which movie to choose and discovered that Children of the Damned is a sequel to the 1960s British horror film Village of the Damned.  I covered that film during Halloween and enjoyed it (the remake less so), so this might be a worth watch.  The sequel appears to be a continuation of events in the first movie, focusing on children with advanced intelligence.  The original was a campy, 1960s romp and I expect more of the same.  Children of the Damned airs July 6th at 12:45am (technically 12:45am on July 7th).

The star of the month may be Paul Henreid, but Glenn Ford appears to be the star of my TCM Top Twelve.  The Big Heat is oft-considered one of the premiere examples of film noir (and has a fantastic poster).  The film follows a police officer teaming up with a gangster’s moll to take down a group of mafiosos.  Other than Ford the movie includes Gloria Grahame, who stood-out in Crossfire; I’m interested in watching her as a secondary lead entrenched in the mob lifestyle.  You can watch The Big Heat on July 9th at 6:15am.

The Reckless Moment appealed to me because it looks as if its combining a film noir with a mother/daughter race-against-time plotline.  Joan Bennett plays a mother whose daughter is being blackmailed by none other than James Mason!  That duo alone sounds fantastic.  It’s also directed by acclaimed director Max Ophuls whose Earrings of Madame De…was somewhat similar (although it’s been awhile since I watched that particular film).  TCM host and all-around god, Robert Osborne will be devoting July 10th to his personal picks, of which The Reckless Moment is one; it’ll air at 5pm. 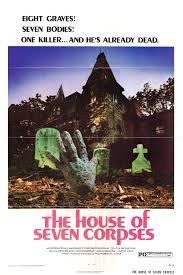 Okay, so another horror movie made the list (and if memory serves an additional one is slated), and seriously, how could you not add a movie with that title.  The House of Seven Corpses follows a director filming a horror movie in a haunted house, but the tagline to the poster involves ghostly murder.  Either way, it sounds like a spooky good time and includes one-time Howard Hughes paramour, Faith Domergue (whose movies I have taped, but not yet watched).   The House of Seven Corpses airs July 13th at 11pm.

I picked The Light Touch after reading the Pier Angeli biopic because I wanted to highlight some of her American work.  The film is a heist thriller involving art thieves, and if it’s got George Sanders in it, you know double crossings will be happening.  I’m interested in seeing Angeli in an American film, as well as gaining a broader understanding her acting experience.  The Light Touch airs July 15th at 4:30am.

I’m cheating a bit because I’ve already watched The Manchurian Candidate; I’m picking it because it’s been several years and I really want to watch it again (so sue me!).  The Manchurian Candidate follows a soldier (Frank Sinatra) intent on exposing a government group that might have brainwashed him and a fellow soldier (Laurence Harvey).  If you need more of a refresher, they remade it with Denzel Washington and no, I haven’t watched that one.  This version has a phenomenal cast including Angela Lansbury at her villainous best and Janet Leigh.  The Manchurian Candidate airs as part of guest programmer Frank Rich’s evening of films, July 18th at 6:45pm. No, it’s not the classic Universal version, but the 1950s Peter  Cushing/Christopher Lee version.  This was another pick inspired by a recent book, in this case the Peter Cushing biography.  I’ve watched snippets of his work, but have never fully immersed myself in the Hammer world.  The biography mentioned the high caliber of quality that The Mummy possesses, and it might be a fun way to spend the day.  The Mummy airs July 20th at 9am.

Between Two Worlds has one of the best – and unsettling – synopsis’ I’ve read: “Passengers on a luxury liner realize they are en route to the afterlife.”  I’m fascinated by stories of near-death experiences and Hollywood doesn’t focus on the afterlife in a way that’s not comedic (the Topper series or Blithe Spirit being prime examples).  What would a group of people, who might feel differently about dying, do when facing their own mortality?  Between Two Worlds airs during a night focused on Paul Henreid; July 23rd at 7pm. My final selection is the Alfred Hitchcock film, Foreign Correspondent.  This is considered one of Hitchcock’s best tales of espionage, and I fond of Joel McCrea – although I’ve never seen him in a dramatic film.  Really, there’s not much to say beyond the fact that it’s Hitchcock, a must-see, and a great way to round out the month.  You can catch Foreign Correspondent on July 24th at 4:45am.

Other TCM Highlights for July

That’s what’s on TCM this month.  See you in August!