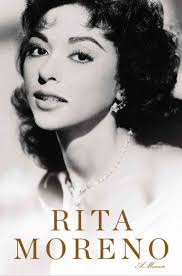 Actress Rita Moreno has solidified her spot in the pantheon of Hollywood heavy-hitters, despite her small list of film credits; as the first Latin actress to win an Academy Award, Moreno certainly can’t deny that Hollywood took notice her, regardless of their tendency to place her in sub par “spitfire” or Indian maiden roles.  Moreno’s story is a tale of ethnic stereotyping and the fact that the industry hasn’t moved far into being a place of ethnic equality.  Unfortunately, Moreno’s memoir fails to provide any insights other than cursory talk about her Hollywood career; really, it seems that Moreno isn’t interested in detailing Hollywood at all, but chooses to focus on her family and child which aren’t particularly fascinating subjects to read about for over 200 pages.  It’s an interesting glance at an actress finding her identity, but its repetitive nature and analysis of a rather humdrum existence (according to Moreno) leaves a lot to be desired.

The predominant focus within Moreno’s biography is her Puerto Rican upbringing and its influence on her life, both personally and professionally.  There’s a similar mystery about Moreno’s life and background (including a younger brother she never met after leaving him behind as a child) as Sachi Parker’s bio, but it doesn’t go anywhere.  I’m tempted to recommend Moreno start writing fiction because she has a lyrical grasp and passion for description that comes through in her early descriptions of the beauty of Puerto Rico.  Her experience hits all the buttons of the typical immigrant experience, but Moreno infuses and utilizes all the senses to provide an expansive view of her childhood.  From there she breezes through the basic highlights of her career with chapters that run between five and ten pages.  Unfortunately, this leaves little room for elaboration, and those fans expecting intense looks at her film roles in Singin’ in the Rain or West Side Story will have to be content with a chapter a piece.  It feels, at times, that Moreno isn’t interested in her acting career anymore (although she does go into her later work, including a stint on HBO’s Oz).  While I would never begrudge someone for finding their marriage and children to be the pinnacle of their life, it doesn’t make for compelling reading.

The longest chapters focus on Moreno’s family; her daughter and husband, Lenny Gordon.  Their marriage was fraught with problems (that are discussed in an adult, grown-up manner although Moreno seems to make excuses for her husband in a few places), but a touching chapter discussing Gordon’s final illness and death emphasizes their true love for one another.  The only other major lover given any significant space in the book is Marlon Brando, and even then you feel as if Moreno is holding back a lot.  She details elements of their relationship with a very offhand manner until his death.  It becomes hard to believe that she was the love of his life – as she claims others told her – when their relationship is mentioned in such vague terms.  She doesn’t go into enough detail on their romance or their fights, content to describe everything in flowery and nondescript terms, that it’s hard to get a bead on their relationship at all; it’s a feeling that continues throughout the entire book.

I also found myself frustrated at the oversight on fact-checking.  Fact-checking in memoirs tends to be unimportant nowadays since you’re taking the author’s word for it, but the discrepancies here are silly.  Darryl Zanuck is mentioned as being the head of Universal (he was at 20th Century Fox); Gene Tierney is spelled Jean Tierney.  These are oversights that can make this boring book utterly frustrating.

Unfortunately, Rita Moreno: A Memoir is interesting to Rita Morena and not necessarily the audience at large.  I hate to say that because autobiographies that aren’t ghostwritten are becoming scarce.  However, Moreno comes off as cagey and detached from her Hollywood career.  She hits the high points out of necessity, but devotes a lot to her early childhood and her later life with little in-between.  She’s a beautiful writer, and I recommend her work as a testament to her future in writing, but there’s little of interest to hold your attention.

3 thoughts on “Rita Moreno: A Memoir” Leave a comment ›