My expectations were mild about Night and Day, the “fictionalized” Cole Porter biopic that rounds out our Cary Grant week.  Hollywood biopics, particularly during this time period, were well-known for being almost complete fabrications and this is no different.  If anything, Night and Day has less of a story than past biopics, and is a glorified sequence of music videos for two-hours.  Grant and Alexis Smith are decent as Cole and Linda Porter, but everything is set up within the first forty-five minutes leaving them to cling desperately to the strings of a defunct plot.

Cole Porter (Grant) is a Yale law student who discovers a love for songwriting.  As he works his way up the ladder to Broadway fame he meets the beautiful Linda (Smith) who changes his life.

Cole Porter was a songwriter who wrote countless songs we all know…and he had a wife named Linda; that’s all that’s unearthed in this two-hour, Michael Curtiz directed biopic.  Oh, and Porter had a bum leg that he sustained in a horse-riding accident.  Sadly, the biopic wears its intentions on its sleeve: it’s a chance to put Grant in a colorized musical playing one of the greatest composers of all time.  It’s Oscar bait, pure and simple.  Unfortunately, it’s neither compelling nor engaging Oscar bait.  The first forty-five minutes establish Porter as a dissatisfied Yale law student – to say it’s hard to buy the 42-year-old Grant as a law student is the understatement of the year; we also meet his professor, played by Monty Woolley…playing himself?  I was never completely understanding of why Woolley is in the film at all, let alone playing a character named after himself.  Was he friends with Porter?  I’m assuming so.  Aside from the gimmick alone Woolley’s character doesn’t do much other than pop-up from time to time.

After Porter gives up on law school he quickly meets Linda.  Due to the Production Code there could be zero mention of Porter’s open homosexuality, so the relationship between Porter in the film and Linda is that of an enduring romance for the ages.  Unfortunately, you never feel that because they meet, exchange pleasantries, and a few scenes later they’re in a love that will supposedly last a lifetime.  For a relationship with such depth, romance, and emotion there’s none presented.  Sure, there’s an occasional sequence where Linda tells Cole he’s obsessed with his work and they don’t spend time together, but after that Linda disappears until the climax.  Smith is gorgeous, but she serves up nothing other than a pretty face.  I wanted something to spotlight her as more than “the wife,” and there’s absolutely nothing.  It’s sad to hear Cole mention to Linda that “you’re around at the most important times in my life.”  That line sums up her place in the story perfectly!  She arrives during important moments to bring necessary emotion and strength the supposed bond between the couple, but that’s it. 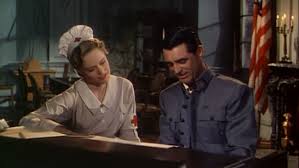 The plot is set-up and forgotten by the first hour, leaving you to wonder what the second hour could be about.  Realizing this the film turns into a musical without any narrative device.  The loose idea is you’re watching Porter’s various plays, but there’s little context on any of them, and even when there is you’re watching Porter jot down musical numbers that are performed by his consummate leading lady, Carole Hill (Ginny Sims).  The introduction to World War I is the longest bit of running plot, but apparently all Porter did during this time was compose “Begin the Beguine.”  If you enjoy colorful singing and dancing then you’ll enjoy the second hour of Night and Day.  Porter’s songs are classic for a reason, and it’s lovely to hear Grant (briefly), Jane Wyman, and Eve Arden stretch their vocal muscles.  Arden herself takes a small role as a French singer named Gabrielle, and turns in a hilarious cameo performance that had me begging to follow her around.  The musical numbers are all staged nicely, but they all resemble the “Beautiful Girls” dance number in Singin’ in the Rain; it’s lovely to look at, and has a bare modicum of connection to the plot but it’s pointless otherwise.

Sadly, Night and Day is an empty biopic that squanders the excellent potential of Grant.  It’s impossible to make Grant a boring, lifeless presence but this film succeeds in doing so.  It’s worth a look only for Grant completists.

NEXT WEEK: Monday kicks off our next member of the July Five as we explore the work of Marlene Dietrich.