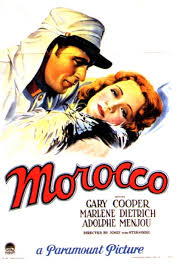 Marlene Dietrich is the woman of the hour for this week’s July Five installment, and we kick things off with her American film début.  Morocco is best remembered for Dietrich’s immortal performance, in a top hat and tails, sharing a sultry kiss with another woman.  The controversy, as well as Dietrich’s performance is a fitting summation of Morocco as a whole; without Dietrich’s sizzle the movie would be severely undercooked.  Gary Cooper and Adolphe Menjou are decent in their performances, but Dietrich overshadows both men so completely to the point of eclipsing them, and the picture, entirely.

Mademoiselle Amy Jolly (Dietrich) is the newest cabaret singer performing in a small nightclub in Morocco.  When she meets Legionnaire Tom Brown (Gary Cooper), she falls in love despite her reservations.  The two have a clash of personalities, but when wealthy Monsieur La Bessiere (Adolphe Menjou) declares his intentions to Amy, she must decide where her heart truly lies.

Morocco was the US début of director Josef von Sternberg, who had garnered immense acclaim with his foreign films with leading lady, Marlene Dietrich.  Morocco would bring both director and star into the warm embrace of Hollywood, but the finished product is all about Dietrich.  Von Sternberg is competent behind the camera, but there aren’t any feats of directorial excellence.  The camera is content to linger on Dietrich’s face throughout the movie, whereas the desert sequences have the camera sitting still.  The pacing is deliberate, and by that I mean slow to a creep in several instances.  I was never outright bored, but at an hour and a half, there’s not much going on.  Part of this can be attributed to Dietrich’s magnetism, but another is the script leanness leaves little story.  The plot is a love triangle with no sense of tension.  La Bessiere isn’t a terrible man – he agrees to take Amy to the hospital to see if Tom is okay – nor is there a true sense of danger for Tom.  By the end, I was left to draw a blank; I didn’t hate it because Dietrich is fantastic, but I didn’t love it because there’s nothing excellent besides Dietrich.

Make no mistake, Dietrich’s character is complex and well-written.  The movie understands the goldmine of talent the woman possesses and it can’t be faulted for sticking with what works.  My past experience with Marlene Dietrich has been limited to her phenomenal role in Witness for the Prosecution, but she is sinfully decadent as Amy Jolly.  Her entrance is infused with subtlety and mystery; a character eloquently and beautifully intones she’s a “suicide passenger” who purchases a “one-way ticket.  They never return.”  I assumed it foreshadowed future events, and it does to a point although never-ending at the obvious conclusion.  Dietrich exudes a sexuality appealing to all genders.  Her androgynous nightclub act – in the infamous top hat and men’s suit – puts a sharp eye on the taboo inherent within eroticism.  The various patrons of the club, particularly men, are compelled to touch Amy, as if giving in to their own forbidden attractions and desires.  Amy, for her part, flirts with all the members of the club, culminating in a stolen kiss with a female club-goer shocking to the delicate sensibilities of the Hays Office at the time.  Despite its scandalous intent, the audience – both at home and in the film – applaud it.  You understand that during this time of war nothing is off-limits; men are dying in the sand, and should be able to indulge in whatever they want.  Of course, the audience must be reminded that Dietrich is all-woman and immediately afterward we get a voyeuristic peek backstage as Dietrich stands in a form-fitting girdle.

The relationship between Amy Jolly and Tom Brown is meager in its presentation.  Tom is a womanizer who needs to have the upper-hand in the relationship; Amy refuses to be commanded by any man (as evidenced in the opening when she asserts that she doesn’t require any assistance with her bags).  Tom himself believes in the power of female adoration.  When he walks into the city with his regiment the women gaze at him with worship in their eyes.  As all the people in the market start to pray, Tom sees women praying for him through their gaze!  Tom is a man who believes he’s God’s gift and he’s in for a shock when he commands Amy to sit down only to be told no.  Amy understands Tom exactly: “You don’t think much of women” and that belief never changes.  Unfortunately, Tom has bitten of the forbidden fruit (suggested by the apple Amy presents him during her routine) and must have her for himself.  I did desire a push-pull relationship between Tom and Amy.  Amy knows that Tom is a misogynist and yet she quickly falls for him despite us seeing her independence.  It’s hard to ascertain why a woman with such nerve would up and fall for a man who believes he’s superior to her.  Adolphe Menjou’s character is no better, although he is a more pleasing male for Amy.  He, too, desires control of Amy and sees her as possessing something of value; she has worth and when La Bessiere buys her jewelery, it’s to compliment her perceived class.  In contrast to that is La Bessiere’s personality, which is pleasing compared to Tom.  The aforementioned taking of Amy to the hospital notwithstanding, he wants to take care of her instead of control her.  Again, neither man is perfect and for a woman such as Amy she should tell both to piss off, but I’d have better  understood her logic if she ended up with Menjou as opposed to Cooper.

For learning her lines phonetically, Dietrich doesn’t have to search for the right emotion nor is her dialogue stilted as if she’s struggling to wrap her mouth around foreign words.  She’s the one character in the movie with beautiful dialogue; I don’t particularly understand why, but her line “I seem to have the unhappy faculty to cause trouble wherever I go” is a perfect encapsulation of why she’s a fantastic actress.  Morocco, on its own merits, satisfies in the short-term; it is through Dietrich’s depiction of Amy Jolly that it becomes unforgettable.  Unfortunately, the rest of the movie plays at a loss because Dietrich shines so brightly.  Adolphe Menjou is solid and continues to be an enchanting presence in the films I’ve seen him; Gary Cooper is okay, but appears out of his depth (and unworthy overall) against Dietrich.  Morocco is Dietrich’s film and a fine start to understanding why the woman defined mystery and sex.