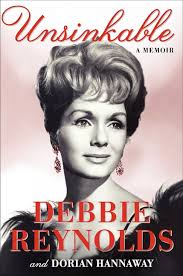 Unsinkable is a makeshift sequel to Debbie Reynolds first biography, My Life which covered events up until her second marriage.  In this installment, Reynolds examines her third, and last, marriage as well as her film career and dogged attempts to open a motion picture museum to house her extensive collection.  Reynolds keeps things light and her pithy tone gives off the feeling that you’re listening to her during one of her many roadshows.  Focused squarely on her domestic issues – with a lengthy filmography with additional commentary in the back of the book – Unsinkable is by no means a Hollywood tell-all, but a tell-of by a woman who has epitomized sweetness and purity within the harsh world of stardom.

The world of Debbie Reynolds is fraught with heartache and sadness, and yet you wouldn’t know any of it because Reynolds takes it all in stride.  Unsinkable details the issues within her third marriage, to compulsive gambler Richard Hamlett as well as the problems with Reynolds’ extensive film collection.  Reynolds was one of the foremost collectors of Hollywood memorabilia.  I remember being surprised at hearing she owned the original, Arabian-based ruby slippers from The Wizard of Oz.  The actress was intent on opening a museum of some type to house her collection and share it with fans, and Unsinkable follows Reynolds as she opens a casino (which unfortunately closed due to the scheming of her husband), and then goes from place to place begging for a home for her collection only to be forced to sell it in bankruptcy.  The main feeling I had reading Reynolds tome was shame and regret; shame especially considering how many big names Reynolds peddled her collection to, all of whom turned her down.

The biggest takeaway Reynolds spotlights is that for all of Hollywood’s talk of keeping to its roots, they have no desire to preserve history.  When Reynolds is finally forced to part with her collection, including Marilyn Monroe’s Seven Year Itch dress (which pulled in the largest price for a piece of movie memorabilia), it’s frustrating that audiences won’t be able to see that.  Reynolds is a saint for keeping what she did, especially when many told her to throw it all away, but what is Hollywood thinking by letting all that slip through its fingers?

The book is divided into two parts, and the first part comprises Reynolds’ life outside the film industry.  She spotlights her casino, the various routes she took to found a museum, and brief snippets on her children.  There’s nary a word breathed about her actual work in Hollywood until part two, and even then it’s doesn’t have the depth it should.  If you’re looking for more on Reynolds’ Hollywood career you’ll probably find it in her earlier biography (which I haven’t read, so please correct me if that’s not true).  In part two, Reynolds briefly analyzes her early film career, and provides short commentary on every film she’s created ranging from funny stories to her experiences with the cast.  (I was sad that she didn’t mention the Halloweentown series because that’s where I first saw her.)  Each movie gets two pages max and a few paragraphs minimum.  There are a few fun stories (and Reynolds isn’t shy about commenting on a few male celebrities with prominent…appendages), but nothing too gaudy or revelatory. Unsinkable is a breezy read that tells a heartbreaking story.  It is through the grace and sheer optimism of Reynolds that the book reads as light as it does despite the dark subject matter and personal struggles of Reynolds.  It’s not a book that will change the face of Hollywood, but if you’re interested in hearing about what Reynolds has been up to the last twenty or so years, it’s worth picking up.

One thought on “Unsinkable: A Memoir” Leave a comment ›