Our final Myrna Loy and William Powell film of the week, and the conclusion of The July Five itself!  Love Crazy is the tenth pairing between the screen duo, as well as a reteaming with director Jack Conway who directed them in Libeled Lady which makes sense considering Love Crazy is a knock-off Libeled Lady with Loy and Powell separated and forced to reunite through wacky hijinks (there’s also the addition of another lady seeking Powell’s affections).  It’s unsatisfying compared to Libeled Lady, or even I Love You Again, but there’s enough whimsy and Powell in drag to keep your attention.

Steve and Susan Ireland (Powell and Loy) are a loving couple celebrating their fourth anniversary.  Through a series of hijinks their anniversary is ruined and the couple ends up splitting.  In order to get Susan back, Steve feigns a mental breakdown.

Love Crazy is an appropriate title because Powell and Loy are at the heights of romance as Steve and Susan.  A running gag throughout is friends surprise at hearing that Susan and Steve have been together for four years and are still insane with love; they still dance around the room for crying out loud!  Their relationship is one to aspire to, and the cynical nature of the Ireland neighbors (and Susan’s mother) creates a cadre of villains the couple overcome.  Entering double digits in their filmography together, Loy and Powell are so comfortable with each other that when one moves the other understands.  The climax of the film involves Susan giving Steve hand signals; the humor isn’t derived from Steve attempting to understand what she’s saying because he knows what she’s saying and is working accordingly.  I can’t think of another screen pairing where the two are so in-sync.

Made up of a wacky series of comic pratfalls and miscommunications stemming from the reemergence of Steve’s old girlfriend, Isobel (Gail Patrick),  Loy ends up meeting neighbor Ward Willoughby (Jack Carson), and believes Ward is Isobel’s husband.  Add a dash of mental insanity, mistaken identity, and Powell ripping a page out of the Mrs. Doubtfire playbook, playing his own sister in drag, and you have Love Crazy.  The movie is always moving and entertaining, but I almost wished it would slow down and focus on the relationship of our couple.  Instead, the movie is forced to come up with contrivances where the couple can’t talk to each other.  The script, written by William Ludwig, Charles Lederer, and David Hertz feels as if three separate people wrote it, for the sheer amount of hijinks that keep going, and going, and going. 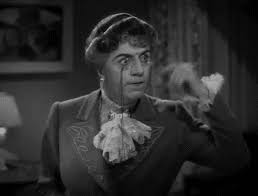 The cast, though, are able to grab the plot and run with it in 99 minutes.  Powell should have played crazy more often because he’s funny, but also maintains that cool and elegant edge.  The prior events of the movie end up bolstering his insanity defense, and Steve’s frustration at being deemed crazy provides an ironic twist.  When he plays his sister Powell is a decent looking woman, although it’s weird to see him sans mustache!  Loy is sweet albeit playing the whiny woman who downright refuses to believe Steve’s relationship with Isobel is innocent.  It’s a role better suited to someone like Jean Arthur as opposed to Loy.  Loy is better as a straight man or a drunken companion to Powell.  Loy’s scene-stealing moment comes next to screwball mainstay Gail Patrick.

Patrick is always a pleasant surprise in films, but she’s usually relegated to playing a cold, calculating femme fatale.  In Love Crazy, she is neither although she is villainous for her uninterested (or uncaring) feelings to Steve’s relationship with Susan; part of it stems from her disbelief that he’s still in love with Susan, but the script still has to force her into a quasi-villain role.  I would have enjoyed further development on her relationship with Steve, especially when Susan refers to Isobel as “the girl who gave you a black eye when you told her you were going to marry me.”  Apparently, Isobel is a scrapper and I wanted that on display!  We do get a brief argument between Isobel and Susan that had me yearning to watch an elegant fistfight between Myrna Loy and Gail Patrick.  There’s also a line with regards to Isobel that made me wonder if it was a Thin Man joke; Steve asks her “Whatever happened to that wirehair [dog] I gave you?”  Would that be an Asta reference?  You also have a quick cameo from Elisha Cook, Jr. as the elevator operator.

Love Crazy is a fine movie to end Myrna Loy/William Powell week, although I Love You Again was the best.  Love Crazy is a bit scattered with all the insanity that’s introduced, but Loy and Powell have never appeared more in love.  You also have Gail Patrick is a non-villain role worth watching.  Just don’t become too shocked to see Powell without his mustache.