Twilight Time always surprises me without fail.  Films I expect to dislike, as they’re entirely out of my wheelhouse, always have something redeeming.  In a way, Twilight Time’s last release that I reviewed (the disarmingly enjoyable Hard Times) acts as a companion to their latest release, The Driver.  Both films feature the dark (and sort of glitzy) underbelly going on within their locales; in Hard Times it was the Depression, while The Driver is set in Los Angeles.  Both take a man of few words and transform them into an ocean of emotions, especially here since the lead is Ryan O’Neal.  With high-octane racing sequences that had to have inspired last year’s Drive (I’ll get that film in a second). The Driver is worth a purchase for fans of neo-noir or badass car chases.

The Driver (O’Neal) is a wheelman for hire being chased by an obsessive cop known only as The Detective (Bruce Dern).  Knowing that The Detective has set him up, The Driver joins up with a mysterious woman (Isabelle Adjani) to pull one over on the man with a badge.

Everything about The Driver is lean, from the plot to the runtime.  At a crisp hour and twenty-nine minutes, the lack of character development or interaction could be seen as detrimental when it’s not.  There isn’t a complex plot requiring exposition, and the characters are all interested in their own personal motivations which makes relationships unbelievable in the world created.  There is an original opening sequence, included as a bonus feature on the Blu-ray, that tries to establish character development but it feels unnecessary and easy to remove.  Director Walter Hill is an economic director, and The Driver and Hard Times allow the relationships to develop organically and free of extemporaneous dialogue.  All you need to understand is that each character is motivated by obsession and personal desire: The Driver’s for money and eventually a type of revenge, and The Detective’s for a type of justice he believes is eluding him.

The cat and mouse elements between The Driver and The Detective is one piece of the neo-noir that Hill constructs.  Bruce Dern is great in a role that’s Ahab-esque.  The Detective is hell-bent on capturing The Driver because “he’s the cowboy that can’t be caught.”  A telling line of dialogue highlights his obsession: “We’re catching someone that’s never been caught…we’re doing a public service.”  Righteousness is a dangerous thing when abused, and The Detective is so certain in the belief he’s right that he becomes the cowboy who bends the laws to his whim by setting up a bank robbery for The Driver to get wrapped up in.  By the end, the lines between good and evil are blurred with The Detective throwing away his morality to catch the one whale that can’t be caught.  You start to wonder whether he knows who the heroes and villains are anymore. 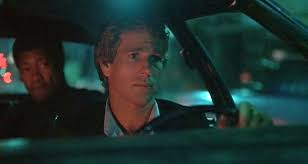 Dern has a rapport with O’Neal’s Driver, although it’s of the hostile variety.  He has no qualms with provoking The Driver, and actually appears to enjoy it.  I was skeptical of Ryan O’Neal as “serious action hero” considering his past roles in films like Love Story; however, I was surprised by him.  His blank gaze and pretty-boy looks create a blank canvas where you never truly know what he’s thinking.  You are aware of the fearlessness in his character.  The various car chases are intense and frightening, yet Driver never bats an eye; even when he’s playing chicken with two cop cars.  If you’re reading this and think it sounds familiar, it is.  2011’s Drive has to have been inspired by this, or is a blatant copycat.  The character of The Driver is an exact replica of Ryan Gosling‘s character, right down to lacking a name.  The opening car chase also looks the same in both films.  It isn’t a slight against either movie, both are great, but the comparisons are striking if you’ve watched both.

The car chases are masterpieces of cinema, up against those in Bullitt (trivia: Steve McQueen was offered the role of The Driver).  The first chase sequence is frightening and slick but the best is when Driver is showing his skills to potential clients.  The entire scene takes place in a claustrophobic parking garage with large pillars every few feet.  As Driver slides, skids, and breaks the speed limit you’re gripping yourself; a crash isn’t a possibility, it’s an inevitability.  The claustrophobic nature of it all, and the coolness of Driver at the steering wheel clashes to leave you distraught by the end.  It’s enough to make you weep for all the beautiful vintage cars that had to die in this film.

The Driver is a sleek neo-noir in every possible way.  The various characters take in the noir language; a secret code with cool lines and even cooler facades.  The femme fatales, played by Adjani and Ronee Blakely are spellbinding; Blakely in particular whose death sequence is unexpected and upsetting because of the expectation of it all.  For the briefest of moments you expect her to make it out, which makes that one breath you take all the sadder because of how untrue the situation is.  Hill also shows off his love for the genre in his shot compositions.  A beautiful shot of Adjani bathed in green light would look perfect in a colorized noir of the golden era.

As for the Blu-ray, the picture is spectacular and while the sound can get pretty loud it isn’t ear shattering.  As for bonus content, there’s the typical isolated score and the previously mentioned alternate opening which is worth a casual watch.  The included booklet with another fun essay by Julie Kirgo feels really short, but has a laidback delivery as it recounts various trivia and thoughts on the film.  The Driver is a fun movie with fantastic car chases and a tough noir sensibility; it’s also another homerun for Twilight Time.