“I do declare…” that Jezebel is a darker, sexually potent version of Gone With the Wind…and enjoyable to boot (you all should know of my disdain for Gone With the Wind by now).  The conflicted tale of a stubborn woman is frustrating at times because Davis’ character can’t exist in the real world and thus has to vacillate between being sympathetic and horrific, but I was able to push that all aside.  Fraught with sexual innuendo, and burning performances from Henry Fonda and George Brent, Jezebel is the antebellum South story to see (and how fortuitous that it’s on TCM today as part of Bette Davis day!).

Julie Marsden (Davis) is a spoiled Southern belle who enjoys toying with the affections of banker Preston Dillard (Henry Fonda) and Buck Cantrell (George Brent).  When Preston ends up contracting yellow fever, Julie will do whatever she can to redeem herself and make her worthy of Preston’s love.

Julie Marsden is the hurdle to overcome if you want to enjoy Jezebel; she’s a prickly one.  I will say the redemption is easier to buy than Scarlett’s in Gone With the Wind, but you really have to push aside your issues with the character.  Julie is described as a petulant, spoiled, selfish girl who can’t be nice to people: “Politeness was never one of Julie’s virtues.”  She’s reckless and imperious, like the horse she gallops in on.  She’s also sexually reckless in the way she plays Buck and Preston against each other; she’ll go with any man to the party, whether he’s her betrothed or not.  Naturally, Julie’s stubborn as a mule but I never felt that her demands were totally unreasonable (stay with me).  When she barges into Preston’s office to make him go to the dressmakers, she wants to spend time with him but can’t figure out a better way to go about it.  The problem is her misguided belief in male training: “I been trainin’ him for years.”  How is this training any different from the way women are “trained” to behave?  Preston is going to be her husband, and yet he talks down to her.

When she tells her Aunt Belle (Fay Bainter), “This is 1852…not the Dark Ages” I felt f or her.  She’s been spoiled and trained to be impressive, but she’s castigated for utilizing those techniques in new ways.  Take the argument she has with Preston where she asks him “Why do you treat me like a child.”  He replies, “Because you act like one.”  Yes, she does because women in this time period are infantilized and told to rely on men.  It isn’t helping that prior to this General Bogardus (Henry O’Neill) tells Preston that Julie needs “a firm hand” – like a horse – and tells a story about a friend of his who took a hickory and flailed his wife for being disobedient like a child!  I just couldn’t get past the alternating viewpoints of the script; Julie acts how she’s been trained and Preston is told to reinforce childlike techniques, but she’s villainized and given the blame.  Julie sarcastically retorts to Preston, “I forgot I’m a child,” goading him by acknowledging that’s how she’s been told to act; the character is smarter than given credit for.  You have a similar double standard with regards to gossip.  Buck can’t stand when people gossip about Julie, and gets into two duels because of it; whereas when the women talk about Julie, it’s just them being women.

Davis is excellent, as is expected, and this ties with Dark Victory in terms of performances.  Her Julie Marsden is willful and tempestuous; a woman who shouldn’t be bound to any man.  Everyone who watches this remembers Davis entering the ball in the scandalous red dress (several people maintain the belief a colorized cut exists, but that’s untrue).  The red color is perceived as vulgar but everyone, but red also stands for passion, war, and love; all of which Julie embodies in some form throughout the film.  Her wearing of it is also another attempt to spite Preston, while simultaneously declaring that no man will ruin her good time.  The plan backfires, though, when it makes her a spectacle and not a sensation.  Her eyes say so much throughout the film, especially as she goads Buck and Preston, expecting a reaction from them.  Later on in the film, her look changes to impress to the audience her changing attitudes; when she loses Preston she wears mourning black and wears her hair in a severe bun when she cares for him; upon meeting Preston again she returns to the white that he wished she would wear at the party in a bid to alert him that she’s remained virginal and faithful.

Henry Fonda gives another performance that knocked me back, but he’s understated compared to the showy Davis.  He’s mild-mannered with a threatening underside, especially when he gives death glares to everyone at the ball.  He dares them, with his eyes, to make a comment about Julie’s red dress.  He’s the perfect gentleman who bears his stubbornness in silence (really, Julie and him are peas in a pod), refusing to give in to her demands and marrying another woman.  Julie is under a delusional, selfish belief that Preston will come back to her, but Preston is colder (and meaner) than Julie; he moves on with his life in secret, uncaring of Julie’s thoughts.  I did wish that Julie and Buck ended up together because George Brent is pretty damn sexy in this role, for reason I can’t fully articulate; it could be his extreme sense of chivalry and loyalty to Julie, despite the fact that she’s cast him aside.  There’s a lot of innuendo in their discussions, and Julie breaks his heart when she declares that his “stupid code – it’s for fools.”  She causes his downfall, turning his desire to fight for her into a match ending in his death. 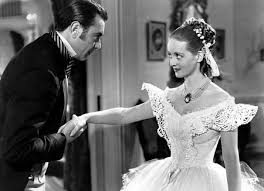 Jezebel is a complex movie in spite of the straightforward conventions of the narrative.  You see a complete life played out in the character of Julie Marsden; a spoiled girl who goes from angry, to supplication, to conquest/revenge, and eventually redemption.  I couldn’t quite buy her redemption, and the conventions of the time period in which the film is set seem to be ridiculous to the writers as well.  Other than that, the performances and story are fantastic and worth watching!