Kino Classics’ Mario Bava Collection continues to put out quality transfers (although skimping on bonus content) of movies that wouldn’t get that type of treatment otherwise.  For several decades, Kidnapped (also known as Rabid Dogs according to IMDB) was considered a lost film.  After Bava’s principle investor died in a car crash, the movie was wrapped up in litigation, unable to be completed.  After several years, and with the help of leading lady Lea Lander and Bava’s son, Lamberto, the movie was completed and released in 1997.  There is another cut of this film available via Netflix Instant in a 3-hour format and I’m intrigued to see what was added as this release is a lean 95 minutes.  I wouldn’t tout this as a lost masterpiece, but Bava tries something new and it’s a blow that he never got the chance to enter other genres.

A trio of bank robbers pull a heist on a pharmaceutical company.  When everything goes wrong they take three hostages – a man, his ill son, and a woman – on a lengthy car ride to get out of the city.  Driving around on a hot day with no air conditioning, the group of thugs and innocent bystanders must fight to survive. 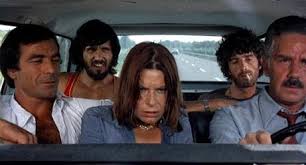 After years of being at the forefront of Italian horror, Bava transitioned into the hard-boiled cops and robbers genre that was taking Italian film by storm.  Concurrently, the 1970s saw an uptick in violent films about angry men; slow-burn movies punctuated with shocking moments of brutality.  Kidnapped’s original title, Rabid Dogs, hearkens back to movies like Straw Dogs and Last House on the Left with a stylistic know-how and a tight control on the violence that those past films lacked.  On the violence front, there is still the requisite neon red blood that Bava celebrated.  His style helps turn a knife with blood on the blade into a shiny beacon, where the blood almost glows in its neon luminescence.  As the characters drive around, Bava understands where the violence will receive effective gasps and plans out each moment for maximum surprise.  You’re aware which characters will die, but you’re never sure when, so when a character stabs something you immediately believe it’s a person; once it’s revealed to be the seat that’s stabbed, Bava gets a strangled laugh and sigh of relief from his audience.

Whilst moving away from horror, there’s still Bava touches hearkening back to his earlier work.  I already mentioned the bright blood, but the overall tone remains claustrophobic, building to a crescendo of violence that shocks and horrifies.  The group of thugs do seem culled from The Last House on the Left which is off-putting; there’s the cool Dottore (Maurice Poli), the knife happy Blade (Don Backy), and rapist 32 (George Eastman).  Dottore is such a calm figure whose shedding of clothes is the only indication that he’s feeling the heat, literally and figuratively.  You do start to believe he’s an incompetent leader since he hired two buffoons in 32 and Blade.  Poli is menacing with his sunglasses keeping his eyes, and thoughts, closed to the audience; Backy and Eastman are obviously enjoying the sociopathic antics of their characters, but they’re cartoon villains that belong in an exploitation film.

The treatment of the female character, Maria (Lea Lander), probably bothered me the most and did a lot to hinder my enjoyment overall.  The 1970s were very unkind to women, and would only get worse as the response to Women’s Lib became louder.  I referenced Straw Dogs as being in the same vein as this, and for those that have seen Sam Peckinpah‘s film, you’ll understand what I mean.  Maria is threatened with sexual assault and violence throughout by Blade and 32.  At one point, she’s forced to urinate in front of them, and is sexually assaulted in the backseat.  The duo even go so far as to declare her a whore upon meeting: “Maria.  Like the Madonna” they say, cackling.  They have little regard for her or women in general, and that certainly puts the audience against them.  However, the movie puts Maria through hell only to kill her at the end of the movie.  There are reasons for her having to be killed, but after watching her be tortured for 93 minutes you wonder if Bava reveled too much in her demise, or simply didn’t care about her as a character.  Maria isn’t an isolated incident, as the camera becomes 32’s eyes as he oogles a woman’s breasts; the entire frame filled with heaving bosoms.  The fine line between the villains thoughts and the directors became blurred to the point you’re questioning who’s the real misogynist.

The pacing presents the biggest challenge, and in an hour and 35 minute film there’s  a lot of downtime.  Scenes go on with light banter, and while it enhances the violence it also creates a fair amount of boredom; Hitchcock, Bava is not.  The camera techniques are fascinating, with the lens pointed right in the actors faces, refusing them the ability to get away from all the characters that surround them.  Throughout the film, the camera goes from the front seat to the back, and you have to ask how they all fit in such a small Italian car.  When Maria grapples to fling herself out of the moving vehicle it isn’t a means of escape from the criminals; it’s an escape from the confined environment.  The only other calm person in the group is driver/main hostage Riccardo (Riccardo Cucciolla).  You never learn much, other than he has a sick son he’s desperate to get to the hospital, and in these types of films that’s all the characterization you need.  By the film’s midpoint he’s defeated and exhausted, telling Maria to do what she can to stay alive.  The ending twist certainly helps you understand who Riccardo truly is, and it’s the one element of the movie where you immediately want to rewind the disc and start all over.

As with Kino’s release of Black Sabbath, the bonus content is slim, although there are actually features; sadly, they’re just trailers for the last few releases in the Mario Bava Collection (Black Sunday, Hatchet for the Honeymoon, Baron Blood, Lisa and the Devil, and The House of Exorcism).  As with Black Sabbath the film is dubbed, but for a movie such as this where it’s all screaming having subtitles causes the emotion to be lost on the actors.  On top of that, the film is dubbed in Italian, but I noticed several of the actors speaking English.  Is it because some of the Italian actors had thick accents?  I would have enjoyed possibly a dubbed English cut or at least some way to watch it other than the Italian with subtitles.  If you watched the extended cut, you won’t find it here either.  I’m wondering if Kino has bigger plans to include extended/US cuts with this and Black Sabbath in the future.

Overall, Kidnapped is an interesting experiment that sort of pays off for Bava.  It’s great that this finally got the release it deserved, and even better that Kino beautifully rendered it for Blu-ray.  The movie’s violence and treatment of women could turn off viewers, but the story is fascinating.  As for the disc, the bare bones presentation doesn’t quite justify the additional cost, and viewers who bought the original DVD with both cuts will probably ignore this.  If you haven’t seen it and are sick of Bava’s horror films, I recommend giving it a try.