In this week’s update we have a TCM movie night you should stay in for (unfortunately, I won’t be able to join you since I’ll be in class), as well as more DVD/Blu-ray news!

TCM’s guest programmer this week is film star (and star of ABC’s Revenge), Madeline Stowe, who will be presenting four of her favorite movies tonight starting at 5pm Pacific time.  Looking at her list, Stowe shares some favorites with me!  She’ll be sitting down with Robert Osborne to discuss Joel McCrea and Jean Arthur in The More the Merrier (1943) at 5pm; then Elia Kazan’s masterpiece Splendor in the Grass (1961) at 7pm; that’s followed by Vittoria Di Sica’s Bicycle Thieves (1948) at 9:15pm, and Alfred Hitchcock’s I, Confess (1953) at 11pm.  A fine night, as always, on TCM so if you aren’t busy sit down and enjoy!

Kino Classic: Kino is preparing for Halloween as well with their upcoming release of Bela Lugosi in The Devil Bat.  The movie tells the story of a scientist (Lugosi) who turns a mutant bat into his servant; pretty standard Lugosi fare.  Both Blu-ray and DVD are remastered from archival elements for HD, and will include audio commentary by film historian Richard Harland Smith and an image gallery.  The Devil Bat hits shelves September 17th and you’ll be seeing a review from me about it in the future.

Warner Archive: Powell and Paramount rule the day with this week’s Warner Archive releases.  For the former, you can four films as part of the “Powell at Paramount” collection.  During the early 1930s, Powell worked briefly at Paramount before he cultivated the persona that would carry him from The Thin Man and beyond.  The pre-Code classics in this collection include: The Road to Singapore (1931), High Pressure (1932), Private Detective 62 (1933), and The Key (1934).  Warner is also putting out a series of Paramount Westerns:  The Tin Star (1957), Chuka (1967), Waterhole #3 (1967), and Bad Company (1973).  You can order all of these, manufactured on-demand, from Warner Archive.

Columbia Classics/TCM: Columbia Classic is producing another installment of their Film Noir Classics series.  In volume four you can snag five noirs for the first time on DVD: So Dark the Night (1946), Johnny O’Clock (1947), Walk a Crooked Mile (1948), Between Midnight and Dawn (1950), and Walk East on Beacon (1952).  Each film is remastered for DVD and will include a video presentation from Martin Scorsese.  You can purchase this exclusively through shop.TCM.com starting September 16th. 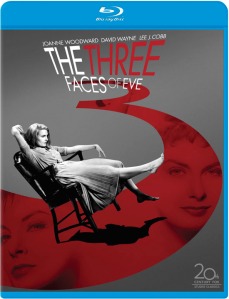 20th Century Fox: And finally from Fox, you can get a remastered Blu-ray copy of The Three Faces of Eve starting November 5th.  I reviewed Joanne Woodward’s finest hour here, and it’s great that this is getting a proper Blu-ray release; Fox has been doing beautiful transfers lately.  The only new item is the cover art as the bonus features carry over over from the last DVD release, so if you don’t have this at all it’s worth a purchase.