Feel that chill in the air; see the leaves in the wind?  If so, you might have entered Fall, aka the time when TCM plays horror movies on a loop!  It was REALLY hard to refrain from just listing horror movies in all twelve slots, but I did my best to balance everything out (although the return of the TCM Trio is in honor of the month).  So grab a cup of your favorite pumpkin spice flavored drink, and let’s look at TCM in October.

**All times are Pacific.  The dates/times are controlled by TCM and can be changed at their discretion** 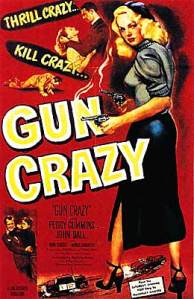 I’ve heard about Gun Crazy for years, and its indelible images of femme fatale Peggy Cummins are always in film noir or film history books, so I guess it’s time I watch it.  The movie is a pre-Bonnie & Clyde story of lovers (Cummins and John Dall) who go on a violent crime spree.  For 1950, the era of disaffected youth, its message is right with the times and I’m already a fan of Bonnie & Clyde, so a precursor has to be great.  Gun Crazy airs tonight at 10:45pm as part of TCM’s Story of Film series.

As much as I adore The Red Shoes, I haven’t watched any of Michael Powell and Emeric Pressburger’s other works.  A Matter of Life and Death follows a deceased aviator (David Niven) forced to confront a celestial court and argue why he deserves to live.  The concept sounds fantastic, on par with Heaven Can Wait (both the original and remake).  The cast includes Niven, Kim Hunter, and Raymond Massey, and the mix of fantasy and reality – considering the WWII era – sounds spectacular.  A Matter of Life and Death airs early on October 2nd at 3:30am. 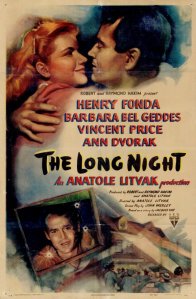 Another early morning watch is 1947’s The Long Night.  If you recall, I was placing a moratorium on Henry Fonda movies after I spent a week reviewing his DVD box set, but I think it’s time to lift the ban.  The Long Night is a film noir about a veteran (I’m assuming Fonda) who has to save his former lover from her sadistic boyfriend.  The movie has Vincent Price, and I hope to God he’s the sadistic lover because Vincent Price is so damn good when he’s evil and this wouldn’t be a hammy role for him.  The movie is also directed by acclaimed director Anatole Litvak whose directed several movies I own, but haven’t watched…that could be good, right?  The Long Night is on, October 4th at 4am.

It’s time for a Tracy/Hepburn film; this month’s is Keeper of the Flame!  Keeper of the Flame follows a reporter as he writes an article about a recently deceased war hero.  I think it’s safe to assume that Hepburn is the eponymous “keeper of the flame” while Tracy is the jerk reporter trying to usurp the memory of the fallen war hero, and somewhere in the middle the two actors fall in love?  It’s predictable, I’m sure, but there’s also something watchable when these two are on the screen together.  You can watch Tracy and Hepburn fall in love when Keeper of the Flame airs October 6th at 3am.

Thank you, TCM for continuing to indulge my growing obsession with Margaret O’Brien.  After their recent airing of Lost Angel, TCM will be showing this Cyd Charisse/O’Brien starrer, The Unfinished Dance.  O’Brien plays a young dance student who idolized Cyd Charisse, and who wouldn’t?!  I’m a sucker for dance movies, and long-time readers already know I love O’Brien in everything, so this is a must-watch for me.  You can dance with Margaret O’Brien when The Unfinished Dance airs October 8th at, you guessed it, 3:45am. 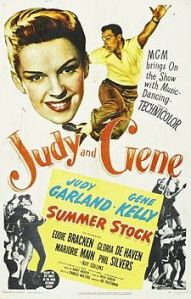 After I watched A Star is Born, I vowed to watch Judy Garland is other things that weren’t The Wizard of Oz or Meet Me in St. Louis.  Summer Stock is another movie whose images are always in film books.  The movie’s claim to fame is Garland’s performance of “Get Happy” which I want to see presented.  Summer Stock also stars Gene Kelly, and him opposite Garland sounds like sheer perfection.  Summer Stock airs October 8th at 12:30pm. 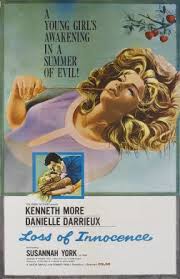 This one was a whim, and sometimes my whim choices yield negative results.  Loss of Innocence stars Danielle Darrieux  as teenage girl who “becomes a woman” on a European vacation.  I’m reading Lolita for school, so I’m wondering if this was a subconscious choice?  The movie sounds to me like a classier, high falutin’ version of Gidget although I feel I’m totally off-based.  You can prove me right or wrong when Loss of Innocence airs October 10th at 1pm.

Director Stanley Kramer directed the legendary Guess Who’s Coming to Dinner and Judgement at Nuremberg; Not As a Stranger was his debut film, and the debut’s always worth a look to see whether a director has improved or not.  The movie tells of a medical student desperate to become a surgeon.  With a cast packed with A-list talent – Olivia De Havilland, Frank Sinatra, Robert Mitchum, and Gloria Grahame to name a few – there’s got to be something there to attract them all.  Not As a Stranger runs October 11th at 4am.

I enjoy a good wacky comedy every now and then; although I’m unsure why I believed Brewster’s Millions was directed by Preston Sturges.  Maybe it sounds like a premise Sturges would work with (Christmas in July sounds similar)?  Brewster’s Millions details the story of a veteran given a million dollar inheritance he has to spend in two months.  Readers may recall the 1985 remake with Richard Pryor.  The premise sounds like a good time, and when you’re glutting yourself on horror movies all month, sometimes you need a little laughter.  Brewster’s Millions airs October 15th at 7:30am.

We’re halfway through the month, and the first horror movie I have here airs on the 18th.  I’m pretty proud of myself!  You know I can’t pass up a hokey, easily explanatory title, and Burn, Witch, Burn gets that distinction!  The movie follows a college professor who uncovers his wife’s past with witches; I Married a Witch this is not!  The film is from 1962, so it’s probably cheesy as hell with hokey effects, but when you base your watching of it on title alone, what do you expect?  You can check out Burn, Witch, Burn on October 18th at 5pm during the Friday Night Spotlight devoted to horror this month.

Why haven’t I heard that Joan Fontaine made a horror movie?  It’s something that wouldn’t have entered my mind previously, but it makes perfect sense (and no, I don’t consider Suspicion to be a horror movie).  The Devil’s Own involves an English schoolteacher who discovers that occultists live in her prime town.  I love a great movie about satanists in suburbia; they’re all like the ones in The Seventh Victim, aren’t they?  The Devil’s Own airs October 19th at 7:30am. 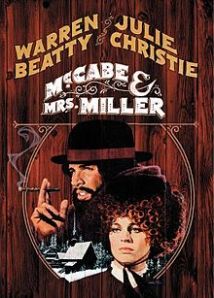 Feels like there was a lot of Warren Beatty references in this Top Twelve and they were all unintentional, except this one.  McCabe and Mrs. Miller is a staple of 1970s filmmaking, and I’m a terrible person for having avoided it in the past.  A revisionist Western about a gambler (Beatty) and the prostitute that captures his heart (Julie Christie) is considered one of the best in the genre, as well as one of the best movies made within the decade.  McCabe and Mrs. Miller runs October 28th at 8:15pm.

Turn off the lights, snuggle under the blankets, and prepare to be scared with three horror movies (and I’m adding a fourth for good measure) in rapid succession.  Boris Karloff meets his mate in the continuation of the Frankenstein series, Bride of Frankenstein at 8:15pm; next, Karloff plays a lovesick mummy in The Mummy at 6:30pm; later, a beautiful woman fears she’ll turn into a cat in Val Lewton’s Cat People at 8pm; finally, Bela Lugosi knows voodoo in White Zombie at 9:30pm.  October 26th is a great night to settle in with TCM horror!