Another Christmas gift review in case you’re stumped for what to buy your special classic film loving someone!  Twilight Time‘s release of Jane Eyre made my Holiday Gift Guide, sight unseen, and since watching the Blu-ray it was deserving of its spot.  The movie is less than perfect at times, much of it boiling down to your enjoyment of stars Jane Fontaine and Orson Welles, but the transfer is typical Twilight Time: great picture/sound and a plethora of bonus content (more than usual).

Jane Eyre (Fontaine) is a mild-mannered young woman who recently acquires the position of  governess at the majestic Thornfield Hall.  Once there, she meets the taciturn Mr. Rochester (Welles) who hides a dark secret.

I’m a fan of the Bronte sisters work, and the multitude of adaptations all have their pros and cons.  Jane Eyre isn’t my favorite book, by a long shot, but this Robert Stevenson adaptation is an intense, early translation of Charlotte Bronte‘s novel.  The Gothic architecture of Thornfield is phenomenal, and Twilight Time’s Blu-ray transfer perfectly renders the blacks and grays of the world, bathing corners in shadows.  So much of this movie takes place in a dark, bleak world from which Jane feels no escape until she starts her romance with Mr. Rochester.

With Fontaine and Welles in the leads, there’s a necessary element of disbelief the audience has to transcend in order to derive enjoyment.  Joan Fontaine perfected the meek matron of perfection between this and Rebecca (a movie which tried heavily to establish itself as a classier take on this work), and it’s a perfect role for her.  I’ve always found the character of Jane Eyre a nuisance who really never blossoms into anything beyond the paragon of propriety and sainthood, so Fontaine is perfect.  There are moments of levity within her performance, particularly opposite Margaret O’Brien‘s Adele (I’ll get to her in a minute).  Otherwise, the rest of the movie is Fontaine being shy and quiet.

Welles is a sufficiently intimidating and frustrating Rochester.  Again, the character of Rochester is a somewhat abusive character, and Welles was perfect at the time.  He isn’t a dashing leading man, a necessary trait for the character, and the movie emphasizes his physically intimidating presence.  The script removes the campier elements of the character (such as Rochester playing a fortune teller which I want to see in an adaptation at some point), and Welles inhabits the role.  Conversely, one could see Welles as disinterested in the role.  He’s taciturn and angry, but that’s really it.  There’s little chemistry opposite Fontaine to boast about, but Welles and Fontaine make it work.  I can’t say either one is miscast, as they’re the best versions for the time, but the script limits their connection in a way wherein you believe they can’t ever transcend their differences to find happiness with each other.

And let’s not forget Margaret O’Brien as Rochester’s ward, Adele.  O’Brien steals the show as the precocious Adele, and her French accent is flawless.  I forgot O’Brien was in this movie, at the tender age of six, no less, and she is hilarious!  I adored every sequence she was in and this just cemented for me what an amazing child actress she truly was.

As for Twilight Time’s bonus content, this disc is evident of the increased bonus content output the brand is attempting to put out.  Several of their releases have focused on isolated soundtracks and a stray commentary, but Jane Eyre goes all out.  You have the requisite isolated score, which sounds good although I don’t believe Jane Eyre has a stellar soundtrack.  On top of that, there’s two commentaries: One, involves Orson Welles biographer, Joseph McBride and Margaret O’Brien.  This was my favorite, despite the two obviously recording in separate areas and times.  O’Brien has a keen memory and drops amazing bon mots about making the movie and working with two huge stars at such a young age.  McBride focuses more on Welles’ performance, which is good but lacks the all-encompassing feature of O’Brien.  Definitely one of my favorite bonus features on a TT disc.

There’s also an additional commentary with Twilight Time essayist Julie Kirgo, Nick Redman, and Steven C. Smith.  This one provides great camaraderie with differing voices as they explore the movie.  It’s akin to watching a movie with friends.  Kirgo’s essay, another favorite element of Twilight Time’s releases, also discusses the movie’s similarities to Rebecca (there are several) and how that helped/hindered the movie and director Robert Stevenson’s career.  Other features on the disc include a wartime propaganda short directed by Stevenson which is an intriguing piece of nostalgia, as well as a 20-minute featurette on the men involved in the production, particularly Stevenson and Welles.  I found this particularly odd considering the book is known for its female author and the female protagonist.  Do we really need a twenty-minute featurette looking exclusively at the men?  Why not a featurette on the cast in general?  The original theatrical trailer is also present on the disc. 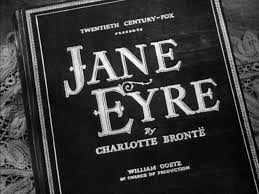 Overall, Jane Eyre is a beautifully rendered Gothic story with two indomitable performances by Joan Fontaine and Orson Welles.  Their acting isn’t on par with some of their later, or earlier, works and the movie suffers from conventions of the time, but it’s a stellar adaptation.  On top of that, Twilight Time ups the ante with additional features, including two fun commentaries, making this worthy of putting into your stockings this holiday season.

Interested in purchasing today’s film?  Use the handy link to purchase directly from Screen Archives