Sorry for the delay with our last Journeys in the Disney Vault review, but Disney (and myself) saved the best for last.  After my lukewarm reception to the last few Disney films, and my give and take review of Tangled, Disney finally breaks they mold they’ve been chipping away at since 2000.  Frozen reconfigures the princess narrative and gives girls a level of inspiration never witnessed in a Disney movie before.  Coupled with the long-delayed first directing/screenwriting credit for a female (yes, it took all the way up to 2013 for Disney to give a woman a directing opportunity; the last time a woman was credited with a Disney script was Beauty and the Beast!), Frozen is a pitch-perfect movie Disney fans are going to hail for decades to come, alongside the greatest works of the Disney Renaissance.  With the close of this series I’m happy we’re ending on an epic high note.

Sisters Ana (voiced by Kristen Bell) and Elsa (voiced by Idina Menzel) were once as close as could be, but when Elsa’s inability to control her powers of ice and snow almost end up costing Ana her life, the two sisters are separated for decades.  When their parents die, Elsa becomes queen of the kingdom of Arendelle, but her powers get the best of her and she’s treated like a monster.  When she runs off into the mountains, Ana must team up with an ice seller named Kristof (voiced by Jonathan Groff) to bring Elsa back and lift the permanent winter which has descended on Arendelle.

Considering the movie has only been out for a week, I’ll give the spoiler warning right now, in case you want to enter the movie fresh.

Disney’s efforts to appeal to a changing demographic of children has been well-documented in these reviews, and before it involved relying on CGI in lieu of storytelling or memorable characters.  With that road being a dead-end, Frozen goes back to the basics of Disney animation: story, characters, and music.  All three beautifully blend together to tell the heartfelt tale Disney has been searching for over the last decade.  The film is loosely based on Hans Christian Anderson’s The Snow Queen, which Disney has attempted to adapt since the 1940s.  For various reasons the story never came together, with Michael Eisner kickstarting the idea at the beginning of the 2000s and losing animator Glen Keane over frustration at the project failing to materialize.

Frozen takes the basic tenet of Anderson’s tale – Elsa can control ice and snow and is the queen of Arendelle – and turns it into a story about sisterhood.  The script, written by Jennifer Lee, is self-aware of Disney’s past conventions with the princess genre and seeks to shatter every one.  Once Elsa becomes queen there’s a large coronation where the gates of Arendelle, having been closed for years due to Elsa’s powers, are opened.  As part of the event, Ana meets Prince Hans (voiced by Santino Fontana) and after a darling meet cute song called “Love is an Open Door,” the two decide to wed.  Okay, standard Disney mechanics at work, but cue Elsa who asks Ana why she would want to marry someone she’s just met!  We saw this question raised in Disney’s live-action, Enchanted, but this is the first Disney animated tale which emphasizes it’s okay to wait to get to know a person before jumping into marriage.  The modern perspective continues with the act of true love needed to break the spell at the end – generally reserved for true love’s kiss – coming through Ana sacrificing herself for Elsa.

Frozen isn’t a romance, but a story about sisterhood.  The opening frames quickly and succinctly introduce our two princesses as young girls who loved spending time with each other.  Elsa feels guilty over her accidental harming of Ana, and at her parents urging decides to break her sisterly relationship to prevent her sister additional harm.  The hilarious and bittersweet song “Do You Want to Build a Snowman” establishes the years passing, and further estrangement of the two sisters.  Once Elsa leaves the kingdom to seek her own identity (performed via the show-stopping “Let It Go”), Ana goes on her own journey to reunite with her sister.  Frozen isn’t a sweeping love story, but a journey of self-discovery and establishing an identity within a world defined by male patriarchy.  I’m hoping to go into a longer essay about this subject for another site (and when it’s written I’ll be sure to include a link), but Frozen tells a story young girls should be taught: that finding love is an organic experience and never trump the bonds of family and female friendship. 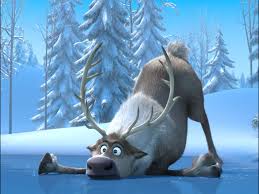 Aside from the story, Disney also succeeds in the voice cast and music.  Too often in the last decade Disney has relied on A-list names to sell their movies, and while the names of the cast are well-known to Broadway and television fans, they’re not household names nor does their voice work easily identify them.  Menzel had a non-singing role in Enchanted, but as Elsa she’s vulnerable and determined to live a life free of control.  Her key song, “Let It Go” and her duet with Kristen Bell are beautiful and each woman has a vocal range unheard of in past songs; sorry, Mandy Moore, but you can tell a Broadway star.  Jonathan Groff, also a Broadway vet is fun as the stalwart Kristof, although I was surprised he isn’t given a more significant song to sing.  Santino Fontana is a breath of fresh air as the duplicitous Hans and his vocal range is great, while Josh Gad is hilarious as Olaf.  Speaking of Gad, I was hesitant about this movie because of his cutesy snowman, but thankfully the script knows how to integrate him within the core narrative while never distracting from the plot between the human figures.  The only nitpick I have is with the reindeer sidekick, Sven.  He’s far too similar to the horse from Tangled, right down to both acting like dogs (just use a dog character if you can’t animate anything else).

There are other similarities to Tangled, but thankfully the movie’s plot is unique enough so they don’t feel derivative.  There’s been a bit of controversy over male animators having trouble animating the “complex” female face, and both Elsa and Ana are almost carbon copies of Rapunzel; Menzel, Bell, and Fontana all auditioned for Tangled.  The kingdom of Arendelle also bears eerie similarities to the kingdom in Tangled, although any comparisons could be due to the new land in Disneyland (a bit of product placement, perhaps?).

As a whole, Frozen is the best Disney animated film to come out in decades.  Tangled was good, but heavily flawed and mired in the outdated mode of Disney fairy-tales.  Frozen is the movie strong enough to propel Disney animation into the next twenty years with its emphasis on female independence.  Of course, the presence of Jennifer Lee as co-director and screenwriter cannot be ignored.  Female perspective must be present in all aspects of feature filmmaking, simply to provide differing points of view and Frozen proves how sorely that’s needed in mainstream cinema.  I’m aching to see this a second time, and I urge you to take your kids out to see this in theaters!

NEXT WEEK: We close the Disney Vault with some final words and a conclusion of this animated journey.