Veronica is all prepared to celebrate the New Year, and introduce another as the mascot of Journeys in Classic Film.  As I did last year, I’m counting down the top 10 most-read articles this year on the site.  Since I actually have another year of numbers to go off of, I’ll also touch on where these posts rank in the all-time views.  Any article or review which ended up being a favorite of yours?

My first, and as of the moment only, Mint in the Box Review sneaks in at number ten.  Compared to last year, this is the only 25 Days of Christmas review to enter into the 10.  (Last year reviews of How the Grinch Stole Christmas, A Charlie Brown Christmas, and The Polar Express all had spots.)  The Sound of Music was on everyone’s lips the last few months, especially with the divisive reaction to Carrie Underwood’s live performance which probably aided in its popularity.  My review of The Sound of Music stands as the 15th most popular article in blog history. 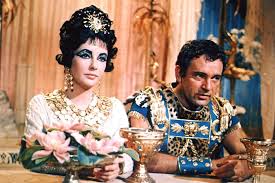 This Burton and Taylor epic was my first huge giveaway courtesy of 20th Century Fox.  I was ecstatic to have the opportunity to watch this on the big screen, despite the prodigious three-hour runtime, and it continues to grow as one of the most enduring epics of all time.  Elizabeth Taylor was never lovelier and her love for Richard Burton oozes off the screen.  With 412 hits, Cleopatra is the 33rd most-read article of all time.

Oh, am I both happy and horrified to have this piece of tripe enter my life.  In a way, I’m surprised my review of Goodbye, Norma Jean, written all the way back in August 2012 has been read as many times as it had; it currently ranks as the 8th most popular article of all time.  I think it’s endured because of how mad I got while reviewing it.  You can tell I’m beyond pissed writing about this exploitative, misogynistic, offensive piece of garbage; or that could be a way for me to explain away the lack of commas I used.  Hell, I’m getting mad just recounting writing about it.  The movie certainly stuck with me, and during my Warner Brothers trip I discussed this with my blogger friends who never heard of it (thankfully!) and refused to watch it.  If anything, my review should go down in history for my use of the word “jack wagon” which really needs to become a thing!  I pray for the day someone says they like this, or director Larry Buchanan leaves a message on my blog.

I understand why certain reviews end up here: either they’re bad movies I skewered, written in a funny style, or connected with audiences during a particular time.  One I never expected to see is my 31 Days of Halloween review of Angel Heart.  Halloween of 2012 was the last year I implemented modern movies into the blog, and this feature hasn’t stuck with me at all since.  The various comments posted were surprised I referred to this as a cult classic, and I maintain the word is appropriate.  I haven’t watched it since – it’s on several times on the various movie channels I have – but this review lives on.  As it stands, Angel Heart is the 11th most popular post of all time.

There may be only one review from the 25 Days of Christmas series in this year’s top 10, but we’re looking at the second review on this list from my 2012 31 Days of Halloween series.  My review of The Bad Seed is the 9th most popular article of all time, and I continue to have this as a staple of my Halloween viewing every year.  The story of Rhoda Penmark makes me despise children all the more, and the campy quality of the film continues to cement it as a Halloween classic.

It’s nice to have this as the only book review to make the top 10, and in the top 5 to boot!  The book review series had many names throughout the year, and as of now it’s nameless, but people always appear to enjoy reading about how others perceive classic stars; it’s hard to hear about a star’s life, honestly, in their own words.  Neither Veronica Lake biography is true – I also reviewed the biography of Lake co-written by her mother – and so far no one’s tackled Lake’s life since the late ’70s.  Lake’s book remains the better of the two, but I dream of a better book worthy of her someday!  Ronnie’s autobiography peaks as the 10th most read article of all time.

Alice in Wonderland was the second to last Journeys in the Disney Vault article of 2012, and I can’t figure out why it’s one of the only Disney Vault reviews to place within the top 10.  The series concluded this year and I wouldn’t say Alice is the best nor worst of Disney’s movies.  If anything, the 1950s was an early golden age for the studio.  It’s great to have something from my first long-running series place so high, and Alice in Wonderland remains the 12th most-popular piece in blog history.

The Gone Too Soon Blogathon was the first blogathon I participated in when I started the blog, and since then this post continues to be read at least once a month.  I’m unsure if it’s the continued presence of McNamara’s films on TCM or the repeats of her episode of The Twilight Zone (itself replaying during the show’s yearly New Year’s Eve marathon the last two days) which contributes to its popularity.  In fact, this post was the most-read article on the day I received the highest traffic this year!  To show just how popular this post continues to be: it’s the 6th most-read post of all time.  Wherever Maggie is, hopefully she’s happy people are thinking about her.

Did I say two 31 Days of Halloween posts from 2012 were in the top 10?  Well, better make it three!  My review of The Shining is the number 2 most-read post of the year, and actually is the 3rd most-popular of all time with a whopping 1,233 hits in the two years of the site!  I’m surprised that in a single calendar year this review has been read almost a thousand times.  You guys really love your horror classics?

One of the reasons I’m reviving Biopic Theater is this right here.  For the second year in a row, HBO’s original movie, The Girl appears on the top 10 most read articles and it’s actually clambered its way up to number 1!  If you recall last year’s countdown, The Girl peaked at number three with 911 hits; since then it’s garnered an additional 108 views, surpassing everything to become the number one most-read article in blog history with 1,905 hits in its time published!  I’ve refrained from watching the movie since the article was published, and have no intentions of doing so again, but apparently you guys continue to enjoy it!

That’s all for another year of popular posts.  Will The Girl stay at number 1 by the end of 2014 or will a new article/review stomp on it?