It’s that time of year: TCM’s Summer Under the Stars, where a new star is given a 24-hour movie marathon everyday from August 1st through the 31st. I’m doing something a bit different this year. Where I usually picked my own stars to honor, I’m going to follow TCM’s schedule and spotlight a movie almost every day (Monday-Friday) of the month. With that, several of my choices have already appeared on past TCM Top’s so I’ll be culling my descriptions from those lists. What stars/movies are you excited for this month?

I recently watched Coming Home, and since then I’m watching more Jane Fonda movies.  Klute was the film which nabbed Fonda an Academy Award for Best Actress and the premise sounds intense: a small-town detective (Donald Sutherland) is tasked with hunting down a man murdering prostitutes.  It’s modern by TCM’s standards, released in 1971, but it’s Fonda in her prime!  Klute airs at 12:15 am (so technically August 2nd).

When Ginger Rogers won the 1930s Leading Lady Tournament last week, a commenter had mentioned her work in Bachelor Mother, and at this year’s TCM Classic Film Festival, the film received a screening I missed out on. The plot is ripe for screwball antics as it follows Rogers’ character saddled with a baby that isn’t hers.  Rogers played characters you never expected to have kids, so I’m intrigued to see how this all turns out. Bachelor Mother airs August 2nd at noon.

My Choice: How Green Was My Valley

My Choice: The Clock

The Clock was recommended to me by a reader who felt I’d enjoy thisVincente Minnelli classic considering my love for Meet Me in St. Louis.  The movie’s premise revolves around a whirlwind romance between a G.I. (Robert Walker) and a woman (Judy Garland) who only have two days to spend together.  The brisk runtime is welcome and Garland is in capable hands with Minnelli (if Meet Me in St. Louis is any indication). The Clock airs at 10:15pm.

My Choice: Ball of Fire

Howard Hawks has crafted some amazing films, and I’ve heard nothing but good things about Ball of Fire (particularly since Gary Cooper and Stanwyck were lovers at the time).  Its been compared to Snow White, which I have to see to believe, and has a screenplay by favorite director of mine, Billy Wilder that screams comedy gold! Ball of Fire at 8:00pm.

My Choice: I Am a Fugitive From a Chain Gang

Paul Muni isn’t an actor I know much about, and I must confess his day wouldn’t appeal to me if not for my determination to watch almost everyday of SUTS. I own I Am a Fugitive From a Chain Gang on DVD, but have yet to watch the movie that’s cited as an eye-opener to prison reform. Either way, it’ll be interesting to compare this with Caged, in terms of prison films with regards to gender in the studio era. I Am a Fugitive From a Chain Gang plays at 8pm.

My Choice: Diary of a Chambermaid

I don’t often pick foreign films, but I’m compelled to seek out the works of bizarre filmmaker Luis Bunuel. Diary of a Chambermaid stars Jeanne Moreau as a woman who learns the family she works for is a bit strange.  What’s it going to be everyone?  I’m going with weird corpses in the basement or something. I expect nothing less from Bunuel. Catch Diary of a Chambermaid at 3:45am (officially August 9th).

My Choice: Nothing Sacred

Nothing Sacred is a public domain title that’s popped up on almost every website that streams films…and yet I still haven’t taken the time to watch it. Carole Lombard’s delighted me in everything I’ve watched so far, and Fredric March….damn, he’s growing on me! The plot concerns a terminally ill woman (Lombard) and the newspaperman who turns her into a national heroine. Let me guess, she’s cured by the end? No spoilers, please! Nothing Sacred airs at 11:45pm.

My Choice: The Constant Nymph

With the death of Joan Fontaine I’ve softened a bit to her work and decided to watch a few of her smaller titles (although I doubt fans of hers would say The Constant Nymph is lesser Fontaine). The movie follows a composer (Charles Boyer) who falls for his wife’s cousin, who I’m assuming is Fontaine. Boyer is an actor I can take or leave, so I’m watching for Fontaine herself. With the nymph imagery, am I wrong in assuming we’ll see Fontaine put on some Esther Williams moves?  The Constant Nymph airs at midnight on August 13th.

The Criterion Collection released Charlie Chaplin’s opus, City Lights, to Blu-ray recently. With that being said, I’ve only seen Chaplin in one film before: Modern Times (also airing at 3pm). City Lights is considered Chaplin’s masterpiece with his Little Tramp helping a blind flower seller. Since I have little experience with Chaplin at all, this might be the one to define his entire work for me. City Lights airs at 12:30am on August 15th. 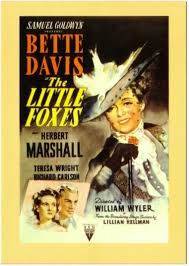 My Choice: The Little Foxes

Anything directed by William Wyler immediately goes on this list!  I’ve heard nothing but fantastic things about The Little Foxes, understandably so since it’s directed by Wyler and stars the incomparable Bette Davis. It follows an ambitious woman (Davis) fighting her brothers and husband to gain wealth. It also stars Teresa Wright who I’ve been saying I’ll see more of after loving her in Mrs. Miniver. You can catch The Little Foxes at 2:30pm.

My Choice: Somebody Up There Likes Me

I’ve read about this film in countless books due to the caliber of talent originally involved. This was meant to be a vehicle for James Dean before his untimely accident, and it stars Sal Mineo in his follow-up to Rebel Without a Cause. The connections to James Dean become three-fold with the appearance of Pier Angeli, Dean’s girlfriend. It’s also directed by Robert Wise who has created some of my favorite movies. Somebody Up There Likes Me runs at 2am on August 20th.

My Choice: The Mating Season

I recently watched Girl Trouble, a movie about a wealthy socialite mistaken for hired help, and maybe that’s why I picked The Mating Season (that or my love for Gene Tierney). Here, Ritter masquerades as a domestic in order to spy on her son’s soon-to-be in-laws. The film’s directed by Mitchell Leisen who hasn’t wowed me so far, but the cast looks impeccable and should elevate Leisen’s mediocrity. The Mating Season plays at 8pm.

My Choice: Wait Until Dark

There were countless choices I could make for Audrey Hepburn’s day, but I went with a movie I recently purchased and haven’t seen in years: Wait Until Dark. I’m sad I missed Alan Arkin at this year’s TCM Film Festival as I’m sure he had great stories about working with Audrey. Arking plays a jewel thief terrorizing a blind Hepburn whom he believes knows about his missing score. Wait Until Dark airs at 6pm.

My Choice: The Catered Affair

I’m a fan of domestic dramas and the cast for this one struck me immediately. Bette Davis plays a mother struggling to give her daughter, played by Debbie Reynolds, the wedding of a lifetime; Father of the Bride starring the mother? I can’t figure out if Reynolds playing Davis’ daughter is a good casting decision or not, but I enjoy both leading ladies. I’m also intrigued to watch Davis play a struggling mother in the 1950s. The Catered Affair kicks off the morning at 9:45 am.

My Choice: Murder, My Sweet

Philip Marlowe returns in Murder, My Sweet. Murder, My Sweet came out five years before Lady in Lake, and starred Dick Powell as Marlowe; the actor using this as a means of breaking out of his song-and-dance image.  The same blackmail, revenge, murder remains, but I’m excited to watch Claire Trevor in this one, especially after being wowed by her in Stagecoach. Murder, My Sweet airs March 24th at 9:15am. My Choice: A Cry in the Night

This one is a casting decision; I’ll watch Natalie Wood read the phone book. A Cry in the Night is one of Wood’s earlier roles where she plays a nice girl who’s kidnapped, leaving her police chief father (O’Brien) to save her. It’s a damsel in distress story but there’s got to be cheesy fun in it. A Cry in the Night plays in the middle of the day at 9:15am.

My Choice: Portrait of Jennie

The Portrait of Jennie stars Joseph Cotten as a painter who falls in love with a ghost played by Jennifer Jones.  I picked this one on Jones’ name alone because I adored her in The Song of Bernadette.  It’s pretty hard to screw up golden era ghost stories, or maybe I’m just forgiving towards them.  The Portrait of Jennie airs at 8pm.

My Choice: The Gay Divorcee

Fred and Ginger have several of their films on my Top series and this is the one I want to get to first. It tells of a woman who mistakes a man for a gigolo hired to end her marriage, perfect screwball material. I’ve seen clips of the dance sequences and can only assume the rest of the movie is as perfectly time. The Gay Divorcee starts off the morning of Betty Grable’s tribute at 6am.

My Choice: The Blue Dahlia

You had to know as soon as Ladd was announced as an honoree I’d have one of his pairings with Veronica set for the month. TCM’s only showing two of Ladd’s films with Lake – this and The Glass Key – but this is the one I’ve waited to get my hands on. It’s Fugitive-esque with a story about a man (Ladd) trying to prove he didn’t kill his philandering wife. It also stars William Bendix who appeared in previous collabs with Lake and Ladd. Watch The Blue Dahlia with me at midnight on September 1st (proof TCM knows my birthday!).