My final Film Class Wednesday movie is the fantastic Wizard of Oz.  This is a movie reviewed to death, so read my repost where I present a rather humorous take on the movie.  Something to note, this was also the closing-night film during this year’s TCM Film Festival.

It’s difficult reviewing a truly beloved film since there are few unexplored avenues you can go down without blandly reiterating how amazing it is.  For today’s review, let’s go funny.  There are a few things I’ve always wanted to discuss about The Wizard of Oz, mainly things which bother me.  So with that, I present this review of The Wizard of Oz.  Keep in mind, I love this movie, but that doesn’t mean it’s infallible.

First, my general thoughts about Dorothy and her journey.  I adore The Wizard of Oz; it’s unique, and I doubt we’ll ever see another one of its kind again.  The Wizard of Oz is one of those rare films that has the ability to transport you to an entirely new place and you believe in it wholeheartedly.  There have been mystical or fantastical places depicted in film since the medium’s inception, but The Wizard of Oz makes you believe Oz exists. When Dorothy opens the door of her house and enters the Technicolor world of Oz, it feels more real to you than boring Kansas.  Kansas is a lonely photograph, complete with sepia tone (which I love over the typical black and white), but Oz is the vibrant heart of a mystical world found only in your dreams.  As an adult, you’re able to notice the mastery of the set design.  The construction of the set feels obvious, and yet you wouldn’t mind walking around in it.  Judy Garland inhabits the liminal space between childhood without being childish.  I notice when a young adult is trying too hard to be a child, but Garland never makes you feel that.  It’s a class act, and no amount of description conveys how fantastic she is.

With that being said, let’s discuss some things.  First off, Dorothy should have died within the first twenty minutes!  When the twister comes (by the way, the movie Twister has put me in a bad habit of capitalizing the word ), knocking out Dorothy’s window and bonking her on the head, she should have died from blunt force trauma alone let alone traveling via a tornado in a house built of planks!  I blame Toto for all this.  I know he’s cute, but that dog is either a diabolical mastermind or the biggest douchebag in the world.  First, he bites Almira Gulch (Margaret Hamilton) and gets taken away.  He comes back, causing Dorothy to run away and run back home where she should have died in the aforementioned twister.  The dog gets stepped on and taken away at least eight more times forcing Dorothy to defend him.  Then, at the end, he jumps out of the hot air balloon so Dorothy has to stay in Oz!  I want a movie told from Toto’s perspective because this dog does not have Dorothy’s best interests at heart.

Going back to Dorothy landing in Oz itself.  I’m confused about the governmental structure of this city.  It’s revealed there are three witches (of the North, East, and West.  Guess they redistributed the South?) who all seem to control some undefined territory?  Or maybe they’re like Mafia enforcers who patrol various areas and threaten to move in on each others property?  (I guess then they’d be like modern-day gangs/drug cartels.)  If that’s the case wouldn’t Oz be in a constant state of civil war?  Glinda (Billie Burke) supposedly has a lot of power, and yet she refers Dorothy out to the Wizard whose power is grander than her’s.  So do the witches act as mayors then?  I’m wondering if Sam Raimi’s Oz the Great and Powerful answers any of these questions (Addendum: It doesn’t and it’s a terrible film not worth wasting your time with).  And why was the Witch of the East skulking around Munchkinland in the first place?  It’s obvious the Munchkins aren’t aware of her presence – unless we’re supposed to believe they were hiding from her.  And how stupid was the Witch of the East that she doesn’t see a massive house coming? Munchkinland looks as big as my house, so a full-size house plummeting from the sky shouldn’t be hard to miss.  Once Dorothy actually gets to the Emerald City we see all the one-percenters living the high life (who else could they be?).  As the song “The Very Old Land of Oz” says: “they get up at noon, get to work at one, take an hour for lunch, and at two they’re done!”  So does their economy run purely on the odd stranger allowed entry to have their hair primped? (Keep in mind, visitors have to get clearance from the guard.)  Is that why the Munchkins are terrorized daily, because they don’t make enough money? 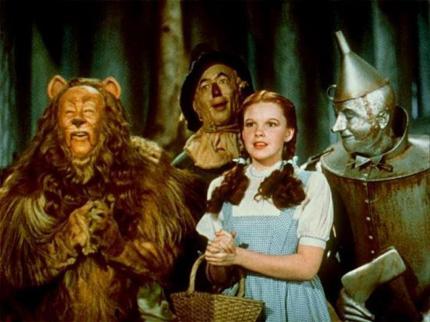 The actual ruby slippers are a pre-Hitchcock MacGuffin if ever I’ve seen one.  Other than getting Dorothy home they aren’t good for anything but being hip footwear.  They supposedly protect Dorothy from the Wicked Witch, but I don’t trust anything Glinda says (I’ll get to her in a minute).  Since the Witch doesn’t do anything violent to Dorothy herself we don’t get a chance to test that theory either way.  And the ruby slippers are either the best kept secret of Oz or everyone’s stupid.  Glinda says she doesn’t know why the Wicked Witch of the West wants them.  “They must be very powerful, or she wouldn’t them so bad.”  How does Glinda not know their power, yet she makes a point of reminding the Witch Dorothy has them on?!  Thanks a heap Glinda!  If you had kept your fat piehole shut Dorothy could have made it to Oz without any problems.  I think you wanted her to irritate the Witch both of them off your back!  “Hey Dorothy, this is the Wicked Witch of the West.  Oh, my God, look at Dorothy’s ruby slippers that were once your dead, rotting sister’s.  Aren’t they awesome?”   Gregory Maguire’s Wicked explains all this better than me.

This brings me to Glinda herself; the sadistic “Good” Witch of the North.  Not only does Glinda sic the Wicked Witch on Dorothy, she rubs salt in the wounds by telling Dorothy “the sooner you get out of Oz altogether, the safer you’ll sleep.”  She’d be sleeping fine if you hadn’t mentioned the damn shoes!  Or better yet, at any moment you could have told Dorothy “click your heels, say ‘there’s no place like home’ and I don’t have to look at your face!”  She tells Dorothy at the end “you wouldn’t have believed me.  She needed to learn it for herself” but I haven’t believed anything Glinda said since she mentioned she didn’t know the slipper’s power.  Two, what kind of logic is that?  I think Glinda wanted the Wicked Witch off her back after that whole dead sister thing, and used Dorothy as a scapegoat to get a paid vacation.  When Dorothy passes out in the poppy field Glinda doesn’t even show up!  She waves her wand from some magic bubble in the sky.  Again, she could have boomed out like the voice of God “click your damn heels.”  I think Dorothy would have been justified in telling Glinda “I was almost killed several times, my dog was threatened, I was roofied by poppies, and the Wizard is a fraud, and THE ENTIRE TIME THE SHINY FOOTWEAR WAS A ONE-WAY TICKET HOME.  Die!!!”  Dorothy’s killed before, she could have taken Glinda out for sure.  And that’s another thing; how many times can you “accidentally” kill people before you’re a plain old murderer?  The Wizard isn’t much help either.  He belittles education, and doesn’t give them diddly squat when you really think about it.

When it’s all said and done what’s the moral of The Wizard of Oz?  Live at home with your family until they die, of course!  After that trip to Oz you think Dorothy’s ever leaving home?  She says at the end she isn’t.  Dorothy probably lived with Aunt Em and Uncle Henry till they died, never married, never had kids, and probably turned into the female Norman Bates.  She probably laid in bed, next to their corpses, whispering “there’s no place like home.”  Thanks Hollywood, you made a sweet little girl a stark raving psycho.  Oh, and the movie also says you can survive a twister by just laying on your bed next to an open window.  And hey, how did Professor Marvel know where Dorothy lived?  Dude’s a creep!

Again, this review is written in jest.  I love The Wizard of Oz, but that doesn’t mean it can’t get a friendly ribbing.  Please don’t send me angry comments unless you’re aware I’m joking.

The Wizard of Oz

Buy It On Blu-Ray