Biopic Theater is back, and now on Fridays! I’m still gauging whether this will go weekly, bi-weekly, or do more of a “seasonal” feature wherein it runs for a couple months of the year, but for right now let’s just enjoy the fact I’m getting back into the biopic spirit!

What better family to kick off this triumphant return than those wacky Barrymores? The multi-generational acting family continues to flourish into 2015 with Drew Barrymore – whose the niece and granddaughter of the figures we’ll be discussing today – hosting TCM’s The Essentials. Too Much, Too Soon is based off Diana Barrymore’s salacious story of living with her father, John. A salacious tome turned into a salacious movie. That’s what we get with Too Much, Too Soon; a melodramatic recounting of the pitfalls of Hollywood that’s actually entertaining in its excess due to the hammy Errol Flynn, the seductive Dorothy Malone, and Ray “I’m a tennis player” Danton.

Diana Barrymore (Malone) is the neglected daughter of “The Great Profile” himself, John Barrymore (Flynn). She decides to move in with him but gets more than she bargained for when she discovers her father’s lifestyle isn’t all roses.

This may be the typical “small town girl sees the perils of Hollywood firsthand,” although it differs in the fact that Barrymore grew up privileged; a far cry from just an average Joe (or whatever the female equivalent is) being seduced by the glamour of stardom. We meet Diana when she’s about school-age, or at least that’s what the costume designers hope for, dressing Malone in a schoolgirl outfit as she looks every bit of the 33-years she was. There’s the mother/daughter argument about Diana being kept from her father, for reasons that make sense once the girl moves in, but none of that matters when the next scene sees Diana moving in with John, no questions asked.

Too much, too soon indeed! Events zip through at a breakneck speed in two hours. Diana moves in, there’s a montage of her going through the Hollywood machine and coming out as a cultured woman poised to be the new “exaltation” on par with her father and Lionel Barrymore. Fans of Errol Flynn take note: he’s only in the first hour and eight minutes of the film. In that time he spends the movie in varying states of drunkenness (not a stretch considering the actor’s personal life at the time). Flynn was the best choice for the role, being John Barrymore’s best friend; it’s rumored that Flynn and friends absconded with Barrymore’s corpse for a few hours as a joke. Because Malone never looks like a child, there’s little father/daughter chemistry between them. Once John decides to get back with Diana’s mother the tone of it all verges towards a romantic love triangle with Diana the irritated girlfriend watching her lover drink and carouse with other women.

This is the second biopic Malone’s been in; she was Lon Chaney’s wife in The Man of a Thousand Faces. Not as wacky or villainous as Marylee of Written on the Wind, Malone excels at playing camp. She’s not convincing as a child but neither was Joan Fontaine. When Diana matures into a woman, and once daddy is dead, the movie picks up and becomes the tale of a woman torn between the various states of Hollywood glamour (as embodied by the various men in her life). Efrem Zimbalist, Jr. plays first husband Vincent Bryan, a levelheaded man and father figure Diana sought upon moving to Hollywood. Her second husband is the colorfully reckless John Howard as played by Ray Danton of The George Raft Story. The script seems to believe audiences have short attention spans, introducing John, clad in tennis togs, as “I’m John Howard. I’m a tennis player.” Really, I’d have thought you were a doctor! This emphasis on tennis continues in several of Danton’s dialogue exchanges – when he’s not acting like he’s auditioning for Random Gangster #2 – and culminates with him serving Diana a tennis ball to the face. Game, set, match.

I make fun of Danton but, much like the rest of the film, there’s an air of humor (intentional or not is debatable) to everything. Dorothy Malone knows she’s in a potboiler – she did her fair share – and goes in whole hog. Her Diana Barrymore remains controlled in what she wants and the disappointment that the men in her life continue to let her down. It’s said that several actresses turned down the role for fear of being associated with a “nymphomaniac,” but I never saw that element; I saw a woman interested in sex, sure, but not to a detrimental degree. The movie is just wacky enough when necessary, but plays it straight and works through the stupid parts. 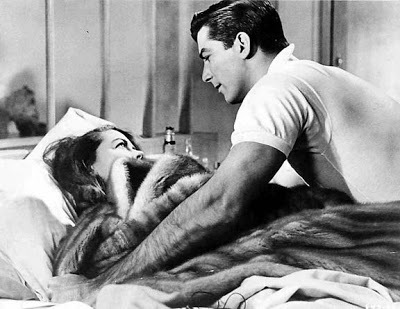 I was surprised that I remained entranced by the two hours of Too Much, Too Soon. Yes, it’s a typical melodramatic biopic, but it gives the melodrama necessary that keeps you hooked. Diana Barrymore wrote a soapy book that’s translated into a soapy movie, good enough for me.

Too Much, Too Soon