News in a nutshell: TCM may have their new Essentials co-host and they announce the opening night film at the TCM Film Festival, another classic film is prepped for the remake treatment, another classic television network is coming soon, and a lot of DVD/Blu-ray news.

Despite the fest moving up to the end of March, news has been a bit lax, with the last update happening in November. Well, the hills are alive…with the sound of thousands of classic film fans descending on Hollywood Blvd for the TCM Classic Film Festival because they’ve just announced their opening note film with be The Sound of Music. Considering the opening night film has been a musical for several years, and since Sound of Music is coming up on its 50th Anniversary, this was easily predicted by us fans. Regardless,it’s official and TCM also announced that Julie Andrews and Christopher Plummer will be in attendance opening night with Robert Osborne leading a Q&A after the film. If all goes well I’m hoping to secure red carpet credentials again, and if I get to spend any time with Andrews and Plummer you all will know about it! The festival runs from March 26th-29th this year and hopefully we’ll be hearing more titles announced shortly.

A fire blaze through the TCM fan community about who will be sitting in the chair across from Robert Osborne during the new season of The Essentials. Drew Barrymore is the current co-host and has been since 2012. With the announcement that she’d be leaving her post it was said the next co-host would be an Oscar winning woman over 40. Cue rumors of stars like Jane Fonda or Meryl Streep taking over the position. An Examiner article posted over the weekend announced that the co-host would be none other than Sally Field! TCM hasn’t confirmed or denied Field’s involvement, and there’s rumors that the new co-host will be unveiled at the TCM Classic Film Festival. In the last week or so, TCM has been dropping hints about the new host. I think Field is an inspired choice. She’s a darling woman from the interviews I’ve watched and she’s certainly worked with some heavy-hitters. Barrymore was a divisive figure in the position, so it’ll be interesting to see how easily Field, if she is the chosen one, will be accepted.

Actress/dancer/singer/general darling Debbie Reynolds will be honored with the SAG Lifetime Achievement Award this year, and TCM is showing a five-film marathon of Reynolds’ films in tribute. The tribute starts at 8pm ET and will include Reynolds’ iconic turns in Singin’ in the Rain and The Unsinkable Molly Brown, as well as her roles in The Catered Affair, The Mating Game, and Mary, Mary. The complete schedule for the day is available at the TCM website. Carrie Fisher, Reynolds’ daughter, will give her mother the Lifetime Achievement Award during the 21st Annual SAG Awards on January 25th at 8PM ET, simulcast on both TBS and TNT.

If Alfred Hitchcock is one of your sacred cows you won’t be happy with this news. Deadline reported that Ben Affleck, David Fincher, and author/screenwriter Gillian Flynn, the trio that created the Academy Award nominated Gone Girl this year, will be teaming again for a remake of Hitchcock’s 1951 thriller Strangers on a Train. The new film, simply entitled Strangers, will focus on “a movie star in the middle of a campaign for an Oscar during awards season whose private plane breaks down and is given a ride to LA on another plane by a wealthy stranger.” So the original premise seems to be removed entirely, and anyone else a bit turned off by the meta qualities? Affleck would be playing the Farley Granger role, and it’s unknown currently who will be the “wealthy stranger” offering to kill Affleck’s wife. Fincher will direct off Flynn’s script. I’m heavily turned off by this. Sure, Fincher is a master, but this sounds like they wanted the existing title to use for financial gain, and not for any reverence for the material. Strangers will film either late this year or early next year.

The spate of retro entertainment isn’t slowing down! After the successful debuts of GetTV, MeTV, and AntennaTV, three channels dedicated to classic television shows and movies, CBS and Weigel Broadcast Co. have announced Decades. Decades will show retro television shows as well as made-for-TV and theatrical films. Unlike the other networks above, Decades will try to stand out by interspersing real footage of historical and pop culture events with a television show called Through the Decades. Through the Decades will be hosted by Bill Kurtis and be “an original informational and entertainment series that will tap the resources of the CBS News and Entertainment Tonight archives to let viewers experience a different year or day, trend or event through the unique lens of Decades.” The show will air Monday-Friday and spotlight events from the 1950’s to 1990’s. Decades is preparing to launch sometime in the spring/summer of this year. The emphasis on made-for-TV content really intrigues me more than anything. Biopic Theater could certainly use the boost, and no network has tapped into showing the swath of made-for-television films that were produced between the 1960s-1980s, many of which haven’t aired in (pun intended) decades.

New on DVD and Blu-Ray

Warner Archive: Coming back from the post-holiday malaise, Warner Archive has a slew of different titles from different genres and eras starting with James Cagney and Joan Blondell in Sinners’ Holiday (1930) and Milton Berle in New Faces of 1937 (1937). The studio’s also debuting two collections with multiple titles in them: RKO Double Feature – containing Old Man Rhythm and To Beat the Band (both 1935), as well as The RKO Brown & Carney Comedy Collection that includes The Adventures of a Rookie, Rookies in Burma (1943), Girl Rush (1944), and Genius at Work (1946). If you’re a fan of 1960s movies WA is putting out All Neat in Black Stockings (1969), Panic Button (1963), and Kill or Cure (1962). All of these can be purchased, manufactured on-demand, at Warner Archive’s website. 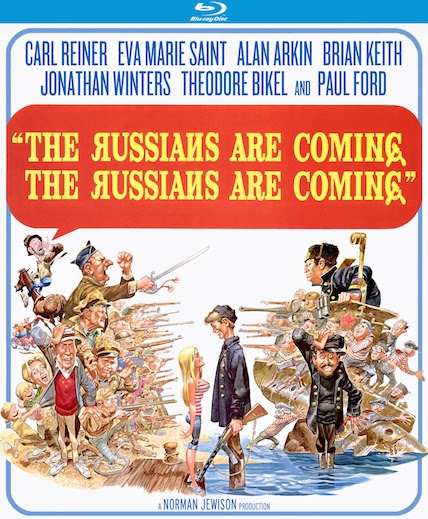 Kino: Kino’s new off-shoot label, KL Studio Classics, have announced their titles for February. Kicking things off on February 10th is Eva Marie Saint and Carl Reiner in The Russians Are Coming, The Russians Are Coming (1966). Bonus content: a making-of feature with director/producer Norman Jewison and the theatrical trailer. On February 17th you can purchase Cult of the Damned (1969) starring Jennifer Jones and Roddy McDowall which will contain additional audio commentary, a still gallery, and the trailer. Finally, on February 24th, you can own Jeff Chandler’s Ten Seconds to Hell (1959) which won’t have any additional content.

Shout! Factory: Robert Mitchum fans, Shout Factory will be debuting Thunder Road (1958) on Blu-ray and DVD April 7th, marking the first time this has been available in any format since 2000 when it was originally released by MGM.

Criterion: Criterion has plans to upgrade some of their existing DVDs to Blu-rays in April, starting with Preston Sturges’ Sullivan’s Travels (1941) and Carol Reed’s Odd Man Out (1947). This marks the first time both have been available to HD and their respective DVDs will also be getting upgraded picture and features if you don’t own a Blu-ray player. You can snag either title on April 14th. You KNOW I’ll be purchasing Sullivan’s Travels ASAP!

Olive Films: Olive is on a roll with the latest announcement that six more of their movies will come to DVD and Blu-ray – The Beat Generation (1959), John Ford: Dreaming the Quiet Man, The Quiet Gun (1957), The Shanghai Story (1961), The Stranger Affair of Uncle Harry (1945), and Stranger at My Door (1956). The John Ford documentary will be available March 31st, all the other titles hit shelves March 31st.

Mill Creek: Marlon Brando’s seminal biker film The Wild One (1953) premiers on Blu-ray March 17th. Currently this is strictly a Blu-ray release with no word on whether a new DVD will be put out.