Sullivan’s Travels has an entry in so many Best Of or Top Ten lists that to name them would be ridiculous. With such an aura of legend around it I expected a lot and it delivered!  Sullivan’s Travels furthered my love of Veronica Lake (who I grow to enjoy with every film) and convinced me to seek out the rest of Preston Sturges films.

Hollywood producer John Sullivan (Joel McCrea) dreams of making a serious picture about the common man.  With that goal in mind, he decides to live the life of a hobo and find out what poverty is truly like. Along the way he meets a failed actress known only as The Girl (Veronica Lake) who decides to join him in his quest. The duo find out the life of the poor is not all it’s cracked up to be and discover love as well.

I had shallow reasons for seeking this out.  It’s a classic everyone should see, but I was compelled by actress Veronica Lake. I adored her turn as the sly sorceress in I Married A Witch and wanted to see more of the girl with the peekaboo hair (although it saddens me hearing co-star McCrea hated working with her, as did several other co-stars). I’d also decided it was time to see a Preston Sturges film. Between him and Ernst Lubitsch, they’re the two names I keep hearing in the world of classic cinema. Oddly enough, Lake’s character dreams of meeting Lubitsch too, so it’s almost a “kill two birds” type of situation.

According to Robert Osborne, Sullivan’s Travels premiered just a few weeks after the US entered WWII. Talk about perfect timing! Sturges, who directed and wrote the screenplay, creates a satire discussing the role of art in attempting to make statements on politics, poverty and the like. How can Hollywood fat cats make films about human suffering when the entire industry is based on millions of dollars spent and earned? The Hollywood elite would do well to watch Sullivan’s Travels today, where the need to break out with a $100 million dollar opening weekend is the industry end all, be all. During the time of the film’s release, young men were dying and women were struggling to make ends meet, leaving Sullivan in a quandary. How does he make light comedy and evoke laughter when people are hurting (the film seems to be concerned with the Depression as opposed to the war outright)? The film does an expert job of blending the comedy with the knowledge that the US is in a dangerous situation.

The satire is sharp and shows not only the stupidity of the Hollywood executives but the duality of people in general. Sullivan wants to make serious pictures, but he’s constantly told to “include a little sex.” Sullivan says he knows it’s needed “but I don’t want to press it!” The studio tries to dissuade Sullivan from making his serious film (O Brother, Where Art Thou) by telling him people who see art pictures are Communists (a claim I’d expect to see made about films today). Again, it’s obvious Sturges has met executives like this. Art pictures today are generally relegated to small theaters, and those who go out of their way to see them are “hipsters” and the like. Wow, Sullivan’s Travels has aged really well!

Sullivan is obsessed with discovering the world of the common man. His motives aren’t malicious or meant to mock; he’s genuinely curious, and yet “people always like what they know nothing about.” As a character, Sullivan is like every new generation. He’s grown up not knowing hardship or raising a family on meager wages. Things like the Depression are stories old grandmothers tell that you never take seriously. What I find interesting is how this movie almost seems to attack earlier screwball comedies about poverty. The closest comparison being the 1936 film My Man Godfrey, a similar film about the rich discovering the hardships of the poor. The title character, played by William Powell, is later discovered to be a rich man. Numerous characters tell Sullivan that no one wants to see the truth about the poor, they want idealized images. When someone asks Sullivan what the point of The Girl is to his life he says “there’s always a girl” in these movies, returning to the love stories central to these films. Struges crafts a film, not only aware of its role as a screwball comedy, but that calls out other comedies for not going further with the message they’re presenting! I enjoy how the film uses every type of comedy, from its comedy of manners plot to the use of slapstick and verbal sparring. One of the funniest scenes has to be Sullivan attempting to lose his tail of reporters and publicity hounds following him in a bus. Speeding ahead of them in a car, the bus tosses and turns, leaving the poor chef in the back to get the brunt of the pain, complete with being slapped in the face with an oven door and having his head burst through the roof.

Once Sullivan loses the tail he ends up in a small town under the benevolence of two kind, albeit man-hungry, old ladies who take him to a movie theater where Sullivan doesn’t just get a taste for relying on the kindness of strangers, he learns a lesson in normality. He sits in a crowded theater with people chewing, babies crying, a scene far removed from the quite and expansive movie theaters of his studio. The man doesn’t just meet the common man, he becomes the common man, understanding life outside of Hollywood  and discovering what a small bubble it is. Sullivan’s life becomes a movie where he isn’t in control. Case in point, when he tries to escape from the old lady’s house, but she’s locked him inside to keep him there and the only open door leads to her room! The audience immediately return to the “include a little sex” comment because Sullivan definitely realizes this isn’t the sex the studios (or he) has in mind! This is my first Joel McCrea film and he’s a man of many talents. According to Robert Osborne, McCrea did every genre and he’s great here as the straight man opposite the crazy characters around him. I rooted for him to succeed in discovering the common man, and for him to realize that, ultimately, the story he wants to tell just isn’t right for him.

When Sullivan finally meets The Girl the true plot takes off, making you realize the poverty storyline is almost a MacGuffin masking the love story. The Girl takes a shine to Sullivan, offering to buy him breakfast when they meet. The producer sees the shattered dreams of Hollywood in the Girl’s eyes as she recounts her “audition” and meeting a lecherous casting director; Sullivan seems saddened by how tawdry the business is. The Girl recounts this story like a comedy film itself, with the coy voice and the questions she obviously knows the answer to. “Is that your hand on my knee?” She’s an actress and she knows how to act, but it’s obvious no one wants to hear her true thoughts. Veronica Lake is just darling in this movie, continuing to play a character walking the line between child-like innocence and sex kitten. In several cases throughout the film you believe she’s far more spoiled than Sullivan. Sure, she believes she can help him when she tells him “you [Sullivan] don’t know how to get a meal, you don’t know how to keep a secret, you can’t even get out of town” (that’s right, Sullivan ends up right back in Hollywood). The two end up on the road together but the Girl is whiny and irritating, pouting when she doesn’t get what she wants and constantly saying “I’m hungry” (well what’d you expect, you’re poor).

The relationship between her and Sullivan is one of mutual adoration; she needs him, attached to him like a little girl to her father. She wants to “go where you go” and doesn’t know anything else.  his little kid dynamic is helped by the physical fact McCrea was over six feet and Lake a little over four feet, so their height difference is emphasized. Lake is always sitting on McCrea’s lap and holding on to him or, like a petulant child, pushing him into his swimming pool (when the Girl is told to go back home she even asks, “Can I still come over and push you in the pool?”). On the other hand, Sullivan discovers honesty with the Girl. She tells him, truthfully, what she thinks about his work. When he mentions a movie she did like, she makes a point of saying she liked it despite it being “stupid.” They present a strong contrast in temperament and character that it’s hard believing the two didn’t get along. I want to give special mention to the scene where the Girl believes Sullivan is dead (a lot happens in between, so you’ll have to watch the film to find out why she thinks this). Veronica Lake sitting in a chair with a few tears coming out of her eyes is by far the most beautiful image I’ve seen.

A lot happens to Sullivan, for a 90 minute movie a lot happens period, but he finds a way to become the common man, ending up in a labor camp where no one knows him. He’s presented before a judge and the effect of hazy lighting mimics the nightmare sequences from the films of that decade. Sullivan ends up in a movie of his own, discovering exactly what he’s wanted to convey through cinema. He ends up seeing a Disney short, odd considering Disney was its own studio and this was an MGM film (although sold to Universal later on, Disney’s main competitor), and discovers that laughter is what helps people cope with the bad things in life. It’s been awhile since a film left me with a smile on my face, but I adored the message here; it’s not preachy, it’s not sickeningly sweet, it’s simply that in dark times we need a light at the end of the tunnel…we need a laugh.

Sullivan’s Travels is a film that’s aged extremely well. I had to hold myself back from comparing it alongside today’s film studios and mores which proves that it’s timeless. The acting is amazing, especially from the stunning Veronica Lake, and there’s so much packed into a 90-minute package.  Watch it, buy the Criterion Blu-Ray, just see it! 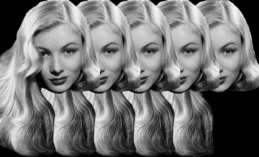 Leave a Reply to maroon5gurl88Cancel Reply