A bad film presentation is like ordering a crappy meal; you’ll consume it in the moment but wonder if you caught it on an off day…sadly, the experience ever prevents you from giving it a second chance. Watching Paulette Goddard in Kitty was just such an experience. Don’t get me wrong, Kitty’s convoluted storyline and characters were always going to disagree with me, but the downright awful transfer this received through Universal’s manufactured on-demand program gave me a canvas already tarnished.

Kitty (Goddard) is an 18th-century Cockney wench picking pockets to make ends meet. When she meets Sir Hugh Marcy (Ray Milland), a playboy with the airs of wealth but lacking the monetary authentication, Marcy believes he can turn Kitty into a society lady and thus swindle a wealthy man out of money. 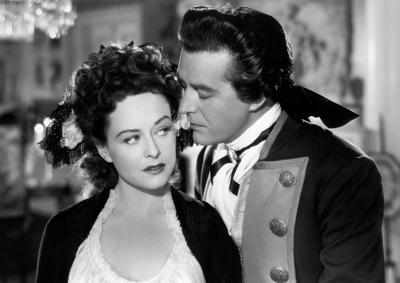 Loosely based on George Bernard Shaw’s Pygmalion, and by loose I mean the bare trappings of the plot are all that survives, Paulette Goddard’s Kitty quickly acclimates towards being a society lady. And by quickly, I mean she learns proper English and how to navigate all those forks in about ten minutes. Then again, when you have Ray Milland and Constance Collier giving you tips, you should be a fairly quick study. Of course, Hugh and Lady Susan have their own ideas in mind of how to use Kitty, and that’s by making her an object.

To expect a movie set in the 18th-century and filmed in 1945 (technically 1944 but released in ’45) to have some notion of how to treat a woman is ridiculous. I never expected Kitty to suddenly turn tail on a society that’s taught her her purpose for living is marriage. However, the narrative makes Kitty’s complicity in everything stupid. She’s an ignoramus by her blind devotion to doing whatever Hugh wants her to do, and in this case it’s marry a wealthy rival of his who will be humiliated when it’s revealed he’s married a guttersnipe. So, in essence, the plot boils down to Hugh being able to, metaphorically speaking, jump out from behind the curtain and say, “Gotcha!” to this guy. The fact that this doesn’t properly go down must be proof the script realized it was ridiculous.

Like Forever Amber (1947) and other similar costume dramas of the decade, Kitty revolves around the guttersnipe’s rise to social prominence through a series of failed romances. Through a benevolent paint, played by the affable Cecil Kellaway, Kitty catches the eye of Hugh and his friend, Brett Harwood (Patric Knowles) before eventually becoming the Duchess of Malmunster. In between Kitty has a child she passes off as her second husband’s when it’s really from her first. But this moment, much like other sequences which should yield suspense, are met with little more than a “meh” from everyone. When any slip-up should spell Kitty’s doom, it’s either laughed off by others or just ignored. The part with the child, especially, could have been the product of the Hays Code, but the fact that other moments, like Kitty’s husbands, begin and end with little fanfare, indicates a complete lack of risk on the script’s part.

There’s also little romance despite the obvious romantic intentions of putting an A-list star and A-list together, love’s gotta be the end result. In this case, Kitty’s love for Hugh extends as far as, “He taught me how to enunciate….I love him.” Kitty goes so far as to marry multiple men, birthing a child in the process, purely to hand over large sums of money to Hugh and Lady Susan to cover their debts. How is Kitty not just a prostitute paying her pimp? When she confesses her love to him at the film’s halfway, Hugh brushes her aside because he’s a jerk. It isn’t until Kitty finally breaks free and plans to marry Brett that Hugh sees the light. It’s a moment so obvious you expect a lightbulb to spark above Milland’s head. Everything about their romance is so contrived and quickly rushed.

Adding insult to injury is Hugh’s obvious controlling nature and disrespect for Kitty. He gives her a lengthy monologue about her being trash, then proceeds to finally bring her past up as a means of humiliating her and forcing Brett to dump her. According to Hugh, this revelation is meant to prove Brett’s love – if he dumps her, hey, at least Hugh’s there to “comfort” her – but it’s a means of control, a means of perpetually blackmailing and humiliating her, there’s no other way but to force society’s hand. However, this plan backfires from both a character perspective, as well as a narrative one. For starters, Brett proves he isn’t a total jerk by accepting Kitty as she is. Unfortunately, Kitty’s past should be a serious black cloud constantly looming over her. The consequences for rising above her station, the concept of penury, all of this should constantly worry her. Instead, it’s trotted out in this one scene to cap off the romance, it’s a mousetrap when it should be a black hole.

Apart from anything else, the actors are all solid. Paulette Goddard gives us her closest approximation of Scarlett O’Hara (or Eliza Doolittle) as the rising star, Kitty. Goddard is appropriately feisty and temperamental. When she tells Hugh, “We all three have titles, mine’s the best of all” you just want to wring your hands and say, “Burn!” The absence of more scenes like this are a disservice to Goddard who perfected the role of rebellious, modern-day women of the era. See her performance in So Proudly We Hail! (1943) to see what I mean. Her Cockney accent, though, should be taken out back and shot. It’s atrocious. I’m assuming Demi Moore used it as inspiration for making The Scarlet Letter in the 1990s. A lot of “‘ello guv’nors” in this one. Milland, Knowles, and the rest are all good, but Goddard makes a serious impression with her vacillations between scrappy tramp and refined woman with a secret.

All of this brings us back to my food analogy from the beginning. I wouldn’t have enjoyed Kitty any better on its own, but Universal’s transfer of this makes looking at this too closely a painful experience. I’ve been fortunate in watching other films from the various MOD programs, and I can’t say I’ve seen a transfer like this. There aren’t patchy moments or missing scenes, but the entire movie has a fuzzy quality, like you’re watching it with a bad eyeglasses prescription, especially in the opening credits where the fuzzy words can give you a headache. On top of that, the audio is muffled, especially when anyone with a Cockney accent is talking. Add in how rapidly Goddard and others spew their lines, and the first 20 minutes is nigh incomprehensible. Either the actors just couldn’t work with the accent or didn’t know where the mics are placed, because it isn’t until the actors slow down and talk normally that you hear clearer.

I doubt seeing or hearing clearer would make Kitty the perfect movie. The fact that much of my criticism surrounds the story proves this. But Universal shot themselves in the foot by not bothering to do some type of clean-up on this because it prevents you from continuing with the film at all. If you can trudge through the first 20-25 minutes, Kitty has some good set-ups for Paulette Goddard but a plotline uninterested in telling about our heroine and instead presenting a thin melodrama with little drama found.