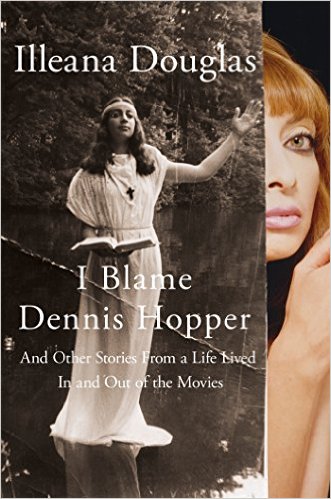 Actress, director, and friend of TCM Illeana Douglas describes herself – and has been described by others – as one both inside and outside of the movies. It’s a privileged position, to be sure, being both the granddaughter of one of the golden era’s stars (Melvyn Douglas), an actress in her own right, and someone who straight up appreciates cinema as a “delighted fan.” Reading her quasi-autobiography, I Blame Dennis Hopper, is an experience akin to sitting down with an old friend who just happens to have been a part of the world you’ve only dreamed about. I Blame Dennis Hopper recounts how the movies have shaped Douglas, but also spark conversations on who we “blame” for our own mad desires to consume cinema. (If I ever wrote my memoirs mine would be titled “I Blame Anna Chlumsky.”)

Douglas prefaces her book by stating it’s not a cut and dry autobiography, but more of a road map with the actress recounting various moments in her life that all go back to one catalyst: her father’s blind love for Dennis Hopper in Easy Rider (1969). It was Hopper’s character in the landmark sixties counterculture film that sparked Douglas’ father’s desire to start a commune, essentially taking the family from wealth and security, to chaos and struggle.

In a way, these moments connected with me, as my own mother has recounted semi-horror stories of her own hippie parents’ upbringing. In fact, Douglas’s later recounting of a close encounter with an unsavory character at a drive-in led my mother to say, “Yep, that could happen back then.” Many of these stories are chalked up to, “Hey, it was a different time,” and Douglas recounts them without a hint of pity or danger, but more of an off-hand demeanor, turning a scary possibility into a fun “thank goodness.”

There’s always a comedic edge to Douglas’s anecdotes – you can just hear her voice recounting the story of “Tom the Hippie” – but it is Douglas’s passion for movies, and the people in her life, that’s pervasive. She has as much love for talking about movies with someone (and maybe that someone just happens to be Martin Scorsese) or being a part of it herself. Her meetings with various titans of Hollywood, like Peter Sellers on the set of Being There, turn Douglas into just as much of a starstruck fan as the average TCM festival goer. Douglas also gives great life lessons, such as the knowledge you can get a lot accomplished if you have good boobs. Or, what I’m dubbing my personal mantra, “Always be yourself and always sing in the key of Liza [Minnelli].”

The most touching elements involve Douglas’s moments with her grandfather, actor Melvyn Douglas. As someone who had an equally close connection with their grandfather, these moments are what truly got to me. Her stories her grandfather’s race-car level driving, and her own dreams of him, will remind anyone of a close relative they’ve lost. It is this visceral connection to her prose that makes the book special, for as much as Douglas discusses how movies bind us together, it’s also our individual experiences that unify us just as much.

Of course, you can’t have a book written by Douglas without some Hollywood “who’s-who.” Douglas keeps things classy, never going too in-depth into personal experiences or critiques. Her relationship with Martin Scorsese isn’t presented as a drawn-out romance but more of a close connection between two people who just enjoyed talking about movies and happened to start dating. Their relationship remains respectfully private, although there are glimpses of their dynamic when Douglas recounts meeting Marlon Brando with Scorsese. Scorsese’s constant refrain, “Be good” to Douglas only causes her to become more flustered around Brando, though. She also recounts her time with actor Roddy McDowall, who, from her stories, must have been a hoot. (Not sure if I’m right, but did he imply Grace Kelly was a little less than pure?)

I Blame Dennis Hopper presents Douglas as most people have come to know her from films and television, as a quirky innovator with a style all her own. I’ve been fortunate to meet Douglas twice, and having read her book and learning about her own moments of being starstruck, I hope I won’t be as geeky if we ever meet again.

I Blame Dennis Hopper: And Other Stories from a Life Lived In and Out of the Movies

I Blame Dennis Hopper: And Other Stories from a Life Lived In and Out of the Movies

3 thoughts on “I Blame Dennis Hopper” Leave a comment ›