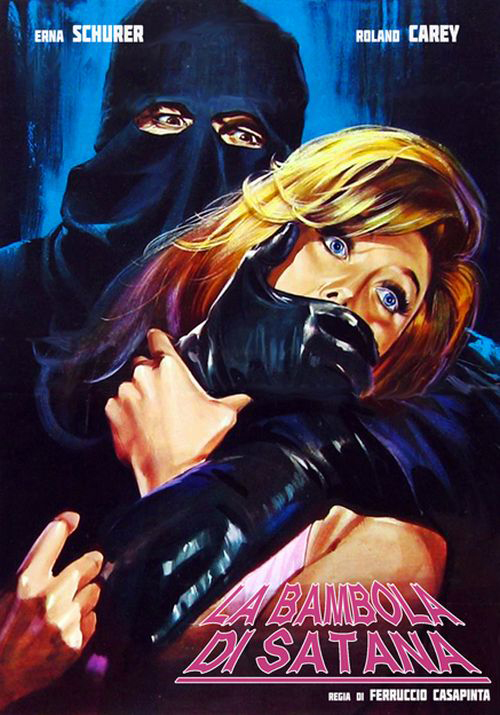 Twilight Time, long the company providing beautiful Blu-ray transfers of oft-neglected titles, enters the giallo business with La Bambola di Satana or The Doll of Satan. Unlike the giallo work of luminaries like Mario Bava, The Doll of Satan is helmed by first (and last) time director Ferruccio Casapinta, with a production as wacky and sloppy as the finished product.

A young woman named Elizabeth (Erna Schurer) travels to an old ancestral estate for the will reading of her deceased uncle. Several people offer to buy the castle but Elizabeth refuses to sell leading to a series of supernatural events that may drive her insane.

You have to give Twilight Time credit for how utterly beautiful The Doll of Satan (I’m gonna use the English title from here on out) is! The blood red opening credits give off far more of the red stuff than the rest of the film, but the colors pop and set up a movie that doesn’t have the grit of other giallos out there. This is easily on par with the work Kino did on their Bava films.

Casapinta is credited for writing the script and liberally borrows from the Gothic horror trend commonly seen throughout the 1940s. Our young heroine travels a dark and creepy castle filled with motivated strangers to read the will of an unknown relative almost immediately conjured up images of The Ghost Breakers (1940).

Like other foreign horror films there’s an overt lack of subtlety with smash close-ups to people’s faces played on top of ominous music, giving us either villains or red herrings. Because Casapinta was a lax, if not absent entirely, director and screenwriter the film is ripped between being a Gothic ghost story/murder mystery and a New Wave blood bath. For every moment with Elizabeth and her lusty dreams – reminiscent of Hammer films – we’re treated to swinging hep cats dancing down at the local pub. Dark, murderous, and swinging give us a goulash of different themes and though the whole thing doesn’t go down smooth, it’s enjoyable in how unpredictable it is.

Allegedly Casapinta dreamed of making a movie….just not directing a movie, leaving everything to the first assistant director, explaining why the tonal shifts are pulled from thin air; they probably were pulled out of thin air! There’s not nearly enough mystery for a Gothic film, yet this is a pretty tame bloodbath – limited budget, I’m assuming – so the burgeoning youth of the ’70s had to be left cold.

I’m excited to see where a few more titles released from Twilight Time. Since I remain a novice when it comes to giallo Twilight Time looks to be opening the door to new stuff I’ve never heard of. If you’re a fan of the genre The Doll of Satan is a bizarre combination of Gothic and slasher in the hopes of appeasing both audiences. You probably won’t get a better presentation of this unknown film than what’s out right now.