I’m afraid to say it but 31 Days of Oscar isn’t my favorite TCM theme, mainly because I’ve watched so many of the films they screen so there’s little room for new discoveries. But, no matter, because I still found ten films I’m eager to give a looksee in this short month. The theme of this year’s 31 Days of Oscar is “From A to Z” so let’s look at what the alphabet yields up for us this month. Feel free to offer more suggestions in the comments!

**Times listed as Eastern. TCM can change the schedule at their discretion.** 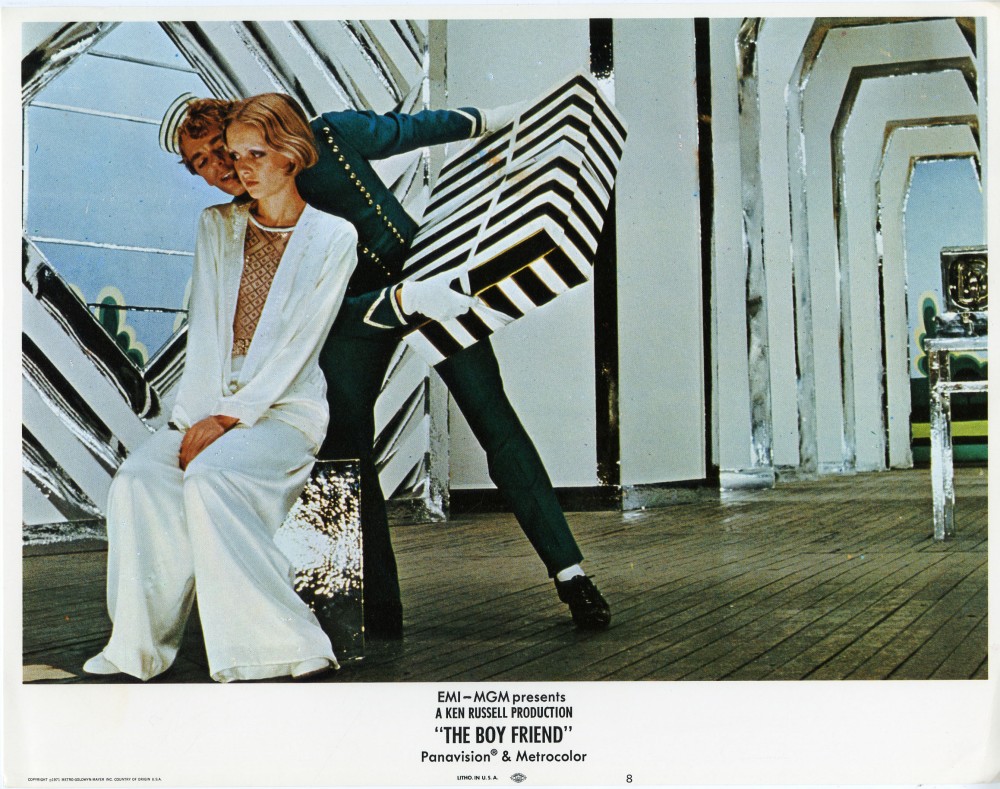 You might remember the last time I reviewed a Ken Russell film, the intentionally garish biopic of Valentino (1977). The Boy Friend (1971) sees Russell return to the Hollywood of yesteryear with fashion model Twiggy playing an understudy who goes on in place of a star. I’m assuming the typical rise and fall storyline plays out from there. I had no idea Twiggy transitioned from the runway to the film screen but if anyone can draw a performance from the unexpected performer it’s Russell. This is actually set to be released on Blu from Warner Archive and if they see merit in it, it must be worth it. The Boy Friend airs February 4th at 2pm.

How did I just discover Hedy Lamarr and Clark Gable made a movie together? I mean, are there two more perfect stars in the universe to pair together? Comrade X (1940) is described as Ninotchka-esque (1939). Lamarr plays a Russian streetcar conductor who falls for the brash, American Clark Gable. Clark Gable might not be at his pre-Code sexual peak, but there’s nothing wrong with him trying to melt the stony heart of a beautiful Russian. Especially when said Russian is as incomparable as Ms. Lamarr. I can only imagine her accent. Meet Comrade X on February 6th at 5am.

Considering my adoration of the musical genre, I don’t automatically watch all the modern musicals. I remember when Dreamgirls (2006) came out, right around the time I graduated high school. I was a Broadway fan, but not the aficionado I am now, so I didn’t understand the impact the show had on the stage. Based loosely on the Supremes, Dreamgirls tells of the rise of a girl group and how fame tears them apart. It’s funny that I included this before Beyonce announced her new pregnancy, so consider this ultra timely. I also need to hear “And I Am Telling You” in context. Meet your Dreamgirls on February 7th at 8pm.

I’m not big on race cars in general, but how can you turn down James Garner in a racing jumpsuit AND fast cars? Grand Prix (1966) was the other ’60s auto racing movie next to Steve McQueen’s Le Mans – the story of the film’s rivalry is discussed in the fascinating documentary Steve McQueen: The Man and Le Mans. Garner’s version includes the likes of Eva Marie Saint, Yves Montand and Jessica Walter (Gangee for all you Arrested Development fans out there!). I’m sure the whole affair will be gaudy and slick. Garner said he was inspired to get further into car racing cause of this film. Did I mention I’ll give anything with James Garner a fair shake? Grand Prix airs February 10th at 4:45pm.

Speaking of actors I’ll give a look at all the time, let’s talk about Jennifer Jones. She gets a real bad wrap in classic film communities, some deserved and some undeserved. She had plenty of clunkers but I can never truly fault her because she’s spellbinding in The Song of Bernadette (1943). Before this piece I’d never heard of Indiscretions of an American Wife (1954) but you gotta give time to a movie starring Jones and Montgomery Clift, directed by Vittorio De Sica. The film follows Jones, the “American Wife” of the title, trying to break off a romance with her Italian lover. I’m intrigued to see how the Italian neorealist director fares with a Hollywood picture. And I can only imagine how Jones and Clift play in De Sica’s sandbox. Indiscretion of an American Wife airs February 13th at 5pm.

The greatest concentration of films I’ve never heard of tend to crop up during 31 Days of Oscar. Look for the Silver Lining (1949) is the Hollywood take on the life of actress Marilyn Miller (here played by June Haver) who was said to have inspired the name for Marilyn Monroe. The cast and director are all B-level and I’m sure this won’t go into the nitty gritty of Miller’s life. If anything this makes for a great Biopic Theater entry. You can Look for the Silver Lining on February 15th at 4:15pm. 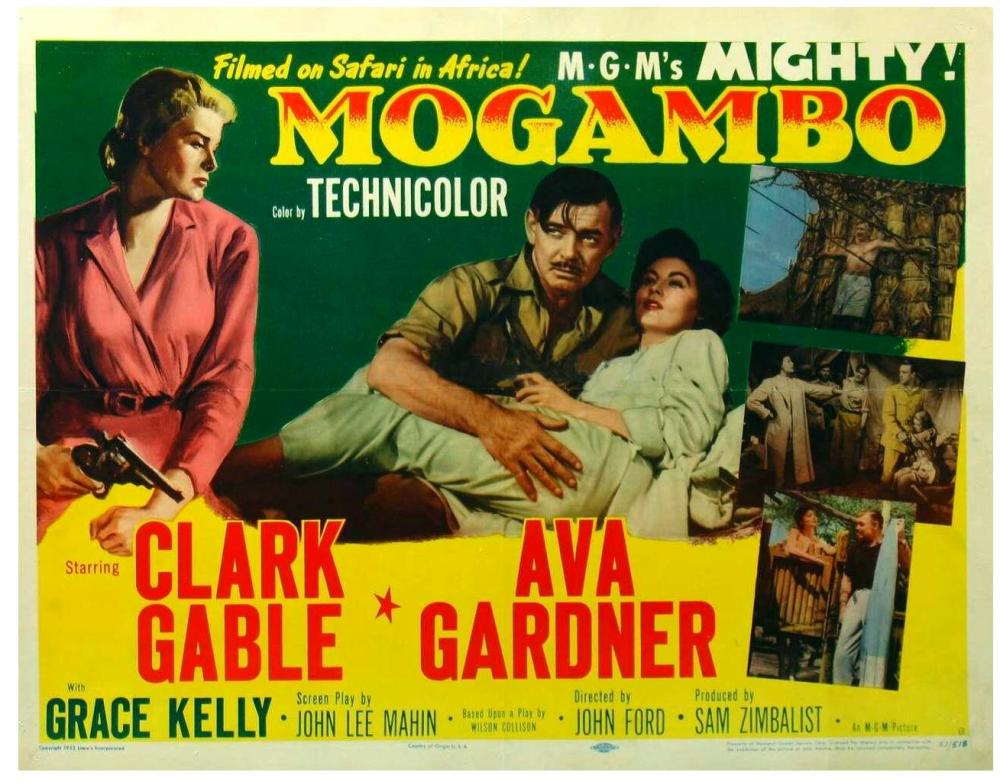 I swear I had Mogambo (1953) on a previous list. There’s always one! Mogambo is the John Ford remake of my favorite pre-Code, Red Dust (1932). Clark Gable reprises his role from the previous film, playing a rubber plantation owner who falls for a showgirl (replacing Jean Harlow’s prostitute character) and his boss’ wife. Ava Gardner and Grace Kelly co-star and you can guess which characters they play. For obvious reasons this version is considered chaste despite the subject matter, and it’s doubtful I’ll fall in love as deeply as I did its predecessor, but (as I keep saying) you can’t deny that cast! Visit Mogambo on February 18th at 12:15am.

Can you ever go wrong with Jane Powell? Sure, her movies always see her as the wide-eyed girl who travels to a foreign locale for love, but the pure joy she evinces makes me as happy as those who love Shirley Temple. Rich, Young and Pretty (1951) doesn’t sound like it has the strongest premise. I mean, it’s in the title. Powell stars as a rancher’s daughter who travels to Paris. You can play Mad Libs with the plot but Powell is too cute to resist. Rich, Young and Pretty airs February 22nd at 9:15am. 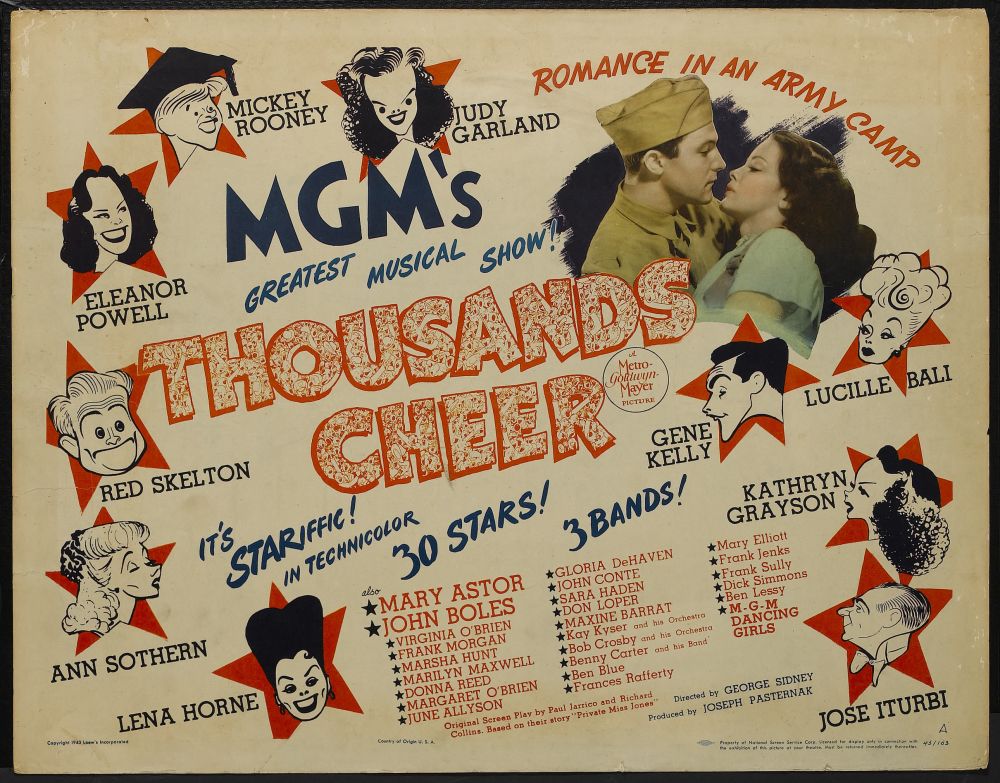 Thousands Cheer (1943) is considered a USO show with a thin veneer of a plot. Gene Kelly plays an acrobat who joins the Army and woos his commander’s daughter, played by Kathryn Grayson. Wow, that’s a pretty weird plot. Regardless, the film’s USO finale boasts a who’s who of celebs including Lucille Ball, Judy Garland and Red Skelton. You can learn why Thousands Cheer on February 27th at 4:15am.

After watching the lovely Livvie de Havilland in Hold Back the Dawn, I’m surprised at how many movies of hers there are that I’ve yet to see. Like a few others on this list, I hadn’t heard of To Each His Own (1946) before. The film is a domestic drama about a single mother who gives up custody of her son but hopes to maintain a relationship. I’m always fascinated by how the studio era loved to look at custody disputes and de Havilland is great at playing average women thrust into realistic situations. The film also stars Mary Anderson and Roland Culver, and is directed by her Hold Back director Mitchell Leisen. To Each His Own airs February 27th at 10pm.

TCM gets classy on February 12th with a trio of swoony titles. Olivia de Havilland has a lot of money but man problems in The Heiress (1949) at 8:30am. Then, Grace Kelly and Bing Crosby hope lightning strikes twice in High Society (1956) at 10:30am. And later de Havilland returns, this time opposite Charles Boyer in this romantic melodrama about an immigrant marrying for a green card, Hold Back the Dawn (1941) at 12:30pm.