Since the Bard wrote it out way back when, Hollywood has loved a good Romeo and Juliet story. The illicit romance between King Henry VIII’s sister Mary Tudor and her relationship with Charles Brandon didn’t directly inspire Shakespeare, but the dream makers of Hollywood have always played it that way, leading to some techniques that leave me – a big Tudorphile – rolling their eyes. Marion Davies epic period drama, When Knighthood Was in Flower, draws on many of the stereotypical devices we often see in Mary Tudor/Brandon stories, but what it fails historically it more than makes up for in ambition. The first million-dollar film, When Knighthood Was in Flower is a fun showcase for its leading lady, an overwhelming look at the willpower of early filmmakers, and one of the best film restorations available on Blu-ray.

Mary Tudor (Davies) is the willful younger sister of King Henry VIII (Lyn Harding). Mary refuses to marry the elderly King of France, both because of his advanced age and because she’s fallen for the commoner Charles Brandon (Forest Stanley). The two’s forbidden romance is soon discovered by the King, putting the young couple in grave danger.

The historical inaccuracies won’t bother anyone not named Kristen, and really one should never expect a movie to get history right. The problem is with the intention of why certain changes are made, and When Knighthood Was in Flower does everything that Disney’s The Sword and the Rose (1953) does with this story. The key change that always bothers me is how Brandon is just some random guy that pops into town and attracts the eye of Mary who gets him a space at court. I’m all for giving Mary the agency in this case, promoting Brandon to draw him closer to her, but it negates the years of friendship Brandon and Henry had. The two were friends well before this; their friendship was very temperamental with Henry exiling and returning Brandon to court numerous times before and after the latter’s relationship with Mary. Also, there’s no proof that Mary dressed as a boy and ran off with Brandon. In fact, their relationship didn’t even begin until they started traveling to France – Brandon was the chaperone meant to deliver the new bride to her groom. It’s understandable why these moments were changed, to heighten the spontaneous and all-consuming love between the pair, but it always bothers me.

With that being said, When Knighthood Was in Flower makes every effort to chart the Mary and Brandon relationship from beginning to end; from first fleeting glance to their final reconciliation. A near-two hour silent film can feel like a slog, particularly as the film doesn’t mire itself with intertitles, but it provides a serious arc for its characters. These two aren’t just star-crossed lovers but partners. When they go on the lam from Henry and his guards Mary and Charles end up in a local pub. Mary, hiding her femininity, is drawn into a sword fight that she starts, dragging Charles into the fray. Each has a certain strength – Mary’s tenacity and her pedigree, Charles has agility – that compliments each other. Davies and Stanley have a solid chemistry though it is difficult to buy that these two are destined for each other. In actuality Davies has more of a connection with a young William Powell – billed as William H. Powell, to be exact – as the villainous Francis I; all he’s missing the mustache to complete the evil look. 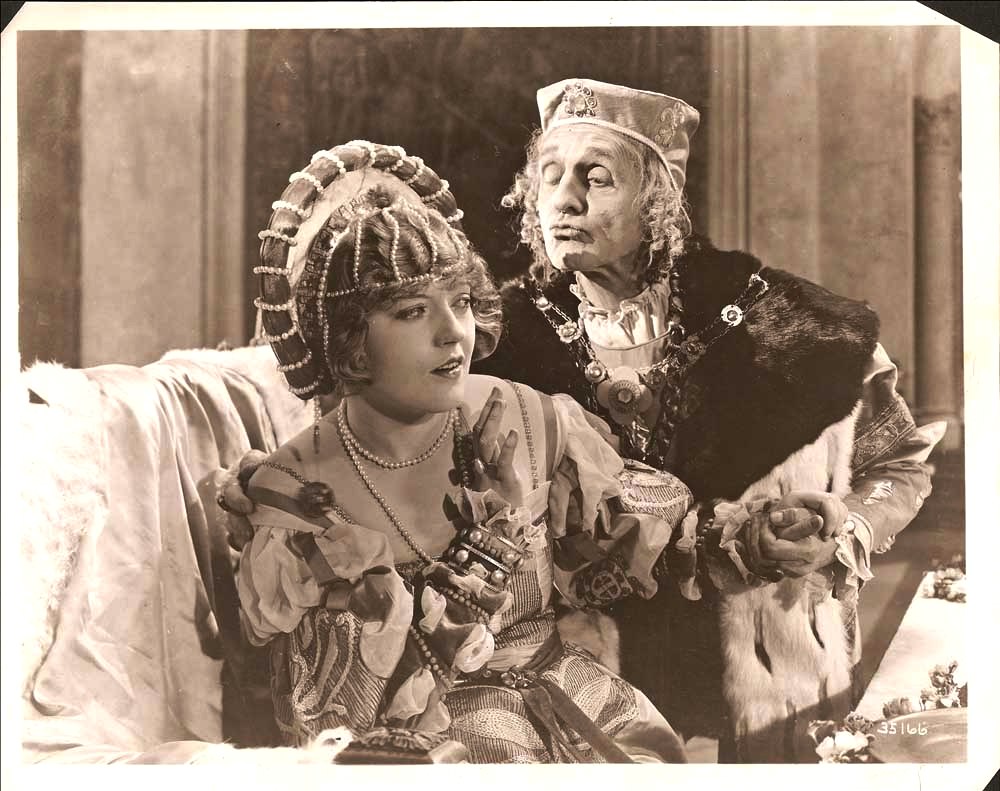 Stanley, Powell and Harding are all perfunctory. (Harding, especially, looks eerily like Henry but plays more like a jolly buffoon than a powerful King.) Really, this is a showcase for Davies whose paramour, the Henry the VIII-esque William Randolph Hearst, funded the picture. Davies’ Mary Tudor is headstrong and vivacious; she refuses to capitulate to her brother’s whims and be treated like an object. For 1922 she’s got all the power of a 2017 heroine, mostly. For all her seriousness, Davies’ Mary knows when to make fun. She lampoons the garish marriage ritual of messengers offering her jewelry. Later, to make her brother uncomfortable, she acts like she’s nude in bed, wiggling her bare toes and showing an exposed back to elevate her brother’s cries of “Hussy!”

Davies is complimented by some of the most expensive antiques and costuming in a production of the time. Despite the inaccuracies of the story, all the antiques in the film were either of the Tudor era or replicated, and all of Davies’ costumes were based on real Mary Tudor outfits. Davies’ acting does feel modern by 1922 standards, which does leave her like a flapper auditioning for a school play, but the authenticity is gorgeous. It’s aided by Ben Model’s hand-tinting on the film’s new Blu-ray release, providing a sparkling intensity to every scene.

When Knighthood Was in Flower is for die-hard Davies fans, or fans of Tudor dramas. The attention to detail and Davies’ infectious charisma help a story that does feel stagy because of the time period.

Summer Under the Stars, TCM

Ticklish Business When Knighthood Was in Flower (1922)
Loading Comments...