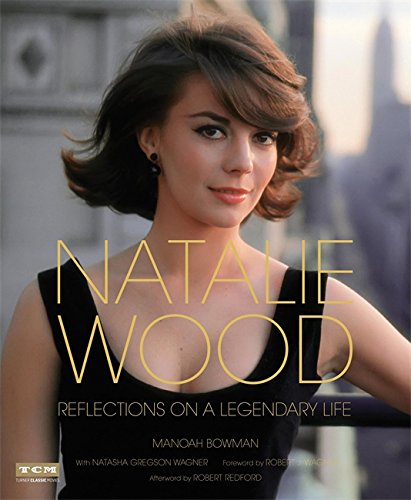 Natalie Wood was like looking at the sun. Just staring at her in photographs the luminosity burns out of her. Her daughter Natasha has described her as tough when necessary, but always present and loving. It’s often easy to overshadow Wood’s life and career in the wake of her tragic death at the age of 43 but it’s why a book like Natalie Wood: Reflections on a Legendary Life is so vital. This gorgeously rendered book combines biography, scrapbook, recollections and movie analysis into a book rich in life, the life of Natalie Wood. The more accomplished Wood fan probably won’t learn much that they haven’t already, but looking at the drop-dead gorgeous images are more than enough to make this a blind buy for any fan of the star.

More of a memory book than a proper biography, Manoah Bowman’s book starts out with essays and discussions about Wood’s place in history, and how she’s often ignored in the grander discourse for how long she worked and the types of films she made. This is why so much of Reflections on a Legendary Life is composed of analyzing every single Wood film, recontextualizing them and discussing why Wood found merit in every film she made. Some, like West Side Story (1961) and Splendor in the Grass (1961), are discussed at length for how they formed Wood’s persona and cemented her status as a star. Though they’re the films you’d expect a book like this to spend time on every film is reviewed with respect, even a silly crime drama like A Cry in the Night (1956), which Natalie was disappointed didn’t do more for her career. In reading each review, several of which were about films I’d never seen myself, Natalie’s career is presented with all its highs and lows. Some works, like Penelope (1966) or This Property is Condemned (1966), were hoped to show off Wood’s acting skills, and their failure hurt her spirit. The section on Inside Daisy Clover (1965) is particularly bittersweet as the character was already so much like Wood and the film’s failure felt like a slight against her person.

But unlike the more generic approach of looking at Wood through film or third-party remembrances, Reflections on a Legendary Life revolves around the intimate and private. Utilizing Natalie’s own scrapbooks the book includes rare photos of Natalie as a little girl with her family, as an adult with her children, on vacations, and on set. Wood was notorious for keeping everything and there are telegrams from directors, photos of paintings of her, even looks at her private dressing room and house. The best feature is an unpublished essay Wood herself wrote discussing her life in the limelight. It’s a melancholy, authentic essay about the pitfalls of fame, elaborating on her personal loneliness as a child and her inability to connect with her family due to being the breadwinner. It’s the closest we’ll ever come to Natalie penning her own memories. Alongside Wood’s words are photos from her daughter Courtney and a beautiful essay from her daughter Natasha. The latter’s words are by far the most poignant, detailing a side of Wood we often forget: mother. There’s a sweet story about Natasha going to camp for the first time and her mother’s aggressive badgering of the counselor to allow her to call Natasha every evening. It’s these small personal touches that are used to gorgeous effects and really do reflect on the legendary life that is Natalie Wood’s.

I didn’t even mention the exquisite and personal photos that accompany the book. I mean, I discussed them above but I can’t stress how amazing they are. First off, I’m fairly certain finding a bad photo of Wood is a lesson in futility. Even when she’s just taking a regular photo she’s a goddess. What’s unique is watching her change her image throughout the decades in her personal photos. In her later years she’d make the attempt to take sexier poses, even doing a tasteful nude photo at one point that’s breathtaking. Her childhood photos showcase her as one of the most beautiful babies ever, and her moments captured on camera with her daughters are the best treasures.

Natalie Wood: Reflections on a Legendary Life isn’t an expose, nor does it really feature information you can’t find. What’s new and worth reading is how Wood perceived herself and the perceptions of those she influenced, including her husband, children and co-stars. This is a loving remembrance for both fans and family.