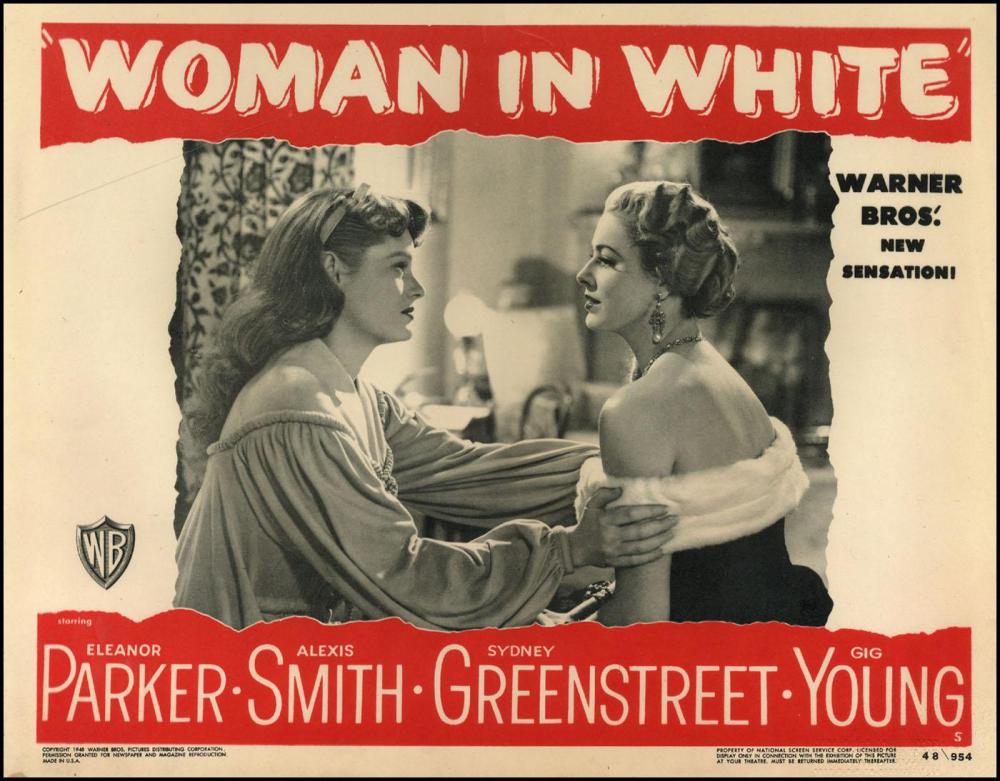 In 1859 author Wilkie Collins published The Woman in White, considered the first mystery novel with an actual detective-esque structure. Imitated in numerous films since, from serious drama to animated films like Tim Burton’s The Corpse Bride, The Woman in White remains a thoroughly engrossing story that studio era Hollywood had to adapt. With its turn of the century publication the lack of any discerning sex or extreme violence suited it perfectly as a costume drama, particularly in light of other successful adaptations like Wuthering Heights (1939). Newly released on DVD via Warner Archive, The Woman in White is somewhat faithful to Collins’ text – though the changes serve no true purpose – but situates itself as a true women’s murder club.

A young painter (Gig Young) discovers a beautiful woman in white (Eleanor Parker) on the road to his new post. When he learns the woman is an escapee from a mental hospital the young man is understandably concerned. But what he doesn’t know is the multiple intrigues involving this titular “woman in white” and her connections to an heiress (also Parker) and the heiress’ best friend (Alexis Smith). 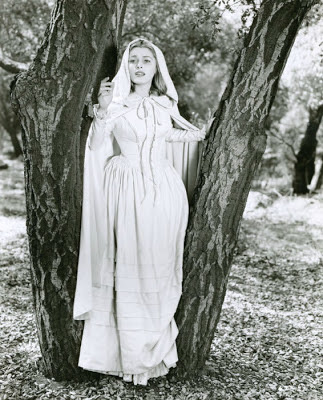 Collins’ text is required reading in almost any college-level English class, so I’ve read it more than once. Collins’ epistolary style allowed for multiple narratives, so the reader was parceled out information that only certain characters would be privy to. With the characters limited to specific information the mystery becomes truly suspenseful. You, like the characters, are discovering the mystery in real time (or as long as it takes you to read the text). Suffice it to say letter-writing would not a good narrative device make. (I’m assuming, were it implemented, it’d be the Star Wars scroll for 90 minutes.)

This interpretation of The Woman in White condenses quite a great deal and outright changes the ending. As a literary major, I was peeved but if you’ve never read the novel it’s doubtful this issues will bother you. On its own merits The Woman in White is a well-acted 1940s literary adaptation in a decade full of them – Pride and Prejudice (1940), The Heiress (1948) and Dragonwyck (1946) are some of the more prominent examples. All of these adaptations opened the door to sumptuous set design, and even grander costumes, compliments of Milo Anderson, who dressed Smith, and Bernard Newman.

Taking into consideration the fact that The Woman in White is a mystery, this version does a good job of condensing the basic elements of the story into a nifty hour-and-fifty-minutes. We’re first introduced to Gig Young’s Walter Hartright, an idealistic painter sent to teach drawing to the beautiful Laura Fairlie. He meets the eponymous woman in white and, like an angelic white MacGuffin, we’re off to the races.

Director Peter Godfrey worked with Alexis Smith in the equally thrilling The Two Mrs. Carrolls (1947), but is probably best remembered as helmer of the Christmas classic Christmas in Connecticut (1945). Though lacking in the thrills and chills of other Victorian suspense novels, the mystery keeps you anchored. Who is this woman in white? And why does she look so much like Laura? The answers aren’t always satisfying, but the actors perpetuate the idea that Limmeridge House holds many secrets. 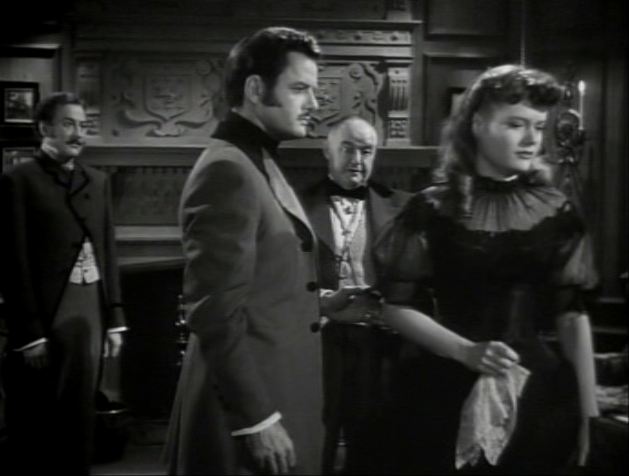 Despite the presence of Gig Young – who ends up living happily ever after with a woman he was flirting with and the woman he ends up with by default – and Sydney Greenstreet, The Woman in White belongs to, well, the women. Alexis Smith is our Sherlock Holmes as Laura’s friend. I’ve previously watched Smith play cold glamour girls, and with her brown hair and homelier garb she gets a chance to present herself as a serious sleuth. Also stirring the pot is Endora herself, Agnes Moorehead as the Countess Fosco (I love the character names in this one!). Moorehead’s propensity for dour expressions is the film’s true mystery because you’re unclear whether she’s an ally or villain. The dueling Eleanor Parkers are two versions of the Victorian “angel of the house,” so both performances require her to be sweet and demure which, if you’ve only watched Parker as the Baroness in The Sound of Music (1965), she’s capable of pulling off.

The way the women all work together to undermine their male oppressors remains the central conceit of Collins’ text, if only slightly so in the film. When Walter leaves Limmeridge and Marian starts investigating Laura’s marriage to Sir Percival Glyde (John Emery) it becomes a thoroughly engaging mystery. Countess Fosco and Marian team up to save the beleaguered Anne Catherick (the woman in white) as well as Laura from being what all women were in Victorian times: pawns in the marriage market. Walter taking over the ending for our “happily ever after” is a taste disingenuous, but understandable considering the Hollywood veneer at the time.f

The Woman in White is another in a solid string of 1940s literary adaptations. Alexis Smith, Eleanor Parker and Agnes Moorehead are more than enough to garner attention even if Collins’ text isn’t followed to the letter. 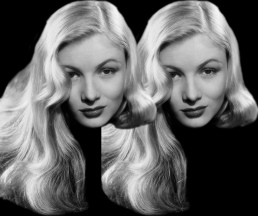 Leave a Reply to dbmoviesblogCancel Reply