In the town of Tarl everyone is chasing something: sex, love, money, admiration. Coming out in the midst of the ’60s, The Chase marked the transition between the generations as well as the transformation of Hollywood itself as the ’70s rolled around. Panned at the time, even by its own director, Arthur Penn, and usually held up against Penn’s other decade-defining feature, Bonnie and Clyde (1967), The Chase is a thought-provoking elegy to the death of small-town America, both as a symbol of normality and the fantasy it could never live up to.

The town of Tarl is “nice but dull,” which explains why all the residents fill their days with vice, hiding secrets that have bubbled under the surface for decades. When maligned prisoner Bubber Reeves (Robert Redford) escapes from prison the residents all have their own reasons to call their behavior into question. What unfolds over one night is a cavalcade of horrors that leads to death, redemption, and revelation.

There’s so much to deconstruct with this film, so if you purchase the new Blu-ray from Twilight Time be sure to read Julie Kirgo’s phenomenal essay that lays out all the cultural touchstones the film connects to. On the surface, The Chase is a political melodrama, blending facets of the then-current zeitgeist with the steamy soap opera world best exemplified in films like Peyton Place (1957). A series of intertwining stories unfold, surrounded by the catalyst of Bubber Reeves’ escape from prison.

Robert Redford, in his fourth major film role, plays the golden-haired Bubber. He’s a victim of circumstance, labeled trouble due to facets that usually boil down to wrong place at the wrong time. His escape from prison starts off on a bad omen, with his partner in crime killing a man in order to get a car. This murder will lead to Bubber’s eventual condemnation by the Tarl townsfolk, who take it as proof that he’s returning with revenge on his mind. But in fact Bubber isn’t interested in returning home. He wants to start a new life in Mexico, but as if pulled by fate he ends up on the train bound for the place he’s hoping to escape; “you’re going home,” he mournfully declares. And it is in going home that Bubber is forced to confront his own demons, particularly his relationship with Anna (Jane Fonda, in the first of four films she’s star in opposite Redford). Bubber is the harbinger of doom, but specifically in the sense that he forces the other residents to bring up their own guilt. Make no mistake, their hands are far dirtier than Bubber’s, they’re just better at hiding it.

Despite being called “the chase,” there’s little chasing to be had from Bubber Reeves. The real chase happens amongst the citizens of Tarl. There’s Sheriff Calder (Marlon Brando) and his attempts to become his own man. The citizens believe he’s in the pocket of town millionaire Val Rogers (E.G. Marshall) and Calder vacillates between wanting to leave everything behind and try to fix the town from the inside out. This was Brando’s big film in the late ’60s and he still has that spark, even if his movie star good looks are fading. He’s decisive yet fair, and his goal to bring Bubber in safely is admirable. He’s the purest soul in the bunch, yet he can’t felt but feel inadequate. When his wife, Ruby (Angie Dickinson) sports an expensive dress Val bought her Calder demands she wear something he bought. When the town slowly starts to unravel, he is the one beaten up by a group of town good old boys, but he refuses to stop doing his duty. When the film comes to its melancholy conclusion Calder is just one of a string of losers, not in the sense that he’s inept, but that he’s tried so hard and still had to sacrifice a piece of his soul. 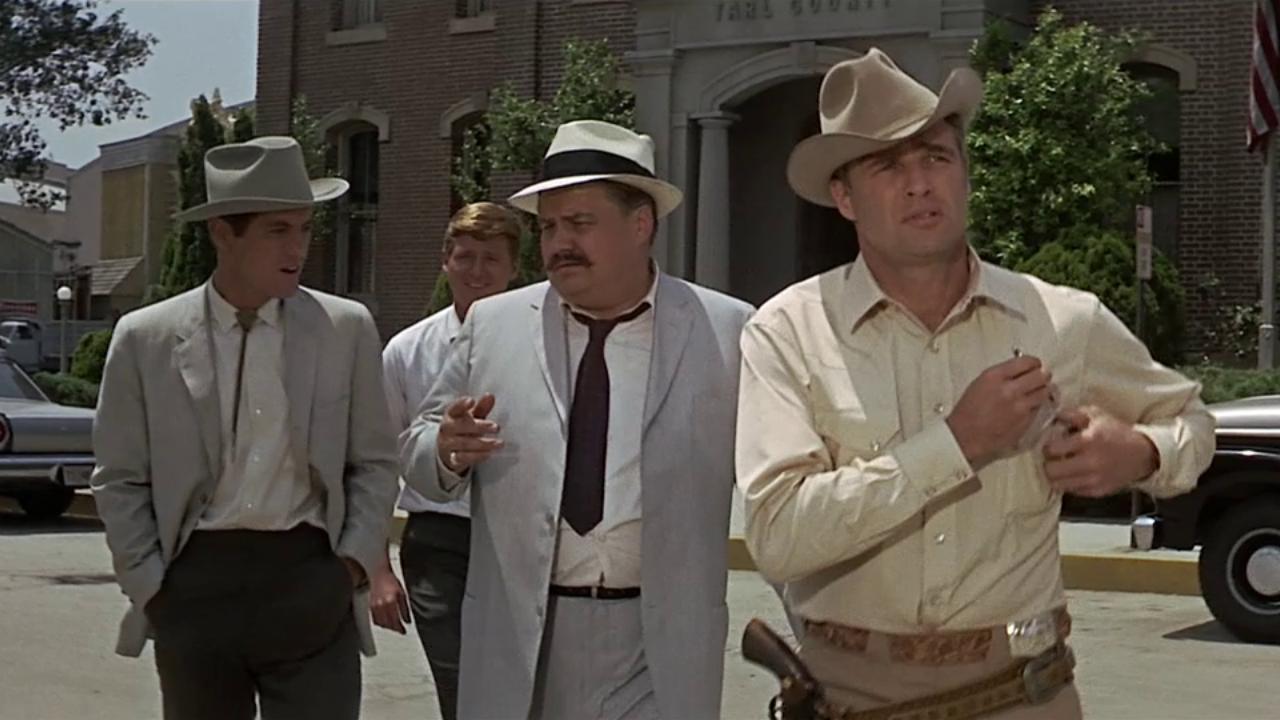 Lillian Hellman wrote the screenplay, adapted from the Horton Foote play, and there is so much to analyze regarding its characters, all of whom are larger-than-life but whose problems feel sad and relatable. Jane Fonda’s Anna is in a relationship with Val Rogers’ son, Jake (James Fox), the only relationship passing for love, other than the truly loving relationship espoused by Ruby and Calder. Jake and Anna have been in love since childhood, but a series of missed opportunities, time, and Jake’s desire to please his dad, sees the two married to other people and carrying on an affair in plain sight. It’s easy to see why they’re drawn to each other – Anna’s husband is (supposedly) in prison and Jake’s in a loveless marriage. But we’re never meant to hate these two. When Anna discovers Bubber is out, she wants to help him. Like Daisy Buchanan in The Great Gatsby, Anna can’t deny she does love her husband. And Jake, throwing aside his image as a rich man, loves Anna enough to help her. As with Bubber, Jake’s eventual end is sad because it’s so unnecessary. He’s a victim of circumstance as well, fortune’s wheel turns and Anna ends up being a cursed woman. Fox and Fonda are both so fantastic, and threaten to overshadow a legendary performer like Brando. Jake’s final moments with his father are so heartwrenching you can’t help but feel for all involved.

The rest of the cast is a grab-bag of talented individuals. Janice Rule is especially fantastic as the antithesis to Anna. As Emily Stewart she’s also carrying on an open affair with another man, but there’s little love involved. It’s evident that the two selfish people are just in lust, at the expense of their significant others (played by Robert Duvall and Martha Hyer). E.G. Marshall’s Val Rogers is a forlorn millionaire; he has everything yet his son resents him for it. Val shouts at Jake “Stop running away from me,” but there’s nothing Jake can do but run. He can’t run away from the town so might as well run away from what fuels it, his father.

The Chase is a beautifully constructed character study about the demise of a small town that reflected America at the time. The ’60s would end with death and chaos, much like the eventual bacchanal that happens in Tarl. By the end of the day the town is on fire, bodies are left behind, and a feeling of disgust permeates everything. Can Tarl be saved? Should it? I love that Twilight Time put this movie out. I’d only ever heard of it in the context of Robert Redford and had little idea of its true impact on the culture. It’s stark, at times brutal piece of Americana with fantastic performances.