The 1950s were a comfortable time for the Walt Disney Company; they knew how to cater to 1950s audiences. Their movies are perfect representations of the decade. By the time the 1960s rolled around Disney was starting to lose their footing (before completing failing at representing the zeitgeist) and started looking for new ways of staying relevant.

The story follows Tom (Tommy Sands) and Mary Quite Contrary (Annette Funicello) on the eve of their wedding. When the villainous Barnaby (Ray Bolger) kidnaps Tom to marry Mary for her inheritance, the duo ends up in the world of Toyland helping the befuddled Toymaker (Ed Wynn) make toys.

Disney had done adaptations before. The entire foundation of their animated studio was based on adapting outside work, after all. But this was the studio’s first attempt at adapting something without changing the songs and general source material. Although this is a loose version of 1903 operetta, the songs were lifted directly and placed in the movie. Unfortunately, production was a bit of a mess from jump, with long-time Disney animator Ward Kimball being fired as the film’s director, replaced with television alum Jack Donohue (who also voices the talking goose in the film). The film’s disappointing box office stopped Disney from tackling another big-budget musical till Mary Poppins in 1964.

Disney’s discouragement makes sense because there’s only so much that can be blamed on its being a 1960s fantasy musical. If anything, Mother Goose’s (Mary McCarty) opening line about “set[ting] your imagination free” seems content to banish any questions about the plot. From the beginning you’re left wondering if this is meant to be a play or not. Opening with a curtain rise, a stage and obvious two-dimensional backdrops is reminiscent of Rodgers and Hammerstein’s Cinderella. Brigadoon this is not, and yet the film never acknowledges why the entire movie looks so cheap. 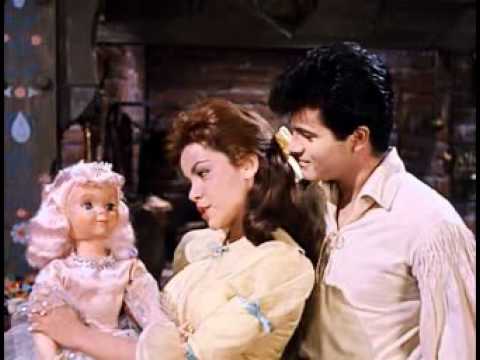 There’s actually little consistency and absolutely no world-building. We’re placed in a nondescript locale that can only be envisioned as some type of Mother Goose land, although the non-Mother Goose character Barnaby supposedly controls everything. And though the town looks vaguely Medieval, at least two of Barnaby’s songs discuss rent and income tax. Disney was the master of creating immersive fairy tale settings, this should have been like shooting fish in a barrel! The actual tangible sets like a pumpkin house, Mary’s garden, and the Toymaker’s house are all well done, and served as a walk-through attraction at Disney for the year of the film’s release. Even an angelic choir reciting the “Mary, Mary Quite Contrary” poem reminds audiences of “Second Star to the Right” and other classic Disney songs, yet the script doesn’t appear interested in retaining any of those passe elements.

The operetta’s original songs are far removed from the jubilant, toe-tapping numbers Disney was best known for (and it wouldn’t be till the aforementioned Mary Poppins that the Sherman Brothers would become the studio’s in-house songwriters), ranging from the dourness sung by Barnaby and his henchmen, to the slightly more upbeat numbers that try desperately to come off like 1960s pop standards. This is one of the big drawbacks of having pop star Sands and Funicello (billed here as simply Annette, pre-Beyonce) who sound so of their era. Funicello, despite her beauty and grace, sounds perpetually auto-tuned. I wasn’t sure if this was a 1903 operetta or The Parent Trap.

Kimball’s screenplay does possess some genuine laughs, particularly from Bolger, the henchmen played by Henry Calvin and Gene Sheldon, and the children. Calvin and Sheldon, obviously riffing off Laurel and Hardy who starred in the 1934 version of this, have some great moments of irreverence. Their greed causes them to bungle Tom’s kidnapping, and from there they’ve got murder on the brain; “Don’t hit him, tip him.” I’m normally adverse to children in children’s movies. Their presence is usually dictated by the genre and they usually up the cute level to interminable heights. In this case, they’re relegated towards the film’s second half, and even then in minor doses. They do yield a pretty hilarious line as they watch Tom and Mary share a kiss – “He just tried to bite her.”

We can’t ignore Ray Bolger as Barnaby because his presence sets the tone for what Babes in Toyland desperately wishes it was – The Wizard of Oz. In the wake of the 1939 musical countless films from other studios tried to replicate Oz’s success with the most infamous being Shirley Temple’s The Blue Bird (1940). The fantastical elements and adaptation of a popular turn-of-the-century work aside, Bolger’s character acts as both the Scarecrow and The Wicked Witch of the West but comes off like the love child of Vincent Price, John Astin, and the Child Catcher from Chitty Chitty Bang Bang (1968). He nails the humor – “let us plot” – but much like the rest of the film there’s no consistency to his character. He breaks the fourth wall in the beginning, never to do so again, and his various schemes serve as precise narrative shifts.

There are three movies mashed within the film: the kidnapping of Tom, the saving of Toyland, and the destruction of Barnaby and all three begin and end with little catharsis or payoff; the script is just done working with them. This laziness comes off worst in the kidnapping of Tom. In an exposition dump Barnaby reveals that Mary will be wealthy, for reasons, and that her “sheep support her” as a means of income. There is also some explanation of why the children live with her, and I doubt it has anything to do with the “Mary Quite Contrary” poem. After Gonzergo and Roderigo (Calvin and Sheldon) dump Tom at the gypsy camp Barnaby announces the gypsies will be arriving to celebrate his impending nuptials to Mary. This brings Tom back, of course, within a few hours in the film’s narrative time. Why Tom would play into the gypsies act, dressing up as an old woman (whose “breath doesn’t reek of salami…” one of the film’s ruder moments) and, hey, reveal who kidnapped him, is beyond me.

With Tom being saved the wedding can procee…..wait, there’s still an hour left. The babes finally make it to Toyland at the hour-mark, leading to a new movie with the same characters. Ed Wynn’s Toymaker gives the film a much needed boost courtesy of his zany pep. He’s complimented by a frazzled Tommy Kirk as his assistant. Kirk, for his part, looks like he’s…..drank a lot of coffee (this is a kid’s film). The Toyland half of the film seems to have purpose and makes up for much of the rough first act. The stop-motion wooden soldiers sequence is great – Disneyland would take the soldiers and implement them into their Christmas parade – and all’s well that ends well; it’s just sad that the second half couldn’t have been the entirety of the film. 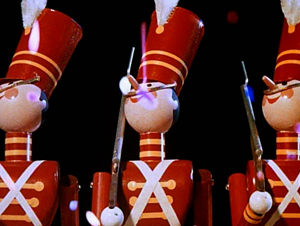 Babes in Toyland gets a pass from many for being “a 1960s Disney musical,” and I get what they’re trying to say. The 1960s musicals always seem a step removed from the current time, and though the plots are nonsensical the characters are relatable and endearing, and things move along. Babes in Toyland shows Disney’s distaste with being out-of-control. The characters are flat at best with actors that range from passable to anachronistic; there’s no consistency in the narrative presentation, and the pacing’s thrown off by confusion over the plot. Disney would save face a few years later, thank goodness.