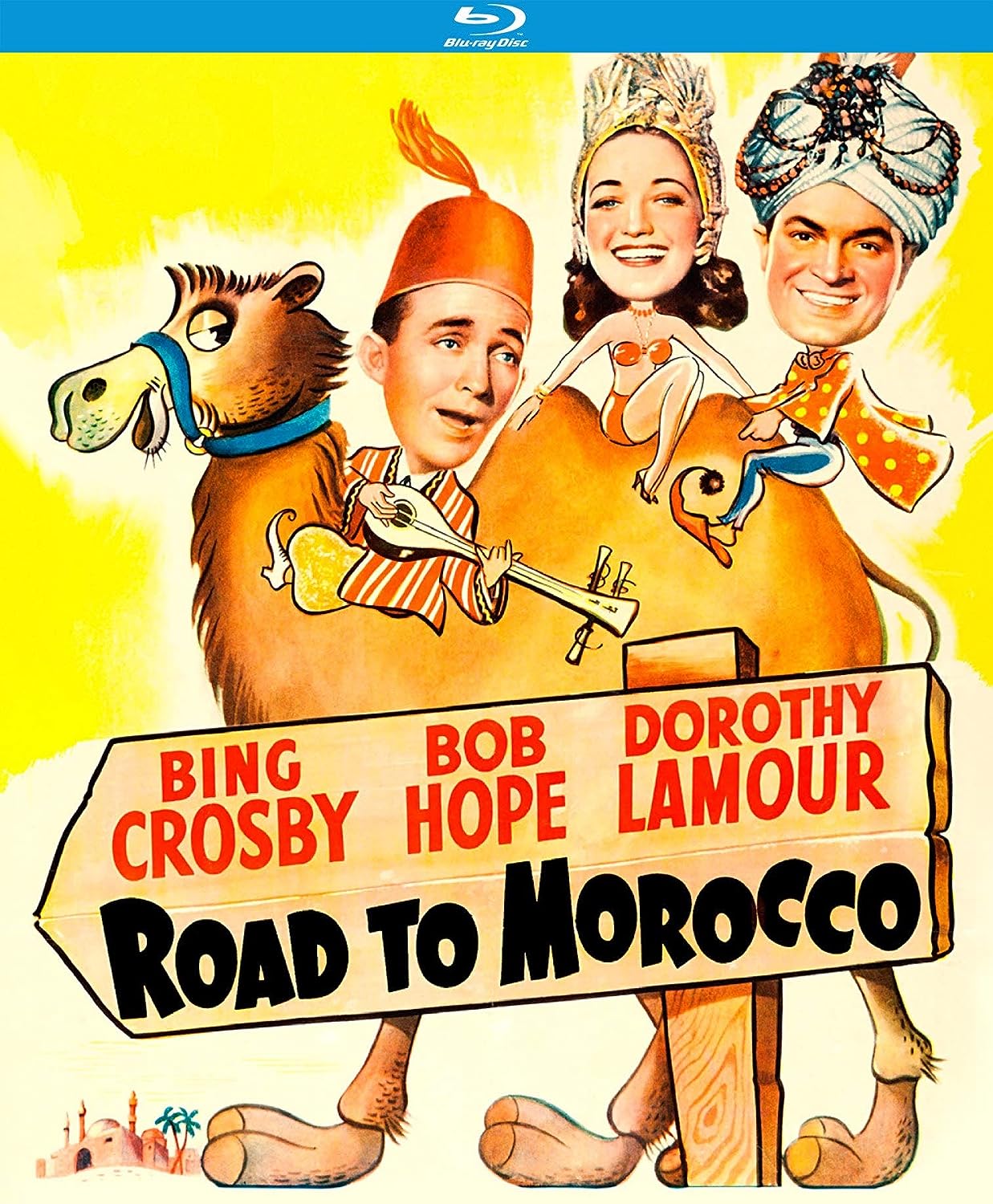 When Kino Lorber made plans to release several of the Bing Crosby/Bob Hope “Road to…” movies I jumped at the opportunity. I’ve never taken a trip with Bing and Bob, though the influences of their seven collaborations together in the series had long-standing ramifications for the rest of Hollywood. Unfortunately I soon discovered I’d started with the third feature, not the first, and while that never hindered the plot I fear it ruined some of the surprises I might have discovered had I watched this in order. Either way, Road to Morocco is a fun, if slight, feature with Bob and Bing in top form (even if I ended up being more focused on Dorothy Lamour’s amazing costumes).

Jeff and Orville (Crosby and Hope, respectively) are two stowaways whose boat explodes in the middle of the ocean. They end up drifting into the deserts of Morocco only to realize they have no money for food. Desperate, Jeff sells Orville into slavery and proceeds to move on with his life. But he soon discovers Orville is set to marry Princess Shalamar (Lamour) who, herself, is using Orville to fulfill an ancient prophecy.

Chalk it up to me reading an entire book on the career of Frank Tashlin but it’s easy to see how the director known for interrupting the flow of the film for comedy might have taken inspiration from these movies. Jeff and Orville aren’t just characters within the movie, at times it appears they’re aware they’re actors in a movie. As Bing’s Jeff sings during one of the opening songs, the two might just meet “Dorothy Lamour” and, what do you know, they do? This meta-narrative continues throughout the film, right to the end when Lamour herself coyly senses a feeling of deja vu. This playfulness extends to nearly every facet of filmmaking, from Bing and Bob playing air drums to go alongside the on-screen music, to editing with a group of camels receiving painted on mouths to discuss their inner feelings. The leads engage in a sense of anarchy that heightens the tension with the side characters who seem to have no idea they’re players in a feature.

With barely 90 minutes of screentime you definitely feel there’s just enough story to stretch to feature length. Jeff and Orville end up in Morocco but realize they’re still just as poor there as they were in America. The two spot what in 1942 would be referred to as the village simpleton (what we now call the mentally disabled) getting free food and decide to follow suit. Honestly, it was incredibly hard to watch the nearly 10 minute segment where Jeff teaches Orville how to “act” mentally impaired. It’s a moment that’s painfully dated and though it does lead to a moment that might have drawn some unique commentary – he meets a shopkeeper who talks similarly and doesn’t find it amusing – it’s still a gag that we’ve hopefully grown from. Thankfully that’s the only moment of true pause in the film. The majority of the jokes extend to verbal sparring between Jeff and Orville, and the duo’s nightly visitations from Orville’s deceased Aunt Lucy (played by Hope in drag).

It’s easy to see why Bob and Bing were paired up; their verbal patter has a nice rhythm to it. Crosby, once again, plays the smooth-talking ladies man to Hope’s vaguely effeminate and sexually immature dope. Maybe because Hope’s character is so flawed, but it’s easy for Crosby to be overshadowed in this picture. The two’s homoeroticism is hilariously portrayed, with a camel’s kiss being mistaken for each other; the two later share a smooch that’s funny in how expected it is. Later Orville reads from a “How to Make Love” book that had to appeal to any teenage boy watching.

But, for me, it was all about Dorothy Lamour. Lamour is a name I’ve heard spoken of more than I’ve seen her work and she is luminous! Swathed in Edith Head’s exquisitely designed gowns and headdresses, Lamour is a prize worth fighting over. It isn’t properly explained why Princess Shalamar is seemingly content to murder a man; it’s foretold that her first husband will die in marriage, allowing her to marry a man she loves and thus Orville is the first unwitting victim. When she’s reunited with Anthony Quinn’s virile Mullay Kasim it’s implied that the two want to be together. The humor certainly could have gone darker with Princess Shalamar being content as a black widow, but that’s not the case.

Kino continues to put out some remarkable classic films with beautiful presentations and whether you’ve watched the Road to… movies a thousand times or never, now is a good time to add these to the collection. I’m eager to consume the other installments I have (including the first one!). I can’t say I’m a fan of Bob and Bing, or that my thoughts on them have changed after watching this, but I understand the appeal and Road to Morocco is a fun little trip.