Director John Brahms was best known for his sumptuously decorated murder mysteries, 1944’s The Lodger and 1945’s Hangover Square. Before he was getting A-list talent to go alongside his beautifully decorated costume dramas he crafted this mystery, itself a bizarre amalgamation of the dying Universal monsters franchise and the old dark house thriller. The Undying Monster is a story both literal and metaphorical that would be a polite diversion if Cat People (1942) hadn’t been released that same year (telling a similar twisted tale).

Rumors abound that the wealthy Hammond family are cursed, with certain members of the family doomed to die tragic deaths. As the prophecy goes, “When stars are bright on a frosty night / Beware thy bane on the rocky lane.” When Oliver Hammond (John Howard) is attacked by an unknown entity it’s up to his sister, Helga (Heather Angel) to enlist the help of an unconventional American scientist/detective (James Ellison) to save Oliver, and possibly end the Hammond curse forever.

The Undying Monster is based on a novel by Jessie Douglas Kerruish who appears to have only wrote two novels of which this is the best known. Going off the film alone it attempts to do far too much in just 63 minutes, jumping from being a haunted house film to a monster movie to a Sherlock Holmes-esque mystery. The film’s rushed nature doesn’t just extend to plot points – characters seem to endlessly run from place to place with the camera, at one point, noticeably speeding up a character’s gait for a series of near misses. Someone cue the Benny Hill music! A character hears a noise in one sloppily edited scene that cuts to another woman running and screaming from creatures unknown. It takes a few minutes to realize the screaming woman isn’t Helga, though the spliced progression would imply it’s her. The characters here aren’t individuals but part of a grander history that’s meant to stand in for a longer narrative; a questionable feat since there’s too little story to go beyond an hour.

The narrative might not attract but you can’t deny what they’re surrounded by. The hulking interiors overshadow the actors, literally dwarfing them in magnificent history. The lack of close-ups, possibly to save on funds, allows for the full grandiosity of the settings to take on an overwhelming and oppressive force. Lucien Ballard’s cinematography plays up the shadows creeping into every corner and the smokey fireplaces hiding everyone’s true intentions. Scheming characters – or red herrings – spend their days living in these dark places, talking about secrets an inch away from being revealed. It’s almost offensive to the beautiful shot compositions that characters spend so much time pointedly hiding behind each other, with peripheral vision non-existent. When Helga she isn’t aware of being watched it’s a laugh line because no one is aware they’re being watched. She’s not alone! 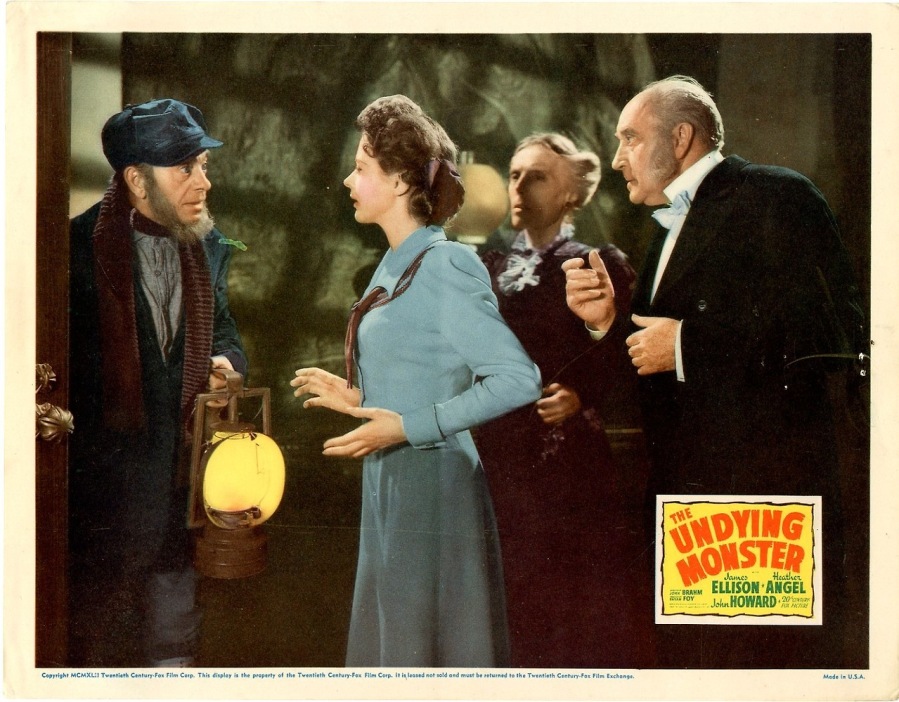 It’s easy to assume you’re missing something because the small cast lacks any discernible depth. A history of devil worship, human sacrifice and possible weirdos in hidden rooms is more interesting than what audiences end up with, and the cast is too vanilla to come off as inhabiting the history. Heather Angel is a discount combination of Joan Fontaine and Greer Garson. She’s fine, but there’s little personality to her, or an explanation as to why she speaks with a British accent and her brother doesn’t. Angel’s Helga introduces us to the Hammond household but she’s pushed to the side in favor of an American detective/forensic scientist played by James Ellison.

Ellison’s Robert Curtis character is the type of 1940s detective that you hope only exists in dimestore novels. I mean in the fact that he’s kind of a misogynistic jerk who constantly brings up his female partner’s “feminine intuition” as her only sleuthing skill. Ellison’s got just the right amount of snark for the role, though you might want to punch him in the snooker by the end. He’s complimented by the darling Heather Thatcher as Christy – the one with the “feminine intuition.” Curtis and Christy take point in the narrative as if they’re being groomed for a film of their own when really it’s just Christy who deserves the movie. Christy is daffy in a way you’d expect from a British ghost story. “Oh, my! There go my lovely ghost chains!”

The actual mystery has a fair share of red herrings in the brief hour runtime. Characters look around corners as if they’re scheming and Bramwell Fletcher’s Doctor couldn’t be more villainous if he wore a sign! The Undying Monster goes for broke in its mad desire to have its cake and eat it too. The patchy narrative leaves suspense in the dust. It’s hard sympathizing with Oliver’s plight when he’s been aiding everyone with little more than a cramp. He isn’t suffering or seemingly knocking on death’s door. The third act loop literally manifests a monster and I commend the movie for doing so. Does it make sense? Nope. Is there any time for characters to discuss? Nope. Dr. Curtis treats the entire “curse” like a bad case of eczema. He says it’s akin to mental illness but considering we see an actual transformation into a creature….not sure if we’re interpreting things in the same way. And the film’s conclusion rests with Curtis and Christy with no mention of how Helga’s dealing with any of the film’s narrative aftereffects.

The Undying Monster ends up being rather funny in how spastic and crazy the entire affair is. There are moments that feel clipped from a larger story, characters come and go. But in the end it’s a fun diversion for an hour and the new Kino Blu-ray looks lovely!