If there’s one thing we here at Ticklish Business can’t resist, it’s diving into a work of film noir. We can’t resist! So, how excited were we to learn that Warner Archive had a brand new Blu-Ray coming out of Crossfire? The Blu-Ray features commentaries by legendary noir scholars Alain Silver and James Ursini as well as interview excerpts from legendary director Edward Dmytryk.

Read on for our review of Crossfire!

At the beginning of March, I reviewed the social commentary drama Gentleman’s Agreement; and while I generally was pleased with it, I found that the message was a taste too pat and preachy. The mold is cemented in Crossfire with does a slightly better job of cloaking the social commentary in the vein of a noir murder mystery.  It’s lacks the emotional gut-punch of Bad Day at Black Rock (also starring Robert Ryan), but the stellar trio of Ryan, Robert Mitchum, and femme fatale golden girl Gloria Grahame elevate the film above a staid drama.

A group of soldiers are questioned in the murder of a man they were all seen with.  The main suspect is a man named Mitchell (George Cooper), but his friend Keeley (Mitchum) knows Mitchell isn’t a murderer.  As Keeley works to clear Mitchell’s name, he starts to suspect a fellow soldier, Montgomery (Ryan), who might be hiding a dangerous secret. 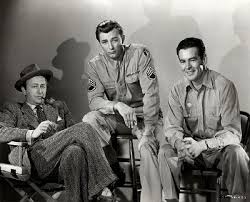 Sadly, the TCM guide ruins the twist of the movie so I’m going to reiterate it here: the movie tackles racism through the murdered man being Jewish.  Once that twist is revealed, and especially before you watch it, you’ll start comparing it to Gentleman’s Agreement even though the two have little similarity otherwise.  In fact, the two were lumped together to the point of being released a few months apart (although this holds the distinction of being the first B-movie to get nominated for Best Picture).  The original book, The Brick Foxhole, dealt with homophobia, and you can see traces of that within the plot.  The overbearing, homoerotic nature of the murdered man to one of the soldiers is evident (he sidles up to the soldier and says he understands his pain which “is worse at night”), and Montgomery describes Mitchell as “sensitive” with the implication that the soldier is a homosexual.  In several sequences you could easily cross out the actors’ use of the word “Jewish” and insert “gay.”  The attack on the man is easily explained by saying it was a hate crime due to his religion, but it could have been explosive had he been attacked for his sexuality; unfortunately, the times just weren’t right.

The plot is a standard detective story, that doesn’t appear interested in the detective played by Robert Young.  For the most part, it’s the  story of a tire detective against a band of brothers.  By the end, Young’s character is supplanted by Mitchum who solves the caper and hands Detective Finlay the collar!  Was Mitchum’s role expanded, because it certainly feels like it?  I get all my Robert’s confused and get Robert Young confused with (Robert) Taylor and (Robert) Montgomery.  Honestly, Young sits around and hears the various stories about what happened leading up to the murder.  Anyone could have inhabited the role and played it the same way.  It’s why I didn’t place him in the trio of actors in the introduction because there’s no recommendation I can give to him one way or another.

The rest of the cast are better suited for the bitter noir tone of the film (although the movie could have been significantly darker than it already is).  Robert Mitchum plays the hero of the piece, tracking down the true killer to absolve Mitchell.  He’s a solid detective if you’ve seen Out of the Past, but he’s overshadowed by the malevolent force that is Robert freaking Ryan!  I’ve watched a few of Ryan’s roles and I didn’t think he could have been better than he was in Bad Day at Black Rock; I still believe that role is his finest but this was an early prognosticator!  Again, TCM – Robert Osborne‘s introduction to the film specifically – revealed that Ryan was the villain from the start (although Ryan’s very presence usually screams villain), but by the 45-minute mark you can’t deny he isn’t the killer.  Ryan is just menacing in the worst way; a bully whose only joy is in abusing mild-mannered Leroy (William Phipps) – “He’s from Tennessee.  He just  learned to wear shoes.”  It’s easy to believe that Montgomery is a racist, even though his motives (he simply hates Jews and thinks they’re exempt from the war) are insignificant, but I guess that’s meant to emphasize his narrow-mindedness.  Regardless of motives, Ryan is the reason to watch this.  He’s the ultimate snake in the grass: charming and domineering, yet at the same time he gets pleasure out of beating on people (when he starts slapping a fellow officer, glee and laughter bubbling out of him, you’ll take a step back).

Director Edward Dmytryk is proficient in the world of noir and he infuses a hammy social commentary film with a harsh injection of noir lust!  The opening sequence is beautifully rendered and reliant on light and shadow with the silhouette’s of two struggling men being all that’s needed to set up the mystery.  The audience have watched the crime, have bared witness to it, and are trapped in being witness and detective.  The use of flashback allows the audience to take in all the different perceptions of Mitchell, from Keeley’s presentation of him as a love-sick sap to Montgomery decrying him as lusting after men.  The female characters are pure noir, and work with and against the movie.  This is my second Gloria Grahame film (the first being It’s a Wonderful Life), and she is femme fatale to a “T.”  I didn’t want to compare her to B-movie star Audrey Totter, but if anything Totter has borrowed from Grahame.  The movie takes a divergence into the exploring the character of Ginny (Grahame) and her weird relationship with a man who might be her husband/John/stalker.  The complexity of her character belonged in a different film compared to the boy’s club of the main plotline, but I was drawn to her character.  She’s different from a classy noir dame like Veronica Lake; you can tell that Grahame’s characters have led hard lives.  Jacqueline White plays the other female, Mitchell’s wife, Mary.  Her name is Mary, that should describe her character to you.  White doesn’t play anything different from what she played in The Narrow Margin; she’s the sweet housewife who stands by her man.  At times, the gauzy filter used on White makes her unrecognizable, like you’re watching her through foggy eyeglasses.

Yes, the plot is just as preachy as Gentleman’s Agreement; especially once Finlay goes on to give a lengthy speech about Irish racism as a means of saying, “Hey, we’re all immigrants!  Racism is a historical process that’s happened for generations.”  However, Crossfire’s usage of noir makes that one lone sequence in a surprising B-movie murder mystery.