Wuthering Heights is one of my favorite books, and I conveniently bought the 1939 adaptation with Sir Laurence Olivier recently (I totally didn’t come up with arbitrary excuses to rewatch my favorites as part of Summer Under the Stars).  Every literary fan has their favorite adaptation of Emily Bronte‘s novel, with many saying the 1992 version is the definitive one.  While that version includes almost all of the novel, my Heathcliffe and Catherine will always be Olivier and Merle Oberon.  This tragic tale of forbidden love, conflicting passions, and haunting romance will certainly give you a good cry.

Heathcliffe (Olivier) is an orphaned gypsy whose been raised in the Earnshaw household since boyhood.  In that time, he’s developed a tender relationship with Catherine Earnshaw (Oberon).  As the two grow into adulthood, Cathy is unable to commit to Heathcliffe completely.  When the wealthy Edgar Linton (David Niven) asks for Cathy’s hand in marriage, her and Heathcliffe will be torn apart, leaving Heathcliffe to seek revenge. 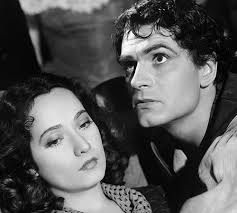 It’s been alleged (and is true for the most part) that 1939 was the best year for films, and Wuthering Heights is proud to be a part of that year.  It’s a spellbinding blend of romance and Gothic horror that may lack particular elements of Emily Bronte’s novel, but adds up to create a passionate film.  The opening, and several interiors scenes, are shot like a horror movie; in the beginning, I was confused as to whether I was watching Wuthering Heights or Dracula.  The flickering candle light in the inky blackness is superb and sets the audience up for the dark and torturous love story of the characters.  I say torturous because of how uncontrollable the love between Heathcliffe and Cathy is.  They’re both wild, restless spirits who are confined by pedigree and propriety.  Cathy is spiritually bound to Heathcliffe, and that’s counterbalanced by the security and material love that Edgar can provide her.

Many say Catherine is a shallow bitch, but the movie, emphasizes the control male patriarchy has on her identity.  Her upbringing has ingrained in her this belief that she should demand security (and wealth by extension); but she’s desperate to break out of that confined world and be free to love – and be with – Heathcliffe.  With all that pressure, it isn’t surprising that Catherine would be conflicted about where to put her heart.  This dichotomy is the reason Catherine and Heathcliffe’s moments on the moors are so special; it’s their fantasy world where life and social bearing can’t harm them.  Unfortunately, it mires them in a childish, idealistic view of romance that can’t be fulfilled.  Young Heathcliffe vows that “Whatever happens out there, here, you will always be my queen;” a dream that ends up slipping through his fingers due to the uncontrollable forces of class hierarchy.  Catherine, unfortunately, is unwilling to give up the fantasy.  She dreams of running away with Heathcliffe, but can’t ignore the real-world implications of that decision; namely being poor.

Catherine and Heathcliffe’s stubbornness turns Wuthering Heights into a tragic romance.  They both want the other, but are unwilling to make the right concessions to be together; both leave before hearing the others declaration of love, leaving them believing (mistakenly) that they’re unloved by the other.  Laurence Olivier is Heathcliffe as much, if not more, than Catherine proclaims to be.  He’s rugged, stubborn, and yet there’s a prickly love within him.  As he opines and pleads for Catherine to come to him at the story’s opening, you hear the keening of a desperate, heartsick man.   Further on, you understand the implications of his wrath when he brings down a curse upon the Lintons: “I’ll bring this house down in ruins about your heads.”  You better believe the man means business!  Unfortunately, the loss of the novel’s second half – which understandably was removed to prevent confusion over the combined names of the Linton/Heathcliffe offspring – prevents you from witnessing the despicable wretch Heathcliffe becomes.  Audiences want the romance and that doesn’t come off when Heathcliffe’s scheming to kill Linton slowly, as he does in the novel.  His character is far softer in this adaptation than future ones.

With the unbridled will of Laurence Olivier, the other actors pale in comparison although never-fading into the background.  Merle Oberon is lovely, taking an unsympathetic character and turning Catherine into a somewhat gentle soul; certain moments have you wonder about Catherine’s role as a pawn in this romance, allowing you to feel for her situation despite her tendency to exacerbate it.  David Niven isn’t the mugging character actor he would become, but a loving, albeit droll husband to Cathy.  The surprising one is Geraldine Fitzgerald as Isabella; a character who usually ends up being forgotten entirely.  Isabella marries Heathcliffe out of love (and wayward jealousy), but ends up being physically “withered” by his hatred for her.  Isabella is a character far too dour to be the lead, and yet her predicament is worse than Catherine’s; Isabella is stuck with Heathcliffe until the end of time, and has to go through her days knowing she’ll never be loved.  She’s another woman forced to be repressed for the sake of others.

Wuthering Heights may not be an entirely faithful adaptation of Emily Bronte’s novel, but it’s certainly the most romantic.  A sprawling tale of love set against the moors (really, the San Fernando Valley), and Laurence Olivier’s performance captivates you.  A doomed romance you wish ended differently.