I’m taking a class on American horror films, so don’t be surprised to see a spate of horror movie reviews randomly crop up throughout the next few months.  Expect said reviews to be fairly short, as I’ll be writing them immediately after class.  My first day saw us watching a double bill of Frankenstein and Bride of Frankenstein (have I mentioned how much I love this class already?)  Since I reviewed Bride of Frankenstein during Halloween I figured now would be the perfect time to go back to where it all began.  When I wrote the review for the sequel it had been awhile since I’d seen the original.  Now that I’ve seen both, I maintain more fervently that the sequel is superior.  Frankenstein is a different animal, with an emphasis on horror, the idea of creation, and you have an equal lack of sympathy between the Creature and the people.  Karloff is infinitely more frightening in this film than its sequel, but he also doesn’t have enough time to make us bond as closely to the Creature as he does in the sequel.  Frankenstein is a must-see for horror aficionados as well as a damn fine movie, but I think the sequel encompasses the overall package.

Scientist Henry Frankenstein (Colin Clive) becomes obsessed with creating life from parts of the dead.  He gets the chance to be God when he creates a horrific creature that goes on a killing spree, ultimately putting Henry and his bride Elizabeth (Mae Clarke) in danger. 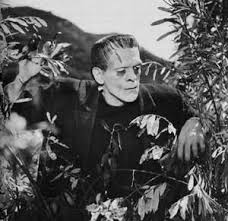 Right off the bat, I knew that Valerie Hobson from the sequel replaced Mae Clarke, but boy is it funny to see how James Whale and crew don’t hide the fact.  In the sequel, which takes place a few minutes after the conclusion of this film, we see Elizabeth who now sports long, dark hair.  Also, the sequel conveniently kills off the humorous Baron Frankenstein (Frederick Kerr), and changes the actor playing the Burgomaster (Lionel Belmore in this movie).  That’s enough of a comparison.  Frankenstein is a horror classic because it sets up the basic things one should fear: death and man’s reach exceeding his grasp.  When Henry proclaims that he is God, you believe him.  Colin Clive gives a superior performance here, playing the deranged Henry with an unrestrained glee.  By the middle of the movie, you don’t truly believe he’s ready to marry Elizabeth; probably why he jumps at the opportunities presented in the sequel.

The human cast is unimportant because this introduces us to Boris Karloff, who is uncredited in this movie; in the sequel he’s introduced as simply “Karloff.”  Karloff went through a complete transformation to play the role of the Creature.  Not only did he endure countless hours of make-up and prosthetics,  but he also removed his dental work to give himself a gaunt appearance.  He definitely looks dead in this movie, and an unsettling type of dead to boot.  You feel that you’re seeing an otherworldly inhabitant, which still is unsettling to audiences of today;  I can only imagine how audiences of 1931 reacted to seeing such expert make-up work.  Karloff does present a dual-sided image to the creature, and his violent outbursts aren’t unmotivated.  I just feel he’s written to give a more complex characterization in Bride Of.  The stand-out scene is when the Creature is interacting with little Maria (Marilyn Harris), and accidentally throws her into the river.  It’s a sweet scene tempered by an act of joy for the Creature, but utter horror and tragedy to the audience watching.  You really don’t know who to side with in that instance, both the Creature and the townspeople’s responses are wrong…but justified.  The script is certainly multi-layered for a horror film. 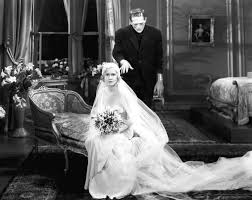 The rest of the cast is good, but none hold a candle to Karloff (I’ve been watching far too much of Karloff’s work in the last week).  Colin Clive continues to play the deranged scientist, although I mentioned he’s far more maniacal here.  He’s not presented as the romantic leading man; that job’s left to his friend Victor (John Boles).  Victor isn’t coy about his love for Elizabeth, and I really suspected that the Creature would off Victor considering the way his relationship with Elizabeth is introduced.  The man shows up, and under no uncertain terms declares his love for Elizabeth.  Unfortunately, the movie does nothing with this, probably because of the brief runtime.  Interestingly enough, Victor doesn’t show up, nor is he mentioned in the sequel.  Mae Clarke is also good as Elizabeth, but there’s no real grist to her character.  The scene stealer is Kerr as Baron Frankenstein.  He provides the levity of the film, and actually gets the final scene in the movie.  The human characters do provide a key source of humor, and at one point I had to laugh because they really bring about their own destruction.  Henry’s colleague, Dr. Waldman (Edward Van Sloan) resolves to kill the monster…but not before dissecting him first.  Either he’s a moron, or really sadistic.

Frankenstein is a worthy first foray into the horror field (and filmed on the Universal backlot).  Karloff dominates, both literally and figuratively, the entire narrative, and the story is contained to a tight 70 minutes; never overstaying its welcome.  Definitely watch it, and then chase it with the sequel.