The horror genre turned Universal Studios into a flourishing business, but in just a decade it was already falling from grace. The rapid release of titles fatigued audiences, putting the studio back into the red. After successful re-releases of Dracula and Frankenstein, Universal decided to take a chance on another walk with the flat-top Creature. Son of Frankenstein was the final “A” title in the Frankenstein series and ushered in a new, more humorous approach to the franchise at odds with the preceding, James Whale-directed, features.

Baron Wolf von Frankenstein (Basil Rathbone), his wife and child travel to the ancestral home of his father, the dearly departed Henry von Frankenstein. But the townsfolk aren’t having anymore Frankenstein nonsense and keep Wolf on a short leash. When he learns his father’s Creature (Boris Karloff) is still alive, cared for by Ygor (Bela Lugosi), Wolf reluctantly agrees to help the ailing monster. But when a body count inevitably rises, Wolf will do anything to keep the Creature out of sight and under control.

It’s remarkable the changes in nearly a decade since the first Frankenstein came out. Look at Colin Clive’s performance versus Basil Rathbone. In only ten years the stagy, formalistic recitation of lines has softened into a clearer, more relaxed patter of discussion. Wolf and his wife Elsa (Josephine Hutchinson) have a camaraderie together. They’re comfortable. Mind you, much of this is due to the film’s comical tone but the entire venture shows actors were at ease with the cameras.

Compare this to either of the previously directed James Whale films and you notice vast differences. Son of Frankenstein has more recognizable stars, but the expansive sets are replaced by flat, painted canvases. The “Frankenstein place” retains the previous German Expressonism elements, particularly the von Frankenstein estates’ M.C. Escher-esque staircases, but it’s a marked downgrade from the previous film. The reduced budget also leaves the town, once filmed in bright day with different locations, relegated to a few night shots.

As I mentioned during my Bride of Frankenstein (1935) review, it’s hard to understand how audiences responded when they saw it. Four years passed from the last time they’d encountered the Creature, and Son of Frankenstein starts by introducing a new generation of characters. Unlike the transition from Frankenstein (1931) to Bride, there’s no need to recall what happened previously. Wolf arrives telling the audience he’s the son of the deceased Henry von Frankenstein, and the Creature supposedly died. The movie washes away the past, with the hopes that audiences will recall the basic tenets of the narrative, though it’s far from required.

Like the previous features the inability to rewatch back-to-back allows new director Rowland V. Lee to change up items from the previous films. Since Rathbone is about 35 Henry and Elizabeth’s deaths are easily understood. This also explains the significant changes to the town, which loses the German gingerbread/Fantasyland look it sported in the previous films. However, for all the townsfolks’ presumed hatred of the Frankenstein name, why is the town named Frankenstein? (The town was unnamed before, short of those German signifiers). Wolf also learns he’s the overseer of the town of Frankenstein, and the citizens are his subjects. I don’t recall Henry Frankenstein having a Ben-Hur level fiefdom of people?

Having only previously seen Basil Rathbone in The Adventures of Robin Hood (1939) all I can say is, Hellllloooo, Basil! Basil Rathbone plays Wolf as calm and dignified until all hell breaks loose. His interactions with Bela Lugosi’s Ygor have an Abbott and Costello vibe; Ygor pulls the strings and laughs at Wolf’s reactions. Rathbone also shows a flair for comedy, internally hiding his screams as the Creature starts unraveling his life. Keeping it together and running between rooms as Wolf’s son (a young Donnie Dunagan) explains seeing the monster is Rathbone at his comic peak.

Because this still fancies itself as vaguely horror, the comedy and scares are equal, although the gloom and operatic quality from the Whale films is erased completely. Bela Lugosi is grinning menace as Ygor, the substitute for the previous Dr. Pretorious. Lugosi originally wanted to play Henry Frankenstein back in ’31, and gets a chance to appear as one of the more legendary characters here. Covered in fur, Lugosi shows his true acting potential. He’s funny, especially alongside the bloodthirsty townsfolk who accuse him of body robbing, “so they say.” 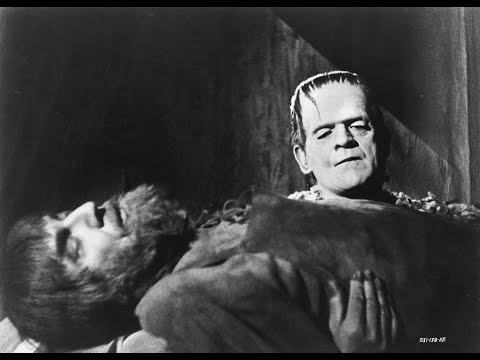 Donnie Dunagan as little Peter von Frankenstein steals every scene. I was fortunate to talk to Dunagan about the film post-TCMFF and he had great reminisces about working on this. Dunagan’s a towheaded five-year-old who creates a performance on par with Margaret O’Brien’s in Meet Me in St. Louis (1944). The way he emulates Karloff’s walk is hilarious.

The humans take center stage, leaving Karloff on the side. This was Karloff’s final appearance as the Creature, much of it coming from his own fears of being typecast. Ygor prods Wolf about the brotherly bond between the real Frankenstein son and the Creature (a generational conflict that continues between the Creature and Peter). A title like Son of Frankenstein brings up generational history and familial underpinnings that collect under the whole franchise, but pass by. Is the Creature jealous of Peter, Wolf’s real son? Or does the Creature want to be Peter’s father? This is a straight creature feature with ‘ole flat-top left to produce conflict. Like Bride, this Creature is a rounder faced behemoth discreetly parceled out. He takes a noticeable step back from his previous iteration. Gone is the talking and increasing intelligence. He’s nothing more than a vehicle dispensing terror.

Son of Frankenstein closed the chapter on the Frankenstein franchise as James Whale envisioned it. In its wake we get this enjoyable mix of chills and fun, with fantastic performances from Rathbone, Lugosi and Dunagan.