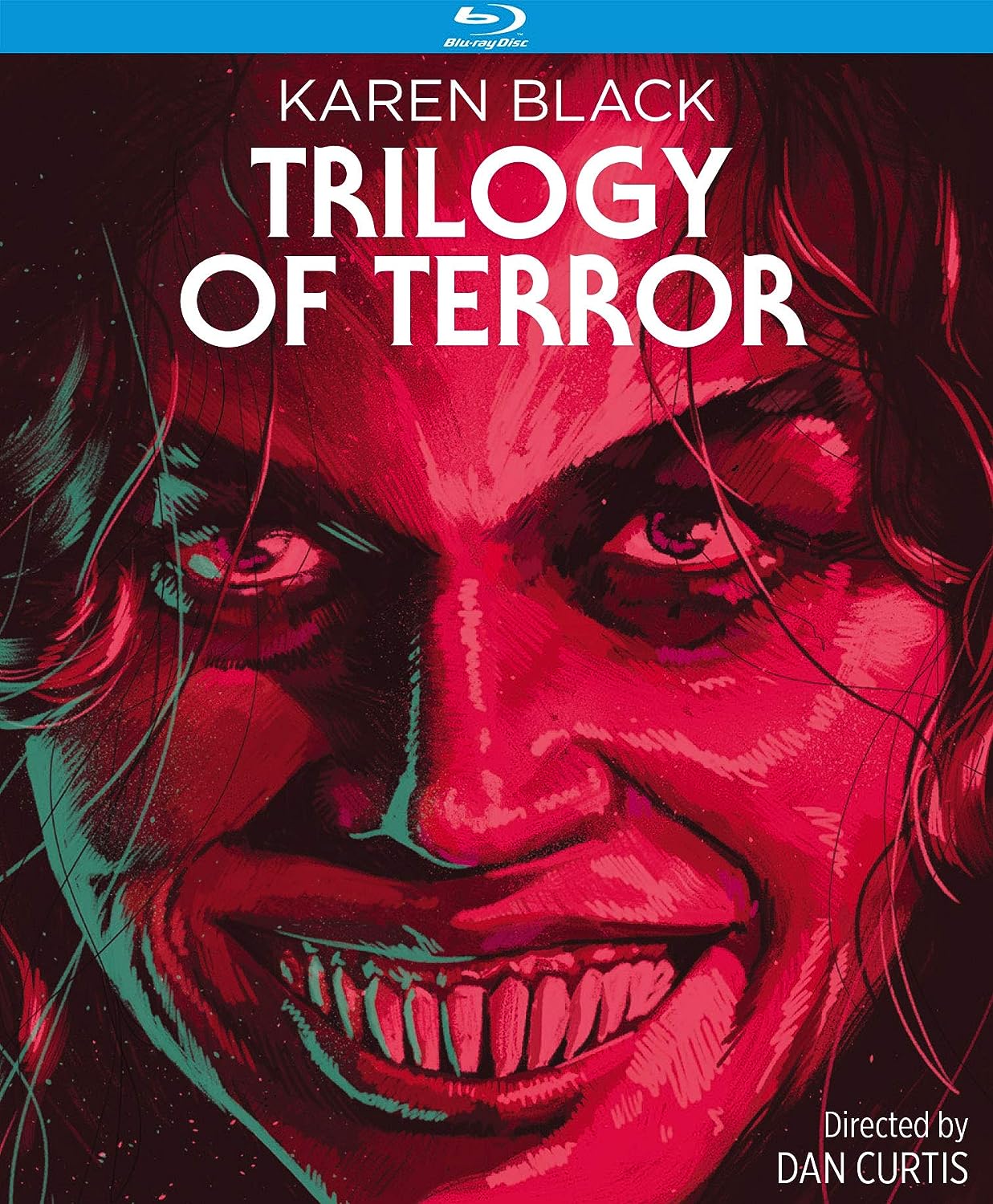 I heard about Trilogy of Terror long before I ever saw it. For my mother, she swore it was an actual film she saw in the movie theater and, as a kid, was one of the scariest things she’d ever seen. However, in speaking to many people around my mother’s age who recall the movie, they tend to attribute that statement to the made-for-TV feature’s third act. In fact, many of them didn’t particularly recall the first two segments of this anthology show, probably why they erroneously assumed this was a theatrical release. The myths around the film can now be dispersed with Kino releasing the TV movie on Blu-ray for the first time, and helping me – a woman who’d only heard about the movie in passing – try to figure out why it’s so beloved today.

Based off a trio of Richard Matheson’s stories, Trilogy of Terror follows three different women (all played by Karen Black). In “Julie” a mild-mannered college professor is assaulted and blackmailed by a male student. “Millicent and Therese” portrays the lives of two sisters who can’t stand each other. And “Amelia,” chronicles a woman’s terrifying encounter with a Zuni tribal doll.

Compared to my previous review of a Dan Curtis film, 1973’s The Night Strangler, Trilogy of Terror was an uptick in quality. Anthology features are almost always a sure bet because the director and screenwriter are making short films. The impact is low and the margin for error is smaller, hence why even a solid final feature can elevate the quality of the movie overall. Matheson’s work always had a strong infusion of social commentary with horror and I’d be interested in seeing these same stories revisited in 2018, preferably with a woman director. Karen Black’s performance in all three stories is unassailable. Whether she’s playing a terrified woman, incredibly flirtatious, or extremely manipulative, she wears all the roles like a second skin. You buy that these are three distinct characters (four if you count Millicent AND Therese).

Since this is an anthology feature let’s look at each installment individually:

“Julie” – It’s not great for your feature to introduce it with the worst and most dated vignette. Maybe in 1975 this was progressive, but I didn’t see it. Julie is a college professor teaching the oldest college students in the world (yet there are lockers in the hallways so maybe this is night school, who knows). One of her students, Chad (played by Black’s husband at the time, Robert Burton), gets it into his head that he needs to sleep with Julie. He takes her out and then proceeds to drug and rape her, eventually blackmailing her into being his sex slave.

Discussing all the problems with this short takes more time than I’m willing to devote but it’s a feature that wants to have its cake and eat it too. The “twist” ending attempts to undo everything we’ve seen in the short’s ten minutes by having Julie be a magical instigator of what is meant to be a BDSM-esque relationship (written by people who don’t seem to understand the concept), but is really just a magic wand to wave away rape. If the film didn’t tell us the story from Chad’s perspective, it might have worked better. We watch as Chad drugs Julie, rapes her, and proceeds to gloat about his escapades to her. Yet, this is presumably what she wants, so it’s okay? Then give us the story through her eyes, not her assailant’s. It doesn’t help that the reveal feverishly arrives in the first minute making it come off even more what it is: a band-aid. It’s also meant to wave away the fact that Chad is the most bumbling criminal in the world. Julie could have turned him in but the movie doesn’t want her to, thus adding to the sloppiness of the script. With second-wave feminism starting to heat up around this time “Julie” looks like a pre-backlash short masquerading itself as a feminist tome and I’m not buying it. Maybe I needed to be there in 1975.

“Millicent and Therese” – Millicent is the shut-in, quiet twin sister to the flamboyant and amorous Therese. The two despise each other and Millicent believes it’s because Therese is a minion to Satan. The twist here is as plain as the wig on Karen Black’s head when she’s playing Therese. That being said, had this been developed into a Twilight Zone-length episode it could have been great. Unfortunately there’s little time to build on Millicent’s fears of Therese being a witch. Characters tell her she needs help, and we only see Therese in one scene, dulling the impact of whether Millie is deranged or not. Had we been given more time with Therese the ambiguous nature of Millicent’s claims might have been more firmly established. As it is the truncated runtime makes the ending all the more apparent. This is a great showcase for Black, though, and it does a lot to watch the taste out of your mouth from the previous vignette.

“Amelia” – This is the short everything thinks of when they refer to this movie. Amelia is a woman hampered by her mother’s smothering who buys a Zuni hunter figurine for her boyfriend. But when the doll’s gold lock falls off the spirit being held back inhabits the doll, seeking revenge. I naturally have a fear of dolls (maybe because so many movies have presented them as frightening rage creatures) so this was right up my alley. Unlike the other two, this is a perfect encapsulation of what you need to make an effective short. Amelia’s life is defined by her mother to the detriment of her own individuality, a foreign entity arrives and wreaks havoc, causing Amelia to finally do something about the larger issue in her life. The doll itself is particularly haunting and for 1975 its movement is incredibly fluid. There’s a whole essay worth writing about how the film plays with white colonization and the appropriation of African relics as “gifts” (does Amelia have it coming for finding something cute in this present?).

Trilogy of Terror isn’t a classic on par with The Twilight Zone, but it’s a fun feature with a unique premise. Karen Black is amazing to watch in a variety of different guises and Dan Curtis’ assemblage of these stories works far better than it does in The Night Stalker series. Kino’s new Blu-ray release will certainly please those waiting several decades for a proper home video release.