Gazing at Frontier Gal’s opening credits might leave you thinking we’ve already reviewed this week’s film: a Charles Lamont-directed picture starring Yvonne De Carlo and Rod Cameron? Isn’t that Salome, Where She Danced? And put out the same year, no less? Released only eight months after De Carlo’s star-making performance, Lamont and crew gave her a bigger – but just slightly better – role in this stew-pot concoction of Western and domestic drama with a healthy scoop of Taming of the Shrew.

Jonathan Hart (Cameron) is new in town and catches the eye of saloon owner Lorena Dumont (De Carlo). Adverse to his advances, Lorena and Jonathan quickly marry but Jonathan is arrested, seemingly out of Lorena’s hair forever. A few years pass, Jonathan returns and discovers he has a daughter with Lorena, forcing the two to figure out a way to coexist.

Genre mingling isn’t anything new in cinema – you can have noir melodrama or comedic horror films – but it always plays as incongruous when placed against a Western backdrop. Western tropes are so deeply ingrained into audiences’ collective consciousness that any significant blending has be given the proper time and attention which doesn’t quite happen in Frontier Gal.

The film moves from plot thread to plot thread with all the grace of Frankenstein’s monster, trampling what’s been previously established about the characters and creating something new that pays off more as the story reaches its climax. Jonathan saunters into town with all the trappings of the legendary “man in black” – he’s not dressed in suede, after all – doing little to make friends with the locals. “Where you headed?” “Who cares?” A comedic brawl ensues with characters playing a game of “who’s beating who” involving bottles and fists. Our first meeting with De Carlo as Lorena Dumont continues the trend of fantastic De Carlo entrances – jazzy saloon music plays as the camera pans up her mermaid-esque costume.

Lorena’s the “boss turkey” of the saloon – you can just hear the screenwriters saying “this line is genius!” – with a thriving business and a stable of steady customers, but since this is the old West we have to know it’s scummy and, possibly, Lorena’s a prostitute (I’m only reiterating what the film thinks). So, when the film’s third act briefly introduces a bride Jonathan bought in a poker game – I’m assuming, we’re never told to the contrary and they go off into the sunset with zero fanfare – it becomes a battle between the cultured and refined city girl and the lowly frontier gal of the title.

Lorena absolutely despises Jonathan, and there’s little reason why she shouldn’t. His idea of foreplay is to keep kissing her against her will – there’s a reason romance films do the unwanted kiss once….once is fine, three is troubling. Watching De Carlo’s arms flailing as he kisses her again, and again, and again leaves you wondering whether the cameraman never yelled cut or charges should be brought up. Lorena reiterates that she’s not Jonathan’s “girl,” but that’s not stopping her from marrying Jonathan for the bounty on his head. The film could have taken a page out of the Rachel and the Stranger (1948) handbook, taking two characters in an awkward situation and allowing them time to grow, problems be damned. But the closest comparison is Shakespeare’s tale of taming the wily Kate in Taming of the Shrew – a throughline that continues till the end, complete with spanking.

De Carlo and Cameron are fine throughout the film’s first half. The Taming of the Shrew conceit limits them both to wailing on each other so there’s no Oscar-worthy acting put forth. Cameron continues playing the Western’s response to Clark Gable, and he works the Western gag lines perfectly. When he congratulates Lorena’s boyfriend, then punches him out, it’s a Western sitcom element that pays off. Even De Carlo shows a flair for the comedic, telling Jonathan “I don’t want to be a bride; I want to be a widow” before beating on him. (There’s a lot of violence in this movie….without being set in the West.) And De Carlo has never looked more gorgeous. The script, attributed to Michael Fessier and Ernest Pagano, has some solid one-liners, like the townsfolk’s response to Jonathan kissing Lorena – “she hasn’t been kissed since she was a baby” – or how they all get silent, only to go about their business when Lorena sees them. Many of these moments succeed because they belong more to a sitcom or aren’t strictly inherent to the Western genre.

Jonathan returns from jail to discover him and Lorena have a child (played by Beverly Simmons at her most precocious). Now, considering their wedding night involved them slapping and beating each other, when was this child conceived? Are we going down the conjugal rape road? 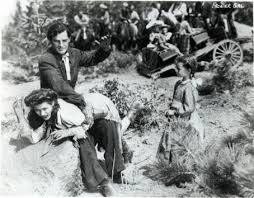 From this point forward the film becomes a custody dispute played out against the lush forested hills of the Universal backlot. Jonathan kidnaps little Mary Ann because he doesn’t like her performing in a saloon in front of men. Maybe if she was Shirley Temple singing “Good Ship Lollipop?” Unlike the wedding night between her parents the scenes between father and daughter are cute in the extreme with Jonathan trying, and failing, at fatherhood and Mary Ann showing how annoying children are. While tonally feeling like an entirely different feature these scenes are hilarious in how unsafe they are. It’s one thing for Jonathan to try to steal his kid’s money, but it’s another to tell her to shoot a rattlesnake in jest, only to have her actually whip a gun out and shoot said snake. You wouldn’t see Shirley Temple’s parents leaving a pistol in her room! And remember how much the Western genre loves spanking women? We actually witness the origin of that trope, with little Mary Ann “realizing” that fathers spank their daughters because they love them….thus her father must love her! I’m assuming Frontier Gal 2 involves Mary Ann finding a man who’ll hit her like her father…think a Western Fifty Shades of Grey!

Lorena goes back to Jonathan to get her child – remember kidnapping? – and the entire thing is quickly sealed with a bow and a happy family. Does it make any sense? No. But what did you expect?

I actually enjoyed Frontier Gal, all things considered, mainly because it’s all over the board! One minute it’s a serious Western and the next it becomes Moonlighting on the frontier before turning into Old West Kramer vs. Kramer (1979). The second half involving Mary Ann is fun, especially because Rod Cameron keeps things light, and Yvonne De Carlo continues to do little more than prance, but she’s given more in the end than her previous film. Frontier Gal is just so wacky that I can’t say I didn’t enjoy it.