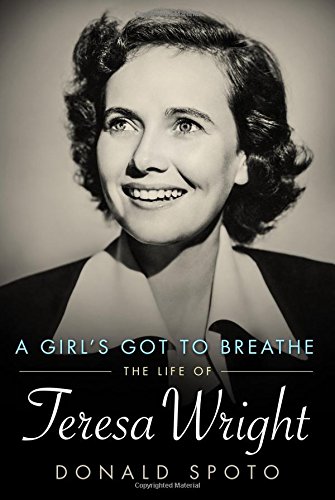 I’m kicking off a new year of classic film biographies and you can’t start with an author better than Donald Spoto. The acclaimed Hitchcock biographer has covered nearly every facet of the Master of Suspense’s life and career, including the women he employed. Spoto’s also recounted the lives of Hollywood’s most beautiful women, like Audrey Hepburn, Grace Kelly and Marilyn Monroe. For his latest tome he’s combined the two subjects to create one of the first comprehensive biographies of Hitchcock star Teresa Wright. Oscar nominated two years in a row – for three different films – Wright’s career burned like a bright flame until her desire to mitigate her family life with her career brought things to a halt.

Everyone has their favorite Teresa Wright role, whether it’s her inquisitive Charlie from Shadow of a Doubt (1943), determined wife Eleanor Gehrig in The Pride of the Yankees (1942) or the woman who helps a depressed Dana Andrews in The Best Years of Our Lives (1946). She didn’t enjoy layering makeup on her face reflecting back on her characters who were simple but never simplistic. Wright wasn’t glamorous, mysterious or hard-edged which rendered her attractive and memorable.

Wright never aspired to be a star, content to find challenging roles, and that could be compensation for a less than stellar childhood. Wright’s mother was a prostitute known for “entertaining” with her daughter in the same bed who abandoned her at a young age. This abandonment fostered a deep desire in Wright for family which Spoto showcases without saying Wright had mommy issues (Wright does have some similarities to Spoto subject Monroe.) The actress paid her dues on stage before entering Hollywood, and she made quite the impression! It’s remarkable to think that her first role on film, ever, was opposite Bette Davis in The Little Foxes (1942) where Wright more than holds her own.

Wright suffered a fate similar to other stars of the studio era, suspended for refusing to work. Why did Wright refuse? Because she got pregnant. Her pregnancies and inability to film led to a falling out with regular producer Samuel Goldwyn. Wright knew she was only as good as her last paycheck, and in order to survive she took roles for smaller payments, leaving Hollywood to undervalue her for the rest of her career. The numerous interview subjects Spoto includes maintain Wright was one in a million, a genuinely nice person with nary an unkind word. Her home life was fraught with the difficulties of most households, albeit living in a higher tax bracket, that only aids in bonding readers to her story. She truly was exceptional.

“A girl’s got to breathe” is a line Wright said to Gary Cooper in the aforementioned Pride of the Yankees. Wright’s desire for breathing room in her life put her at odds with Hollywood. Despite the legendary films she starred in, most people are hard-pressed to list her as one of the more memorable stars of the Golden Era. Donald Spoto’s book expertly illustrates why this thinking needs to go!

Interested in purchasing today’s book? If you use the handy link below a small portion will be donated to this site! Thanks!

8 thoughts on “A Girl’s Got to Breathe: The Life of Teresa Wright” Leave a comment ›